I performed the odious task of setting up my CGE Pro in my front yard so I could determine whether it was still having the same problem with it I had at the star party in September, and what exactly the behavior was.  I started building it before sunset, but it went faster than I expected, although I did bruise my knees and almost fell down the stairs carrying the mount head down.

It was an interesting sight, seeing that enormous scope set up in my yard!  I attracted a number of passers-by who were curious as to what the heck that thing was and what I was doing with it.  I showed the Moon and Jupiter to about 10 people! 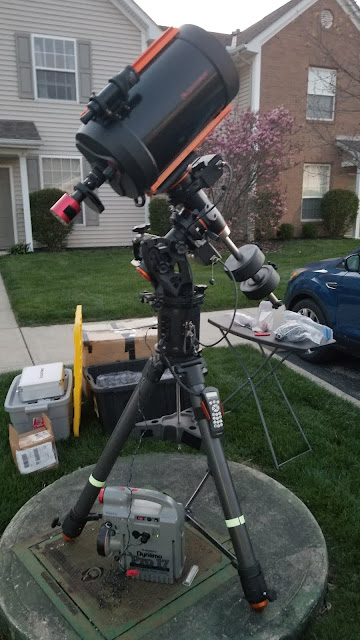 I slewed the scope all around, and saw that the behavior was still the same – all kinds of jitteriness in the declination axis, but buttery smooth in right ascension.  It seemed to be the same all over the sky.  I made sure I was balanced as well.  I didn’t have time to set up guiding to see how that was working, but I did take some videos, both of slewing with the camera attached and using my cell phone to record sounds and motion.  I sent these all off to Dr. Clay, who came back with some advice later in the week to tighten the central shaft and maybe put some WD-40 down in it.  Hopefully I can get it working at the Texas Star Party.

I took some images on Jupiter while it was up, but I have a hard time pulling the C11 into focus on planets, since it’s easily affected by the seeing conditions, and the seeing wasn’t very good.

Can't wait for the dark skies of  Texas!!

Posted by AstronoMolly at 3:07 PM