And so it was, on the sixth night, after days of burning the candle deeper and deeper into the night, chasing moonrise back until it was afraid to show its face until dawn, I, Molly Wakeling, hit the wall.

Friday night started out cloudy after not winning anything the first night of the Great Texas Giveaway, but then cleared up as promised after 2 AM.  After seeing some fantastic images of the Rho Ophiuchi region taken by another astrophotographer, I just had to try again, this time with 10-minute subframes.  But how to get 10-minute subframes when I can barely do two minutes on the Vixen Polarie?  The answer lay with the Borg.  Resistance was futile, so I rigged the scope for piggyback mode. 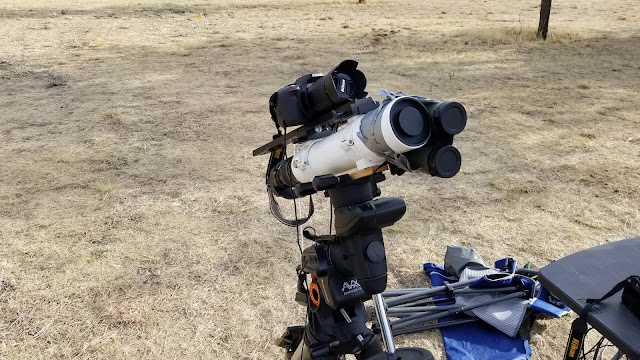 The reason I piggybacked it instead of attaching directly is that I needed to be able to guide in order to achieve 10-minute subframes, I was pretty sure.  So I pulled my 11-inch Vixen-style dovetail out of my support supply box, which I previously used to piggyback the Borg on my 11-inch to use as a guidescope until I got the Celestron guidescope on its Losmandy rail, and slide it into the dovetail clamps I leave on the Borg.  I just flip the Borg upside down and back for either mounting it on the C11 or attaching it to the AVX.  For the AVX, it has a small dovetail made, presumably by the previous owner, of wood.  Very clever, but not terribly stable, nor long enough - I will soon be replacing it with a plate or something.  With the SBIG detached, I also removed the waterbottles on the front, but kept the binoculars.  What a beautiful instrument of science.

With the 55-200mm lens set at 95mm and f/4.5, I loaded the previous night's alignment and slewed to the star Antares.  Using the DSLR's viewfinder (the good ol'-fashioned way), I adjusted the scope until Antares, the star Rho Ophiuchi itself, and the other stars in the vicinity were where I thought might work well to capture the region and its beautiful dark rivers.  After 1-minute and 5-minute test frames, I went all the way to 10 - and still got nice round stars!  (Very easy at that short of a focal length.)  All the while, I was dreaming of my bed.  The desire to be horizontal was powerful.  All of my astro-buddies had gone to bed, so I was out there alone.  Once the images were going, I set my alarm for 3 AM, when it was going to cross the meridian so I could do a meridian flip on the scope, and I got comfy in one of the reclining chairs.  Unbelievably, I did actually fall asleep for a bit (I am absolutely terrible at falling asleep any place besides a bed).  I woke up when my alarm went off, disoriented and feeling ill.  I staggered over to the telescope, did the meridian flip, attempted to visually put it back in the same spot (I didn't download the index files for AstroTortilla to be able to plate-solve images that wide, not to mention I didn't have the calculations on hand for what my actual FOV was to give to it), and took one or two more subframes, but they were way not in the right position, and I just didn't have the mental energy to continue.  So, with the sky still clear and dark at 4 AM, I dishearteningly shut down the computer, covered the scope, buttoned everything up in case of morning rain, and wandered to bed.  Pretty sure my path was quite zig-zaggy.  I didn't even brush my teeth, just threw on some PJs, put my retainer back in, and passed the heck out!

Overall, I did much better than last year as far as late-night energy goes, but this was my absolute limit.  It helped that I got nearly 6 hours of quality sleep a night that week, sleeping in until 11 or 11:30, thanks especially to my quiet roommates and my quality sleeping mask.

So, was my suffering worth it?  ...I'd say so!  My definite goal for next year is to get more subframes (although it's a week earlier, so the Milky Way will rise even later!), but this came out quite nicely for only four subframes! 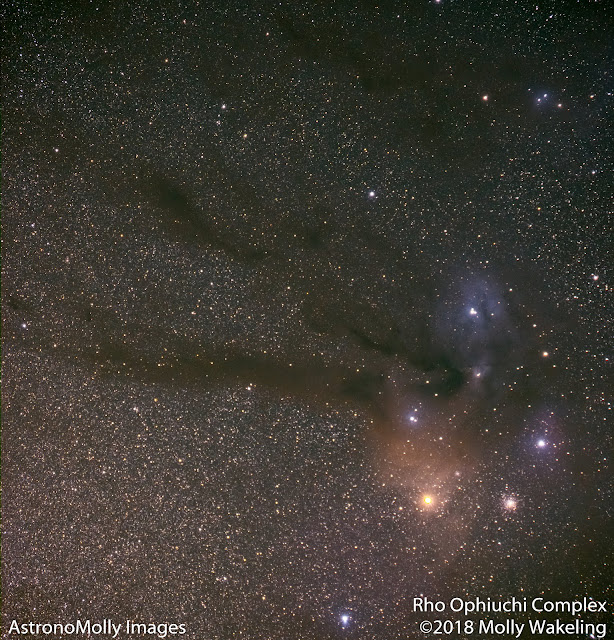 It's a tough region to capture, but this was cool!


Next post: Texas Star Party 2018 Summary: Walking in the Light of the Stars

Table of Contents
Posted by AstronoMolly at 5:58 PM