I managed to sleep in all the way until 11 AM, and I trotted off directly to lunch after getting up and getting dressed.  Two cups of coffee for me - I was feeling prettttty out of it!  Also a couple Tylenol.  After lunch, I worked on processing images and getting caught up on blog posts, and then headed over to the "Eclipsathon" - a gathering of eclipse-goers to share stories from the August 21, 2017 solar eclipse, along with pictures and videos.  After I gave my bit, I got a text from Miqaela, who had gone into Fort Davis with another club member, asking me to put her laptop away because it was raining in town!  I went outside, and I could see rain clouds rolling in. 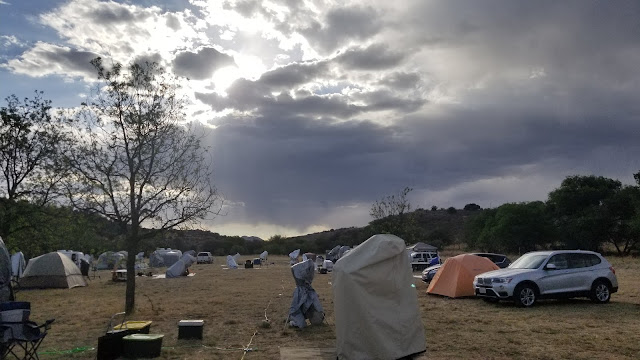 So I quickly put her laptop and all of our cardboard boxes into my car, and made sure everything else was covered up and secured for all of my fellow club members and neighbors.  Then I ran back up to the lecture hall and made an announcement about the oncoming rain, which prompted about half the room to dash out to make sure all their gear was secure.  It rained pretty hard!  But everything was safe and sound, at least in our corner.

Once it got dark, I got my gear uncovered and set up another timelapse on my other DSLR to watch my scopes move and the Milky Way rise.  It was cloudy most of the evening, and it was kind of neat to see because in a place where there's very little light pollution, the clouds are black.  Sometimes it's hard to tell whether there are actually clouds in a given area or not! 15-second exposure on my Nikon D3100, part of my timelapse sequence that night.

I finally made some progress on my CGE Pro mount!  I put an eyepiece on it to see how bad the jitteriness still was, and I popped open the motor casing to adjust the worm gear again - it was still binding a bit, so I loosened it a bit more.  When I put a little pressure on the eyepiece to mimic the weight of my camera that it's balanced for, there was very little of the bounciness!  Progress!  So I put the camera back on, re-aligned (it can move a tiny bit during the day with the wind), and took some test images.  The stars looked nice and stable while I was guiding!  Finally!!  I took the camera back off and put an eyepiece back on to collimate, since I learned that I'd been doing it not wrong, but not the best way either, and got it pretty close.  Zenith had cleared, so I used Arcturus, which was quite high by that time of the night.  Since there were still quite a few clouds passing through, I pulled my chair over to the circle of astro-friends and chatted over drinks, since the forecast said the skies might clear.  And clear they did, around 1:30 AM - showtime!  Since the Milky Way was still kind of low, I pointed at M104, the Sombrero Galaxy, and took luminance frames on that, this time making sure the cooler was on.  They looked much better! 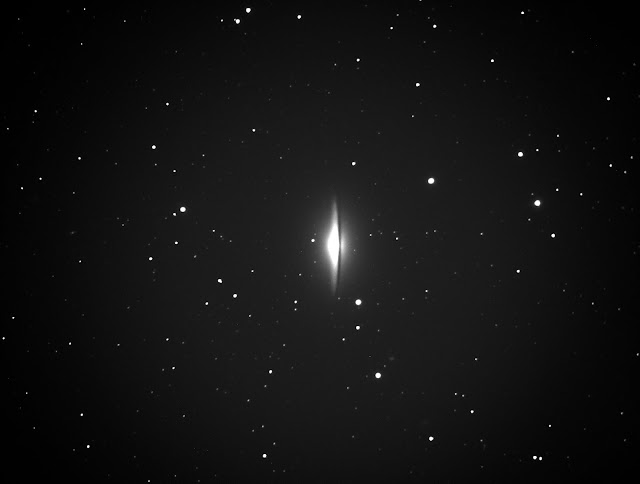 Guiding did get weird after a while though, but it was getting lower toward the west, so I switched targets to the Iris Nebula and got a full set of luminance frames on that as well.  Next I'll get the RGB frames!

Over on the Borg with my Nikon D5300, I pointed that over to the Snake Nebula, Barnard 72.  Miqaela became interested in this target a while back, and I thought I've give it a try too.  She's gotten some phenomenal images on it, and I'm pretty stoked about mine too!  I lost the last few subframes to moonlight just before 4 AM, but got over two hours of data on it.  But it came out AMAZING!! 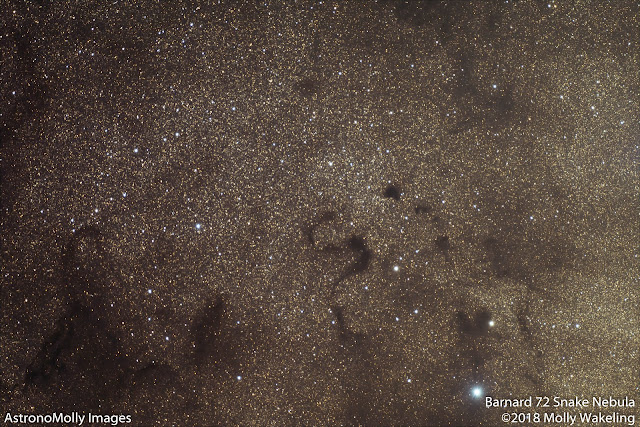 Next, I'm going to take the Borg off of my AVX mount and attach my 55-200mm Nikon lens to my DSLR and attach that to the mount without a telescope so I can get a nice wide field of the Rho Ophiuchi region.  I tried last year, but was too zoomed in and didn't get the result I wanted.  We shall see!

The clouds stayed away the whole rest of the night, and the sky was absolutely incredible.  Other people went to bed, but my persistence paid off big time!  I also got some great shots of the Milky Way using my Vixen Polarie star tracker to allow me to take 30-second exposures (my D3100 can't be automated for longer than that), but of course I forgot to switch to raw -.-  So I will be repeating those tonight if the skies hold out. 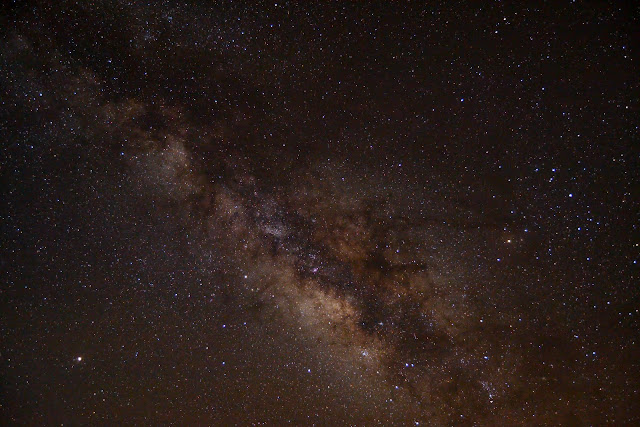 Once my imaging rigs got going, I de-tarped my 8-inch Schmidt-Cassegrain and started working on the "20 Stinking Planetaries" observing list.  Each year, the Texas Star Party puts together special observing lists, and if you complete them, you can earn observing pins!  This will be my first observing pin, to pair with my Outreach Award pin from the Astronomical League.  I'm going to need to put these on my hat or something soon here.  My Celestron NexStar mount is goto, so it was a lot quicker for me to find them than people using push-to mounts, although the observing list planners prefer people to do push-to.  But I'm a newbie, and I did have to use reference stars a few times to find some of the extra-tiny ones.  I made it through 16 last night, so getting there!  It included the easy-to-spot ones, like the Ring Nebula and the Dumbbell Nebula, as well as a number of ones that are very difficult to distinguish from stars.  There was one, NGC 6781, that wasn't just a tiny disk, but was actually rather large, and definitely something I could image!  I'd probably have to image it from here because it's quite dim, but it was pretty.

Staying awake so far, and ready for more!


Table of Contents
Posted by AstronoMolly at 12:55 PM