After wrapping up a session of playing Minecraft with a friend of mine after both of us were yawning and saying it was time for sleep, I looked outside and saw it wasn’t as cloudy as Clear Sky had predicted, and suddenly I was quite awake and decided to set up my gear for imaging Jupiter and the moon!  (I was building a giant floating observatory in Minecraft...) 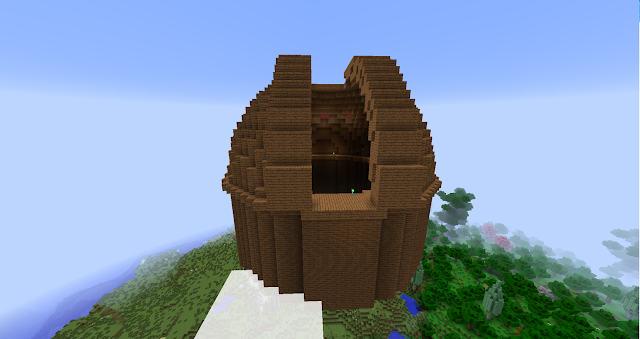 Maybe I'll share another screenshot or two when it's all done...I'm going to put a telescope in it, and the interdiction torches have been replaced with red lamp squares.
The choice of redwood planks was to match the ring of redwoods this sits beside.
I used Plotz for the plan - it can also do spheres!

Of course, as soon as I was set up ready to go, clouds rolled in…I attempted to image in between the cloud banks, but it just wasn’t going to happen with Jupiter, since I needed all four color channels, and it rotates rapidly.  Also, my frame rate wasn’t very high, only about 19 fps with a small ROI (region of interest) on Jupiter, and only 1 or 2 fps full-frame on the Moon.  I couldn’t choose too small of a ROI for Jupiter – I had set up the camera to be attached to an eyepiece projector, and I had a 25mm eyepiece inside, which gave a pretty magnified view to the camera. 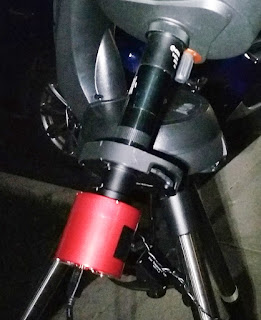 I'll just come out and say it, it looks kind of ridiculous.

The seeing didn’t really support planetary imaging anyway, I’d say it was about 2/5.  But since I was set up, I decided to image the moon anyway, since I only need luminance for that and not also RGB (the moon is quite gray), and maybe I could get enough clear frames to get a decent result with the magic of RegiStax.  It didn’t pan out, unfortunately…but I did get to try out eyepiece projection with the ZWO, and on nights with good seeing, there is definitely potential! 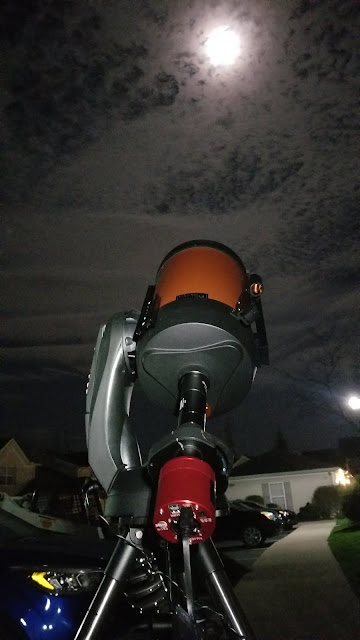 Probably the most badass picture of a telescope I've ever taken.

Even in Minecraft, I accidentally started the observatory build in the level where the clouds float through, so I had to make the floor two blocks thick so that I didn't have clouds dusting the floor constantly.

Table of Contents
Posted by AstronoMolly at 12:24 PM