The second night began partially clear, and then cleared up after sunset.  I honed in alignment and polar alignment on my two mounts, and tried out the polar alignment routine in SharpCap for the first time, which was way super cool and very easy!  Well, it would have been easier if the altitude adjustment knob on my CGE Pro wasn’t such a bear to turn.  Luckily, I got some help from my neighbors – one of them had this tool with an adjustable rubber neck that grips the knob, and then I was able to turn it without as much difficulty.  Earlier that evening, after I got my D3100 set up on the upper field to do an all-night timelapse, I went and found some of the Celestron reps to get their advice on the mount issues.  They didn’t have any mount experts present, but I got some advice on how to potentially get around the issue, which was to lower the aggressiveness of guiding and lower the frequency that guide commands are sent in PHD so that it’s not trying to guide out the bounciness after a correction is made.

Once I was all ready to go, though, a long line of high cirrus clouds rolled through the eastern sky, but it was clear down to the south, so I imaged Omega Centauri instead.  Omega Cenauri is a massive globular cluster located in the deep south in the constellation Centaurus.  It lies about 15,800 lighyears away, and is the largest globular in the galaxy at 150 lightyears across.  Even at that distance, its angular size in the sky as seen from Earth is slightly larger than the full moon.  Globular clusters are tightly bound collections of stars that usually exist in the halos of galaxies, and sometimes pre-date the galaxy itself, and Omega Centauri's average age is around 11.5 billion years old.  This one contains as many as 10 million stars! It may also have a black hole at its center.   The seeing was so bad that close to the hilltops that guiding wasn’t really working at all, since it kept losing the guide star, so I just took 20-second subs.  In addition, my C11 is very susceptible to the seeing conditions, so the frames turned out pretty mushy.  I deleted the whole dataset.  But I also imaged it on my Borg with my Nikon D5300 attached, and since the aperture and FOV are so much smaller, it looks a lot sharper.  I had to delete quite a few subs when clouds started covering that area too, but it’s not a dim object (I could see it with 5-second subs on my ZWO camera when I was centering it), so I took 2-minute subs since guiding wasn’t working on that scope either, and I don’t need a ton of them.  Unfortunately, I have not been taking 2-minute darks, so I had to stack without them. 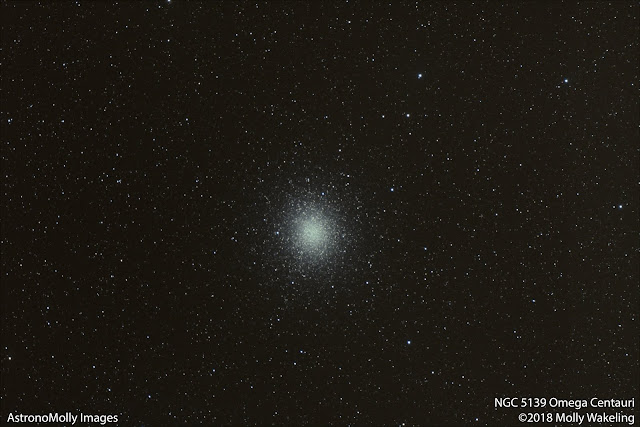 Over on the C11, I imaged Omega Centauri as well, but that scope is particularly susceptible to bad seeing, so it didn't turn out very well.  After I got a full set of LRGB, I found a target in a clear part of the sky – M64, the Black Eye Galaxy, which was on my imaging list, but further down.  I got luminance and red frames on it before the moon came up around 2:30 AM, but I realized when I was shutting down that I forgot to turn the cooler back on after doing the polar alignment routine.  Ultimately, it was too cloudy to see if guiding was going to work in the east, so that will be my first task for tonight.  I’m hoping that my polar alignment is good enough to avoid needing to guide in dec.
After 1:30 AM, it cleared up some more, although the transparency and seeing were still pretty bad.  I slewed the Borg over to the Snake Nebula and started capturing that.  Dark nebula are all but impossible from light-polluted areas, so it was so cool to see it!  I need more data before I can stack, but I’m pretty excited about it.  My minion Miqaela got a few really nice subframes on Sunday night as well, but the moon is rising not long after the Milky Way until later in the week, which doesn’t give us much time.
I tried out another new tool tonight, in addition to SharpCap’s polar alignment routine – I finally ran AstroTortilla!  It for some reason couldn’t plate-solve my ZWO images on the C11, but it ran fast and accurately on the Borg with my Nikon camera!!  Earlier in the evening, as the clouds were just rolling in, I was going to take more subframes on M97 and M108, so I gave it a JPG screenshot of one of my subframes from the night before, and it ingested that, took a picture with my Nikon (I had slewed to M108), slewed the scope, and then it was exactly where my subframe from the previous night was!  It was truly magical.  It plugs into BackyardNikon to take the image.  I had to change a few settings in BYN, mainly just the port number it was talking through, and then it worked just fine.  I’m not sure why it’s having a hard time solving my ZWO images – it should have plenty of stars with only a 5-second sub, since that camera is quite sensitive. I’ll try a longer sub next.
The moon rose at 2:30 AM, and everyone else had gone to bed because of the earlier clouds, so I packed up and retrieved my camera from the upper field, which had been going all evening.  My D3100 doesn’t work with an intervalometer for some reason, but it does work with a wireless remote shutter (on the same port, no less).  So I rubber-banded a piece of plastic I found in a desk drawer at the JB observatory last winter to the shutter button, velcro’d it to the tripod, taped over all the lights with gaffer’s tape, plugged the camera into power from the AC pedestal that powers the entire upper field, and let it run!  I just used batteries for my D5300 down on the lower field, since the screen can close on that camera, so the batteries last much longer (and I’m right there to replace them as opposed to having to make another trip up to the upper field).  I slept until 11 AM, when my alarm went off.  I feel pretty out of it today, but I’d better bolster myself with coffee because I’ve got several more nights ahead! 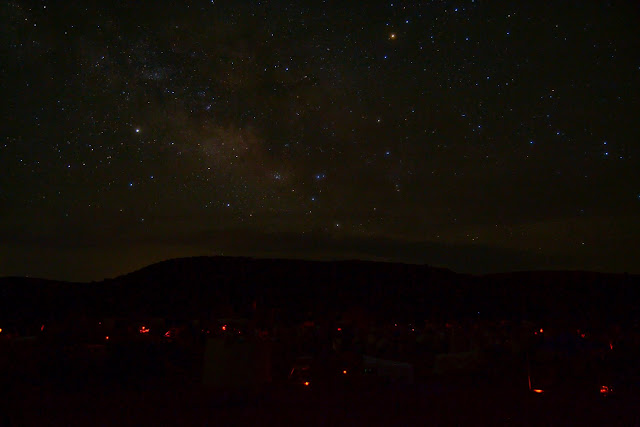 Posted by AstronoMolly at 6:44 PM