Texas Star Party 2018 Summary: Walking in the Light of the Stars

This was my second year attending the venerable Texas Star Party, the mecca of astronomers all over the country, and even around the world - we had visitors from Australia, the UK, and Kosovo as well!  And for good reason - it's well-organized, supports a large number of people, and has fantastic dark skies and a high probability of clear, dry nights.  I didn't need my dew heaters at all the whole week!  It was worth all the vacation days I had to take from work.  Even though I was busy either taking or processing images the whole time, it still felt like vacation to me - being outside, especially under the stars, getting some fresh high-altitude air, wearing shorts and t-shirts and hats, talking to all kinds of strangers-made-friends, and even working on my tan while I was copying data, messing with my gear, or setting up my next timelapse sequence.

I did get to do a little sight-seeing - with all of the image editing I was doing (I just couldn't wait!) and log entries I was trying to keep up with, I didn't make it off the ranch the entire week until I went on the McDonald Observatory tour on Saturday.  We saw the same two telescopes as last year - the J Harlan Smith 107" Cassegrain reflector and the 300" Hobby-Eberly Telescope - but it was still cool to see them again, especially with Miqaela.  Also, this time, I got to operate the Smith telescope! 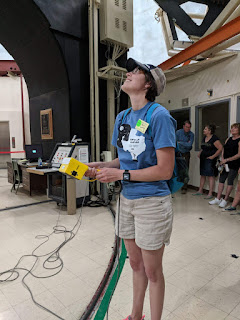 Saturday night, Miqaela won a set of Moon, Mars, Jupiter and Saturn maps (woo hoo), and then we set out our chairs with the folks around us and enjoyed some drinks in the warm air under fairly cloudy skies.  Despite the cloudiness, we managed to do a fair bit of astronomy - we saw Venus, Jupiter, the Big Dipper, a satellite, and several other stars as they peaked through the clouds.  I had a great conversation ranging from the Borderlands video game series to Dungeons and Dragons with two younger guys near where we were set up, and later one of the Aussies came over and regaled us with the tales of their US tour thus far.  I packed it in at 1 AM because Miqaela and I still had a long drive!  Fortunately, we had done most of our packing between dinner and the Great Texas Giveaway, although that meant I had missed part of that evening's talk.

This year's Texas Star Party was a blast, and I fulfilled one of my other imaging goals as well, besides the Rho Ophiuchi region: more timelapse video!


My week in numbers:
- 3,000 miles behind the wheel
- 192.8 GB of data (83.8 GB of astro data, 109 GB of timelapse)
- 6 nights of imaging
- 3 telescopes
- 2 guide scopes
- 6 cameras
- 3 mounts
- 4 tripods
- 6 counterweights
- 3 laptops
- 6h45m average sleep per night (including travel nights)
- 20 Stinking Planetaries observed
- 1 excellent star party!
And yes, we managed to fit all this, plus Miqaela's two cameras, two telescopes, guide scope, counterweights, mount, and two tripods, plus all of our data cables, power cables, two folding tables, a step stool, boxes of accessories, adapters, tools, nuts, bolts, and batteries, and warm clothes, cool clothes, sleeping bags, pillows, folding chairs, blankets, and snacks into my 2017 Ford Escape.  Because I am a Tetris champ!  And I definitely inherited my skills from my mother, passed down from my grandfather :D  Hanging out with my fellow club members and their friends and family was a real treat, and my minion Miqaela also got some fantastic images, including this one of the Snake Nebula! 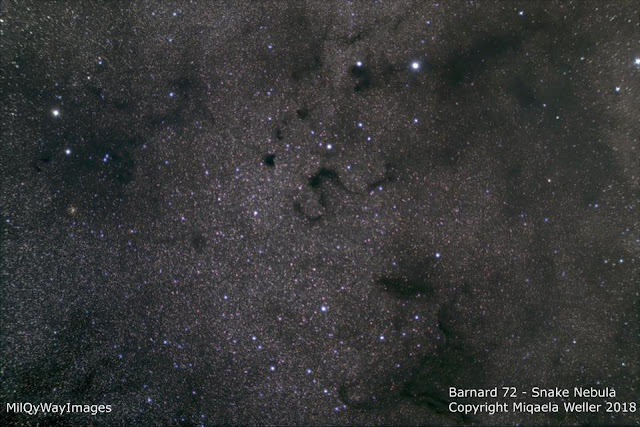 The last night, Saturday, cleared up as well, and we got to enjoy a few more hours under the dark Texas skies.  Walking in the light of so many stars is surreal.  You look up, and there just so many.  The Milky Way is a mottled smear thrown across the sky, filling up half of it, almost appearing like someone tore a hole in the dome.  Up at the top of the Milky Way, in the region of Cygnus, it feels like you can count every individual star of the thousands that are shining brightly above.  The stars feel close, like you could reach out and touch them, or fall upward into the sky and become lost in the inky depths, grabbing them by the handful and pulling them toward you in an embrace.  Looking through a telescope at the many dimmer wonders, such as nebulae, galaxies, planetary nebulae, and globular clusters, looks like an image, like someone hung a print of an astrophoto in front of the telescope.  Globular clusters reveal thousands of tiny dots; galaxies show off their spirals and their dust lanes, inviting you to come explore; nebulae look three-dimensional, as if you were flying through them in a spaceship, plying the waters of the Lagoon Nebula or soaring with the Eagle Nebula.  It is no wonder than ancient cultures paid so much attention to the sky and filled their lore with tails of the shapes traced out by the brighter stars.  The night sky instills wonder in people throughout the ages, inspiring art, religion, science, and poetry.  It drives us forward to dive ever deeper into its depths, to answer the call from across a vast distance.  First with our eyes alone, carefully plotting the motions of the stars, moon, and planets; then with instruments to aid our viewing, small telescopes and then ever larger ones; then with cameras, their unblinking eyes capturing photons emitted far away and long ago to reveal the structure, history, and unfathomable beauty of our shared universe; and then, finally, with ships, vessels that carry our technology and ourselves off the surface of our origin, away from our cradle, and out into the empty traverses between the stars and the galaxies, searching for answers to the most fundamental questions, and walking in the light of other stars.

The dark skies call, and I must go. ✨


Table of Contents
Posted by AstronoMolly at 7:13 PM