It's Memorial Day weekend!  And that means camping at the observatory!  Earlier that afternoon, however, I decided not to camp after all, since it looked like it was going to rain and thunderstorm starting in the morning.  Also, I just didn't feel like it.  I was originally going to test out using my 8-in SCT on my Celestron AVX mount, but once I had all the equipment staged on my living room floor, I decided I really didn't want to load it all in the car for a half-night of moonlit imaging.  Maybe I'll experiment in my front yard first.  We'll see.

Even though it was strongly moonlit, it was rather clear, so I decided to set up my ZWO camera on the club's 5-inch refractor anyway.  First, before astronomical twilight was fully over, I slewed over to the moon to focus, and I also grabbed a full-frame video on it, since the full-frame video I took on my 8-inch on Thursday night was unreadable to RegiStax for some reason and made it crash.  The final processed image came out great! 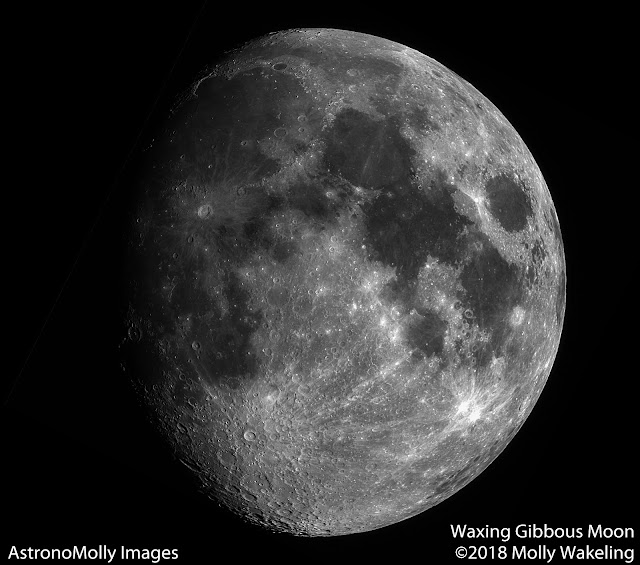 I loooooooove my ZWO!  Such awesome contrast and dynamic range, even though it's only a 12-bit ADC!  What a great camera.

Once twilight was mostly over, the sky was really bright with moonlight, so I picked a bright object to image - the Needle Galaxy, NGC 4565.  It's also fairly large, so a good target for the refractor.  Most galaxies are too small to image well with such a large field of view.  I was going to do M51, the Whirlpool Galaxy, but it was too high and was getting cut off by the top of the dome.  The Needle Galaxy was closer to the moon, however, which made the background pretty bright in all the images.  Despite the moonlight, I got a nice result!  It caused a lot of noise in the background of the image, since any additional light increases the incidence of shot noise and other sources of noise, so I had to cut pretty far into the histogram in order to make the background look nice.  Despite that, it came out quite well anyway! 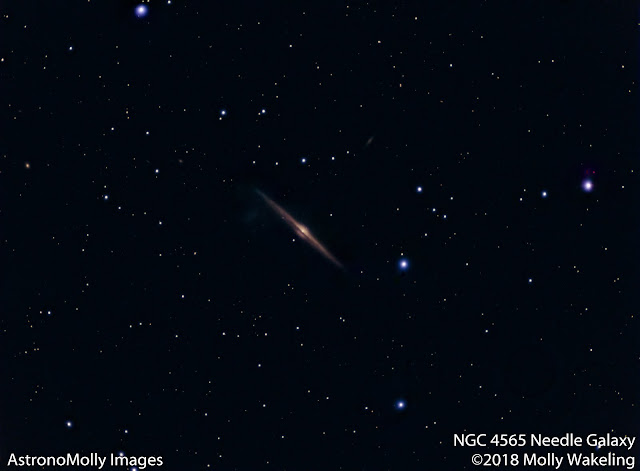 Once I got an hour's worth of luminance data on a half hour's worth on each RGB channel, I packed up and called it a night.  I wasn't going to camp, so I needed to leave around 2 AM in order to be awake enough to drive home.  A fruitful night, given how bright the sky was!

Table of Contents
Posted by AstronoMolly at 9:39 AM