The first night at Texas Star Party was gorgeous!!!  No clouds until about the time the moon came up around 2:30 AM, and so many stars!!

The Texas Star Party is an annual gathering of nearly 500 amateur astronomers at the Prude Guest Ranch near the small town of Fort Davis, TX.  It is located far from city lights, and is a mecca of astronomy.

This is my second year attending, and I brought my minion Miqaela along to experience this awesome week-long event.  It definitely takes some seriously planning!  I brought two imaging rigs, Miqaela brought hers plus another telescope, and I brought my visual observing setup as well.  My two rigs consist of:
Rig 1 - "The Beast"
Rig 2 - "I Could Just Pick This Whole Thing Up!"
Visual Observing - "My First Telescope"

Cameras:
As well as all of the supporting gear, like table, step stool ("The Beast" is taller than I am!), power cables, three laptops (two for running my rigs, one for processing data), dew shields, tarps and bungee cables to cover them during the day, dew heaters, eyepieces, and my tackle box with batteries, nuts & bolts, adapters, velcro, and other odds and ends.  Two of my fellow club members graciously offered to take some of my gear so I could also fit all of Miqaela's gear - her Celestron AVX, Orion ST-80, Celestron 130 SLT (her Newtonian), her two Nikon cameras, and all of her support gear.  I passed off my visual rig and my AVX mount, and we jammed the rest into my car using my mad 90s kid Tetris skillz. 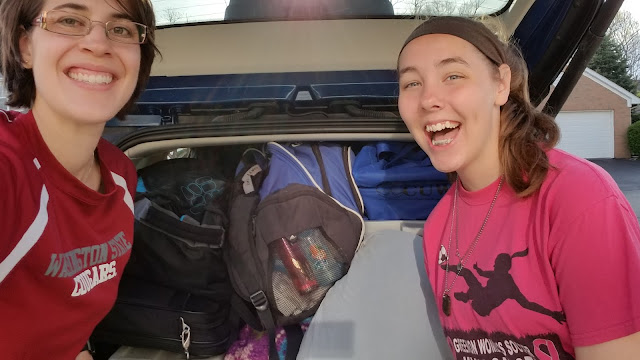 The drive down was pretty uneventful, but also quite long!  The only problem we really had was with my Thule Sidekick rooftop cargo carrier, which just couldn’t stand up to the highway, apparently – the front was forced open, and eventually the whole top was shifted around enough that the latches came undone. 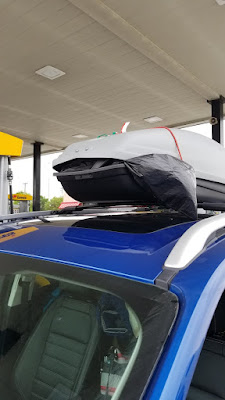 Luckily, I had the foresight to wrap the whole thing in a bungee cable just in case, so nothing was lost.  And we had everything bagged in garbage bags.  So every time we filled up gas, I re-opened and re-closed it to try and stay together for a little while longer.  I posted a tweet to Thule’s Twitter, but it looks like it hasn’t been active since last November, so I don’t expect a reply.  I’ll probably express my disappointment some other way, I guess.
We arrived at Prude Ranch shortly before 3 PM on Sunday after two and a half days of driving, got checked in and dropped off our personal gear at the bunkhouse, and then unloaded and started setting up our telescope gear.   Our AVX’s set up easily, but to add insult to injury with my CGE Pro, the tripod was being problematic as well.  When I got it from my uncle, one of the tripod leg bolts had the plastic grip broken off, and I got tired of adjusting it with a vice grip pretty quickly, so I went to Lowe’s and got a replacement last year.  The replacement doesn’t grip very well, however, so I can’t extend the leg and put it under load.  So that’s one leg out for leveling it.  Then, I was adjusting another leg, and broke it – it pulled out a gnarled mess of a helical coil.  So now I have to get a new helical coil and a tool to insert it with, or find someone who has a tool.  Oh, and find a new bolt.  Long story short, the mount is not level!  Part of my problems. 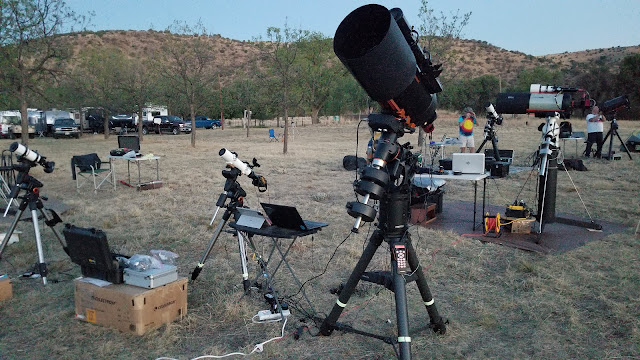 "The Beast" on the right, and its shadow on the left.  Miqaela's rig is on the far left.
With some help from a few gentlemen in the vicinity of my setup location, we removed the housing around the dec motor, and I was able to turn the set screw that holds the worm gear to the big cog that is the dec drive.  Immediately, the rocking back and forth that I was seeing previously vanished!  Since the star party last September when I started having these issues with the declination axis, I was able to physically rock the dec shaft back and forth a little.  I slewed dec all the way around, and it sounded all right.  Then I loaded it up with the scope, guidescope, focuser, and camera, and we could hear it binding a bit in parts, so I loosened it.  When we got a few stars so I could check whether it was smooth, it was sort-of fixed: slewing looked buttery smooth in the western sky, but was still jumpy and jittery in the eastern sky, which is unfortunately where all of my imaging is taking place this week.  After trying to adjust it a little more, I finally just went ahead and aligned and polar aligned it.  This is a task in itself, although the alignment part is much easier now that I have finally fixed my Telrad.  Polar alignment is tough, though – that stupid altitude adjustment knob is just so hard to turn.  I got some help, though, and we were able to get it polar aligned.  Of course, this is only so good when you’re not level.  -.-

Usually, I’d hope for a not great night the first night because getting everything built, aligned, polar aligned, and de-bugged of random issues that crop up takes a while.    I didn’t start getting images until 1:30 AM as a result, and that was on the AVX – I was still working on the CGE Pro at that time.  But I finally got the CGE Pro aligned, polar aligned, and re-aligned.  In PHD, I set it to only guide north in dec, which is the smoother direction right now.  It slowly drifted over time, so about every half hour I had to re-set the guide star, but I was able to get a reasonable number of mostly-stable 2-minute subframes.  Luckily, the ZWO ASI1600MM Pro is particularly well-suited to short exposures.  I forgot to center the Iris Nebula before taking off on imaging it, but this was more of a test to see how many subs I could get with OK guiding.  I think I also may need to collimate a bit, but most of the blurriness I think is poor guiding due to the dec issue. 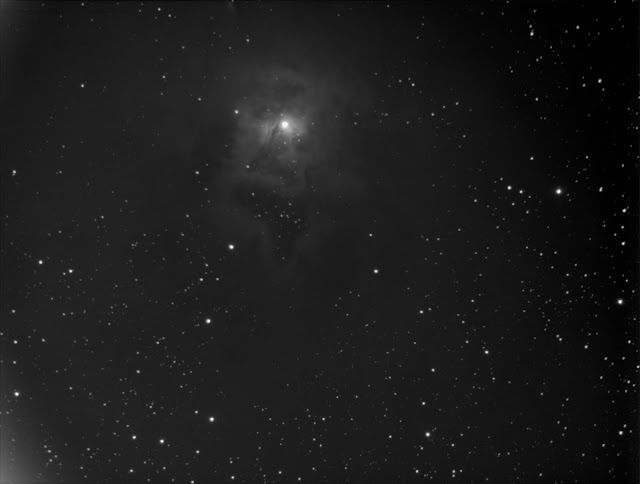 Very promising!!  Hopefully I can get my mount working again and do better.  There are some Celestron reps here, so maybe one of them has some knowledge on the mount and can offer some suggestions.  Also, another neighbor is going to pick me up a small piece of wood or something to put under one of the legs so that I’m closer to level.
The AVX didn’t guide terribly well either, but it’s got such a wide FOV that unless you zoom in, the images look pretty decent.  I don’t have a long enough dovetail for the Borg, so it’s terribly unbalanced in declination.  Maybe I’ll strap something to the end of it to balance…
This one of M97 Owl Nebula and galaxy M108 came out pretty well!  I’ll probably get more data on that tonight. 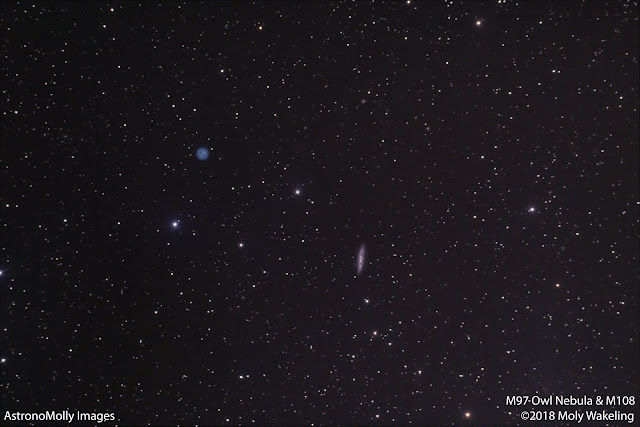 It’s a little noisy, and I forgot to move a copy of Carboni’s tools over to my laptop after I had to do a clean install of Windows, but it’s a good start!  M97, the Owl Nebula, is a planetary nebula, which is the end stage of medium-sized stars.  They're not massive enough to go supernova, so instead they shed off the outer layers of gas that they can no longer hold onto until all that is left is the core, which is a white dwarf.  Our own sun will eventually look something like this.  It's located about 2,030 lightyears away in the constellation Ursa Major, well known for its Big Dipper asterism.  It's about 8,000 years old.  Much older, larger, and much farther away in this image as well is galaxy M108, a barred spiral seen edge-on from here on Earth, located 45 million lightyears away.
It’s pretty hot down here already, but that makes the evenings not too cold either.  I was fairly warm in my hiking boots, thick socks, sweater, coat, and hat.  The wind was pretty low once the sun went down, except for a few upticks every once in a while.
While my images were going, I set up my 8-inch visual rig eventually, but didn’t dedicate much time at it yet.  I looked at Jupiter, Saturn, Mars, and the Cat’s Eye Nebula.  I did look at a few things through other people’s scopes as well – the Blinking Planetary Nebula (so named because it appears to blink when you look at it, and then look away, and look back – it really pops when you look at it with averted vision), M51 Whirlpool Galaxy, M104 Sombrero Galaxy, what was potentially the Whale Galaxy, and M81 & M82.  One treat of being in Texas is that the giant globular cluster Omega Centauri comes up about 12 degrees above the horizon, which is just over the hilltops around the ranch.  It’s a real treat, especially looking through someone’s Nagler eyepiece in a big Dobsonian-type telescope.  The seeing wasn’t great, especially within 25 degrees of the horizon or so – there was a lot of dust in the air, since it’s been dry here lately, and there's a wildfire not far from here.  The stars were twinkling quite a lot.  But it’s so dark that the contrast was great, I could see all kinds of constellations, and also had a hard time seeing some of the constellations due to the vast number of stars.  It was a good first night!  Hopefully I can get my CGE Pro mount working, and get guiding to work better on the AVX.

Posted by AstronoMolly at 5:44 PM