I slept in until 11 AM, took a shower, and got lunch, and then I went back down to the lower field to offload all my images.  While my files were copying, I saw a dust cloud start to pick up on the road over by the dining hall, and then the winds started swirling and it turned into a full-on dust devil!  It moved swiftly towards where I was at, and then it turned and tore through the north end of the field, about 50 feet from where I was.  It knocked over several telescopes, including a big Dobsonian that was standing upright, and it picked up and carried one of those canopies halfway across the observing field.  I watched it teeter around before it landed, just barely missing several vehicles and telescopes, landing in a tree.  I moved frantically looked around the several big telescopes in my vicinity, trying to figure out which one to save!  I stood ready to brace myself against my 11-inch on its Celestron CGE Pro mount, since I figured it was the most breakable of all my scopes.  Fortunately, it dissipated before it could cause any more damage, although I heard another one picked up around the same time in the upper field and knocked over and damaged several scopes.  It was crazy to watch! 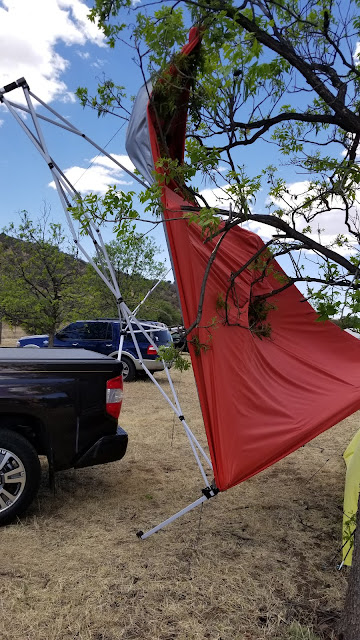 Later that afternoon, I was on the list to give a talk titled "Origin of the Elements: The Story of Stellar Nucleosynthesis."  I like to give astrophotography talks at these kinds of events, but I'm a little out of my league here at the Texas Star Party on that front, so I decided to give a more physics-y talk.  I spent quite a lot of time researching and digging into the details, and it was hard to pack all of the information I found into 20 minutes!  Every little topic could have been a whole class lecture.  As a result, I didn't actually have a chance to rehearse the talk, so it didn't go as smoothly as I would have liked.  But I got a lot of compliments afterwards, so I guess it sounded better outside my head than in!  Now I can refine it, since I'm giving the same talk to my astronomy club within the next few months.  I got some interesting questions about neutron star nucleosynthesis afterwards, which I need to go investigate some more.

Night began to fall, and the sky was nice and clear.  Jupiter is nearing opposition, making it big and bright, so I took the QHY5L-II I'm borrowing as a second guide camera, attached it to my Astronomik LRGB filters, and attached the whole thing to my 8-inch, after I found the various adapters that have now become scattered across my gear.  Since it was shortly after sunset, however, the seeing was terrible, so I haven't processed it yet to see if I got even a few good frames in the messiness.  I'll have to image it from home in the next few weeks here.  That's one nice thing about planets - they don't care about light pollution, you can image them from anywhere!

Once I finished that, I got the cameras re-attached, and began re-aligning and re-polar aligning both of my scopes.  The wind bumps them around during the day, and then my Celestron AVX mount lost power after I turned it on due to a finicky power supply connection, so I had to completely re-align that one as well.  Polar alignment is very difficult on my CGE Pro mount, so it took a while.  But I finally got them both up and running around 12:45 AM.  On the 11-inch Schmidt-Cassegrain, I collected RGB data on M104, the Sombrero Galaxy, to go with the luminance I had taken the night before.  When it got lower later, I moved over to the Iris Nebula to get a few more luminance frames and then RGB frames.  None of them really came out, however - they all look out of focus, even though I carefully focused it with a Bahtinov mask before each target, and I had re-collimated it the night before.

I had slightly more luck on the AVX mount.  I wanted to use my Nikon D5300 on my Vixen Polarie star tracker that night so I could image the Rho Ophiuchi region widefield, but I didn't want to let my Borg refractor just sit there useless either.  Then I remembered that I had also brought a SBIG ST-8300M CCD camera that I'm borrowing from a fellow club member, which I had brought to let my minion Miqaela try to use on her Newtonian telescope, since it may be able to focus when her DSLR can't (since the sensor in DSLRs is so much farther back than in CCD cameras).  I borrowed Miqaela's ZWO LRGB filters for it, and aimed it at M17, the Swan/Omega/Horseshoe/Checkmark Nebula (so many names!).  It made it so back-heavy though that I couldn't balance it in declination without a longer dovetail, so I duct taped a pair of binoculars to the end!  It still wasn't quite enough, but it was better.  As a result, guiding wasn't great in declination, so I only took 3-minute subframes.  But it came out all right anyway! 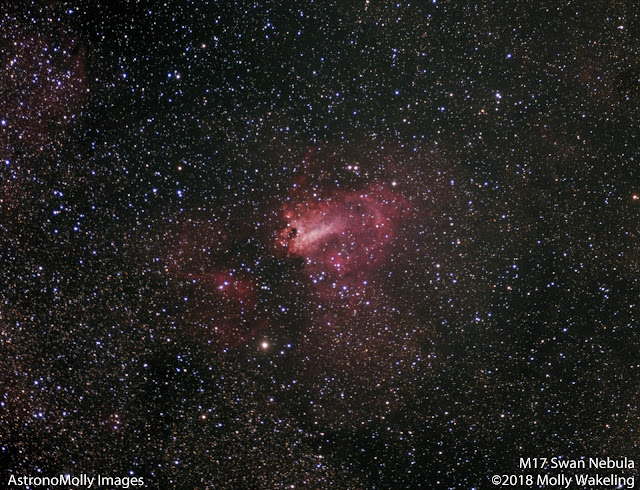 After I got those all going, I set up my Nikon D5300 on my Vixen Polarie star tracker and pointed the camera at the Rho Ophiuchi complex surrounding the star Antares, just east of the Milky Way.  It's a gorgeous, colorful region of stars, a globular cluster, and dust clouds.  I set my lens to 100mm focal length, focused, and set up 2-minute exposures.  They didn't end up being quite long enough to really capture it well, but it didn't come out too bad. 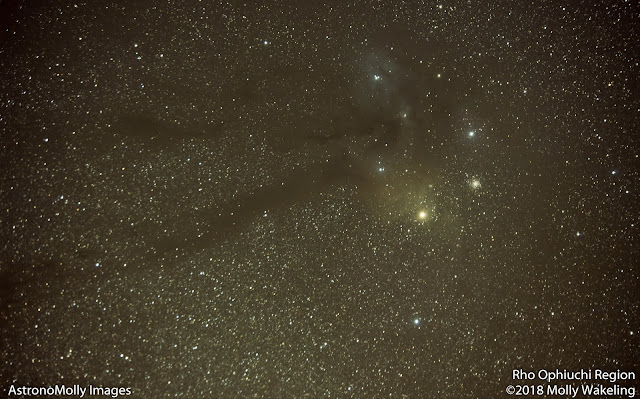 After I got a bunch of frames on that, I tried to image the Veil Nebula region, but I couldn't get long enough exposures for how much star streaking I was still getting.  I don't have the polar alignment module for the Polarie because it's expensive and awkward to use, so I can only roughly polar align it, so it doesn't always track that well.  So instead, I turned it back to the south, set the lens to 55mm, and did 3-minute exposures (shorter focal length means it takes longer to see the streaking) on a region of the Milky Way.  The subframes were gorgeous, and it came out great! 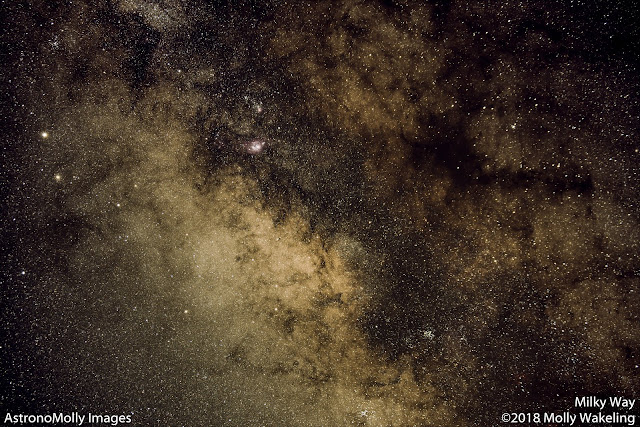 So despite my C11 not working great, I did finally get some good images last night!  Hopefully we get another good night before this party ends so I can try to get at least something out of my C11 for all the effort it takes to set up.

While imaging was going, I wrapped up the "20 Stinking Planetaries" Texas Star Party special observing list, and then got my pin the next day!  It's my first observing pin! 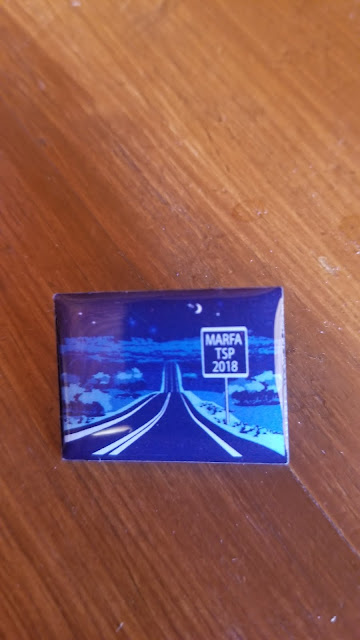 After I finished the planetaries, I put on this 2-inch eyepiece I got from another club member, a Meade 40mm, 60-degree FOV, 5-element Plossl monstrosity that weighs practically as much as the telescope.  I ran through the common objects list on my hand controller and drank in gorgeous view of the Lagoon Nebula, Trifid Nebula, Wild Duck Cluster, Whirlpool Galaxy, Sunflower Galaxy, Black Eye Galaxy, and many more.  We finally went to bed at 5 AM.  What a night!

Posted by AstronoMolly at 3:19 PM