At last year's Hidden Hollow, I wound up chatting with a lot of people about how I do astrophotography.  Some of the organizers caught wind, and when one of the speakers couldn't make it, they asked if I'd fill in with a talk, so I threw one together where I walked through the image processing process, and it went really well!  So this year, I decided to talk about lunar & planetary astrophotography, since the threshold for getting into it is a lot lower - you don't need a fancy telescope (just one with enough magnification, aka focal length, like a Schmidt-Cassegrain), or a mount that tracks particularly well, or a fancy camera (I use a $120 QHY5 guiding CCD) - see my post about lunar & planetary astrophotography here.  I talked about what kind of equipment you might want, what equipment I use, how "lucky shot" video imaging works and why you should use it, and a walkthrough on how to process RGB data in RegiStax.  It went pretty well, I think!  People appreciated how I walked through all of the steps, which usually seems to be the most mysterious part about astro-imaging that usually turns people away from wanting to try it.  The processing for planetary and lunar is also a lot less involved than deep sky, so that helps as well for people to try their hand at some kind of astro-imaging.


There were a few other talks that day, including Astro Bob King, author of “Night Sky with the Naked Eye,” which I got a free copy of courtesy of the Richland Astronomical Society for being a speaker.  All good talks!  Then I took another afternoon "nap" in my hammock.

We had the raffle prize drawing at 5:30 PM, and thanks to the tickets I bought plus the ones RAS gave me for speaking, I won an AstroZap gift certificate, a 12mm Meade astrometric eyepiece, and a beautiful, etched wooden coaster with the Hidden Hollow Star Party logo.  Woot!

Because of all the issues I was having with my mount, the Richland Astronomical Society graciously let me borrow their Celestron AVX mount and a set of RGB filters.  I was going to use by Borg on it, but then they offered to let me use their Stellarvue 115mm apochromatic triplet refractor, and how could I refuse??  So I got it all set up with no problems, and it guided like a champ! 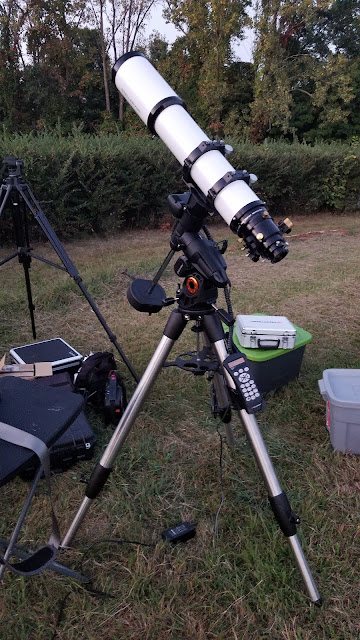 I was easily able to take 5-minute subframes consistently with no issues.  The only problem I had was that the scope didn't have enough backfocus for my L frames, which I need to take off the filter wheel for.  Not to worry though - I just daisy-chained two 1.25" extension tubes together, and that worked.  Field-expedient fix!  Wish I'd gotten a picture!  Over the course of the night, I imaged the Helix Nebula and the Orion Nebula in full LRGB, about 10 frames per filter.  While that was going, I gave the CGE Pro one last try - I attached my DSLR to the Borg to image the Sculptor Galaxy.  I was only able to get 2-minute subframes that didn't have streaking stars (I couldn't try to guide because PHD can't use the same driver in two instances of the program), so I guess that's not too bad.  However, I don't have any 2-minute dark frames, so I'll have to take some the next time it gets down to 60F at night (which is just about any night in the next few weeks).

After I got home, I processed the LRGB images, and despite my inexperience, they came out okay!  I've got a lot to learn, and I'm eventually going to re-color-balance these, but it's acceptable for now.  Once I get the workflow down a little better, I'll make a tutorial post about it. 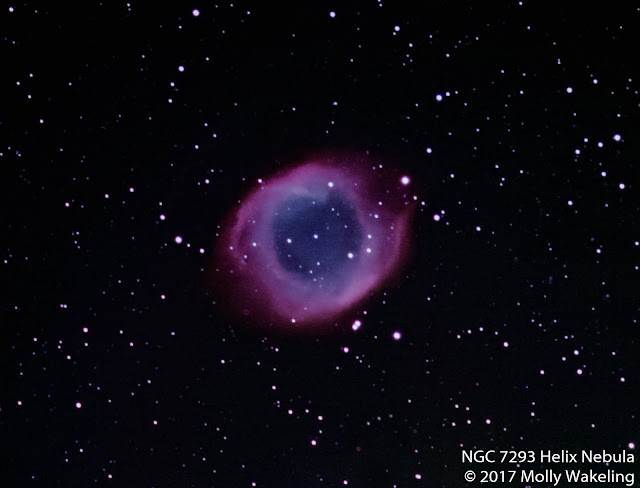 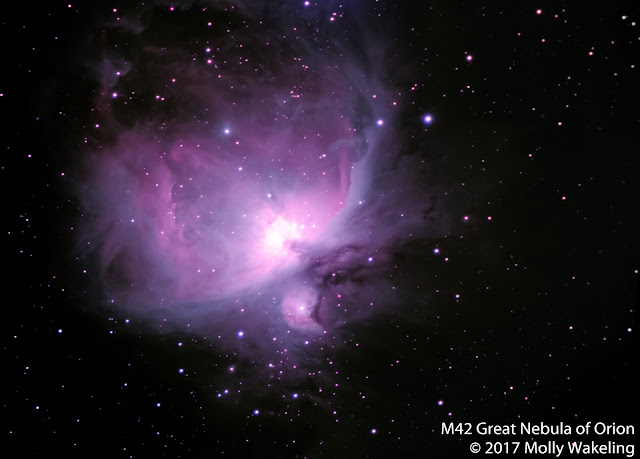 So despite the issues I had with the CGE Pro, I still managed to come home with a few prizes.  And I've still got the timelapse to make - I got several great sequences that are going to make a very nice video.  Once I get time to make it!

Hidden Hollow was a great time this year, with three (!) clear nights, great telescopes, and great company!  It's a small star party, but the people have a lot of heart - dedicated astronomers woke back up at 3 AM to work on observing lists in wintertime constellations that are starting to rise (which is a good idea, since it only got down to the upper 50's F, and it was very pleasant).  I really enjoyed giving my talk and showing people throughout the weekend how I do astrophotography, and of course I also just enjoyed being outside for a weekend.  Can't wait for next year!

Table of Contents
Posted by AstronoMolly at 8:04 PM