I haven't been out since the Hidden Hollow Star Party, and it was clear with no moon, so who cares if it was a week night??  The stars were calling...

I brought my camera bag out to the observatory to use the memorial scope, and surprise surprise, the weather was so good this week that one of the other club members, Jim, was out there in his trailer all week.  Yay company!  Of course, it's hard to enjoy company when you are having equipment issues...

I decided I wanted to play more with the CCD camera I'm borrowing (a SBIG ST-8300M for anyone keeping track), with filters this time.  But as I discovered at Hidden Hollow, while my red and green filters look fine, my blue filter is making the stars look...interesting. 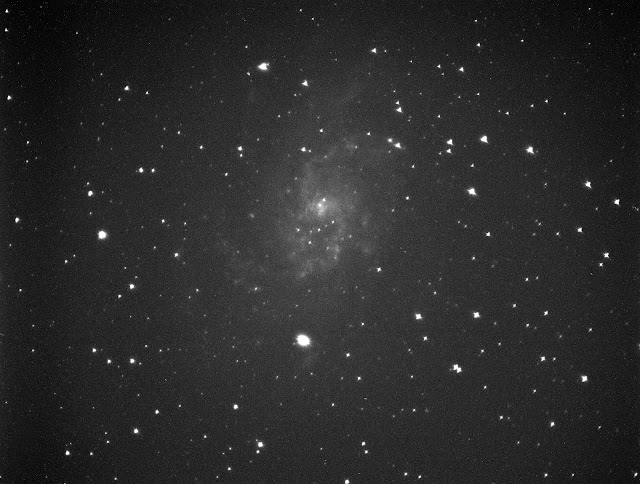 M33 with my messed-up blue filter.

This is M33, the Triangulum Galaxy (it is also confusingly referred to as the Pinwheel Galaxy, same as M101, so for clarity I'll call it the Triangulum Galaxy...so-called because it's in the constellation Triangulum) with the blue filter.  You can see how the stars have vague cross-shapes and spikes...for comparison, here's one with the red filter. 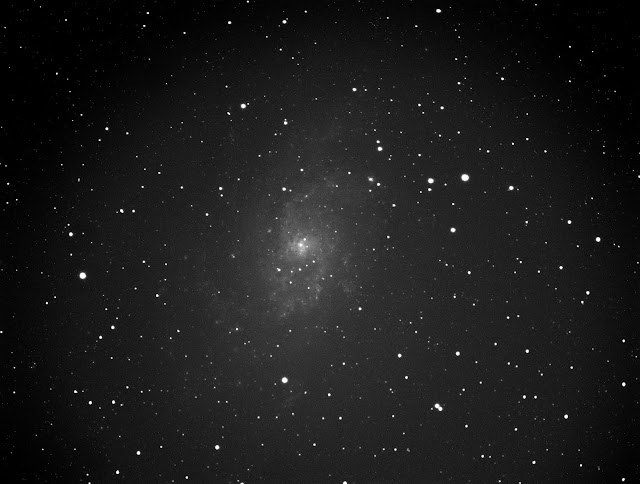 M33 with my red filter - much better

The blue filter is the one I tried to clean with a glasses cleaner moist towelette, as you may recall from my account of the Hidden Hollow Star Party, since it was pretty bad.  Maybe it left some kind of residue?  I've held it up to lights in my house and it looks fine.  I need to find my multi-coated optics cleaner, but I can't find it.

Anyway, I decided to take just red, green, and luminance data of M33 then (180-second frames, about 10 per color channel because I was short on time), but after setting up the L frames to go, I went to chat with Jim, and then came back later to discover that I had forgotten to turn the cooler back on!  As a result, the stars looked kind of soft, like they were out-of-focus.  Probably something to do with thermal expansion of the chip slightly shifting the chip out of the focal plane.  It was getting near time to go, so instead of re-taking the data, I decided just to slew to M42 instead, the Orion Nebula, since I was out late enough to see it clear the trees.  However, guiding was starting to give me issues and tracking was off too (which was breaking the guiding), so I decided it was just time to call it a night, somewhere around 12:30 AM.  I still had work the next day.  So I'll have to either figure out a way to clean the blue filter, or buy a new one, before I can make an image of M33.

Table of Contents
Posted by AstronoMolly at 5:33 PM