The Clear Sky forecast (http://www.cleardarksky.com) was looking very promising for last night, which also happened to be Members Night for the astronomy club out at the observatory.  The food theme for the potluck was Oktoberfest, and I couldn't find a German chocolate cake, so I got this double-chocolate torte thing instead (close enough right?), which was devoured by our many sweet-toothed members.  Now, the night before, I didn't get to bed until 11:30 PM, and then I had to be up before 3 AM to volunteer at a marathon.  I got home from that around 2:30 PM, and snuck in a 1.5 hour nap before loading my telescope gear into the car (the Borg 76mm refractor, new Celestron Advanced VX mount, camera bag, and the CCD camera I'm borrowing) and heading out to the observatory.  The sky was as fantastic as promised.

My goal for the evening was to add some RGB (red, green, blue) data to the luminance data I took on the Dumbbell Nebula last weekend.  I got everything set up and aligned, but then I had issues with guiding again - it worked for a while, but then it was getting really bad so I went to reset it, and then the ASCOM driver for the mount kept crashing, and finally I gave up and just took 2-minute subframes instead and binned the images 2x2.  Binning on a CCD camera essentially means that instead of every pixel recording the light and saving it out, pixels are combined to increase the amount of light gathered in those pixels.  From what I understand about CCD imaging, you want to take your luminance frames at the highest available resolution, so 1x1 binning, and then to get good color saturation, you take your RGB frames at 2x2 binning.  So I took all the data, and then this morning I got it copied over to my desktop and did some Googling on how to deal with LRGB data in DeepSkyStacker (I ended up following this video).  It is not easy.  (There are paid programs out there that do a better job).  If your L images have no rotation or movement from your RGB images, you can stack them separately from each other and then combine in another program like Photoshop, but my filter wheel only has 3 positions, so it's inevitable that my L images will not be exactly lined up with the RGB, especially since I have to go to a nearby bright star to re-focus, and then back to the target.  In addition, the filter wheel I have only has one screw with which to hold the camera on, so the camera naturally rotated and slid around a bit as the telescope moved across the sky, so not even my R, G, and B channels are lined up with each other, at least not without cropping out most of the image to delete the areas that don't overlap.  Ultimately, I wasn't able to use the L images with the RGB images, so I just used the RGB's alone in Photoshop with their lower resolution, but color balancing was hard and the image turned out pretty messy.  Well, here it is anyway: 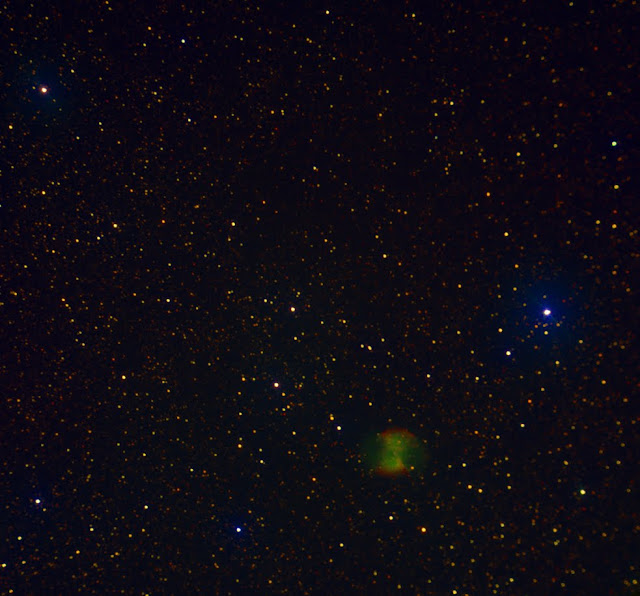 It's interesting to note here how green it came out.  I see this a lot in CCD images of the Dumbbell Nebula online.  My DSLR records much more blue than green.

After I was through with the Dumbbell Nebula, I decided I wanted to try another bright target, this time all with the same binning and exposure times in case I ran into issues with DeepSkyStacker - M31 Andromeda Galaxy.  The green and blue channels ended up being out of focus, so I wasn't able to make the full LRGB image, but the luminance channel came out great! 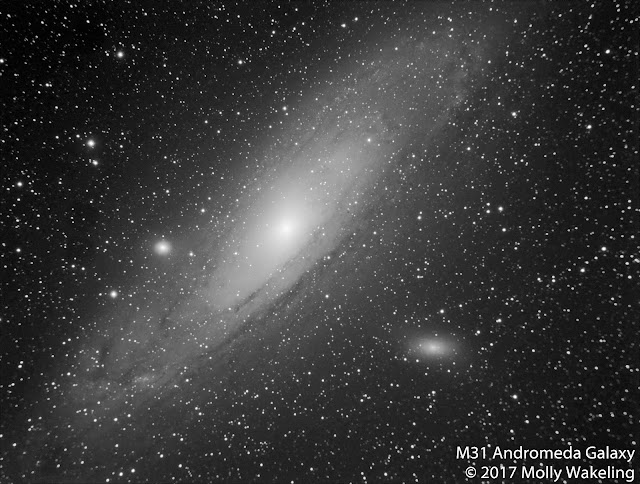 Heck yeah!  That is awesome.  I can't wait to get some color data on that.  Hopefully at the star party I'm going to this weekend...it's looking like it's going to clear up.

When I finally started packing up around 4:30 AM, Orion was getting higher in the sky.  I can't believe winter is nearly upon us already!  I was very tempted to take just a set of luminance frames before packing up, but I knew I really needed to get home and get some sleep - the nap I took in the afternoon was the only sleep I had gotten in the last 24 hours, and I do need to be at work on Monday.  So I just took a single frame, 30 seconds long, binned 1x1, and besides the higher noise level since it's just a single frame, it's gorgeous! 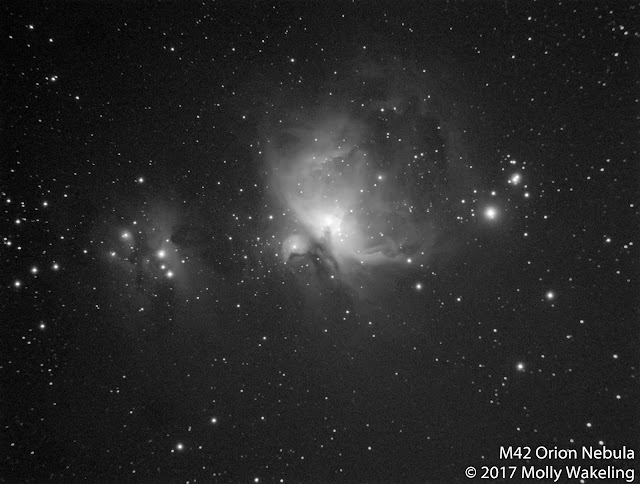 One discovery I made last night is that it's going to take some practice for me to get a feel for what the right settings will be for a given target.  Looking at the individual FITS frames can be misleading, since you need to stretch the histogram quite a bit in order to look at them, and they can look really blown out or crazy-noisy.  Here's an example of a single Andromeda frame, from the red channel: 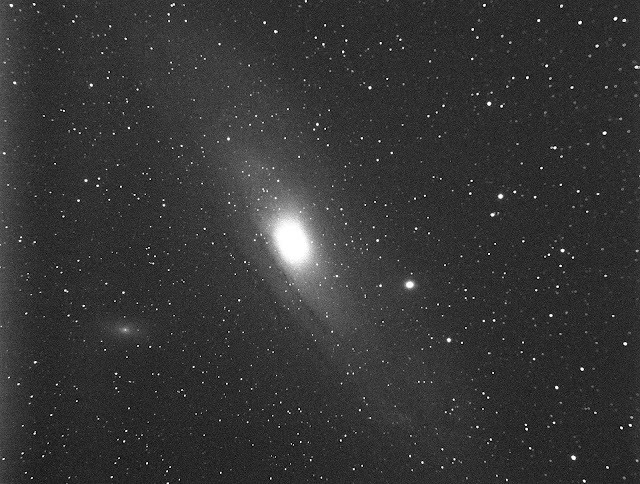 The core looks blown out, and there's a lot of noise.  But after stacking (and making some tweaks in Photoshop), it looks like this: 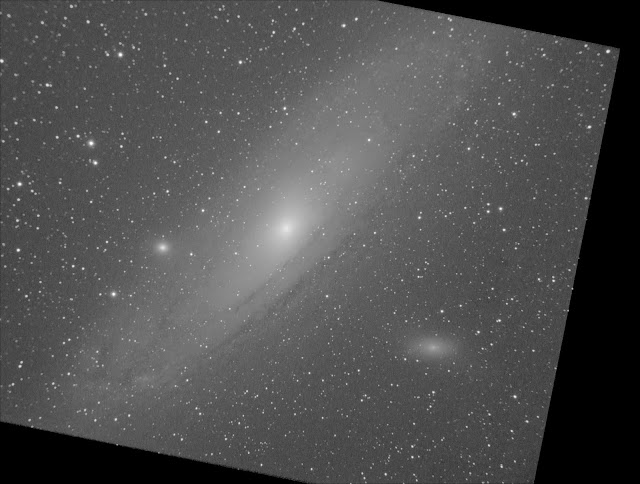 Ignore the weird rotation, the camera was sliding around inside the filter wheel, and this is aligned to the highest-scoring luminance image.

In addition to the stuff with the telescope, I also pulled out the Vixen Polarie I bought at ASTROCON, a little star tracker you can attach a DSLR to (more info on that in this blog post), and imaged the Pleaides cluster set at 100mm.  The Pleiades, also known as the Seven Sisters, is an open cluster about 444 lightyears away that is easily visible naked eye, even light fairly light-polluted locations.  It's a pretty wide-field image, but you can see some of the nebulosity associated with the cluster.  I need to take some flats for this lens. 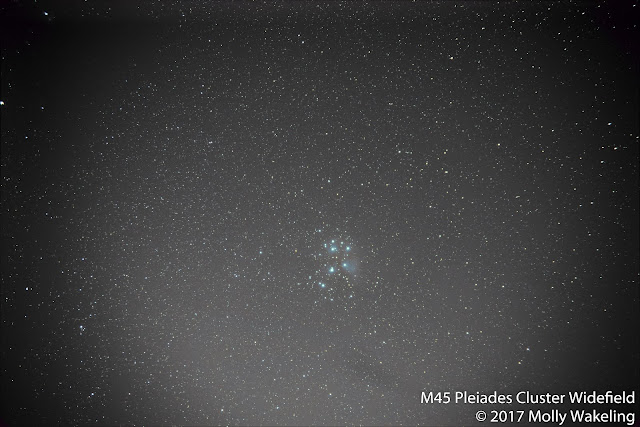 So it was a very long, sleep-deprived 26-hour run yesterday, but I made it safely back to my house, and learned a lot!  I actually felt quite awake all night.  Astrophotography is better than coffee for waking me up.

Posted by AstronoMolly at 3:44 PM