When it's a weekend night and the moon is too bright to do deep-sky imaging, don't despair - that's the perfect time to image planets and the moon!

So I set up my 8-inch SCT in the front yard of my apartment, and after aligning slewed to Saturn first, since it would soon disappear behind the roof of my building.  My NexStar SE mount was tracking better than it has been - sometimes, when I'm looking at a highly magnified image, it drifts off rather quickly (even after picking up the backlash).  The backlash is unreal on that mount though!  I would turn on anti-backlash, but then it makes the image jump, which is difficult when you're trying to center a planet in a highly-magnified view.  Getting my QHY5 monochrome CCD focused didn't take long, but I only managed to get a luminance and half a red video before it slipped behind the roof of the apartment.  Oh well, next time.  And the luminance video turned out to be a little bright. 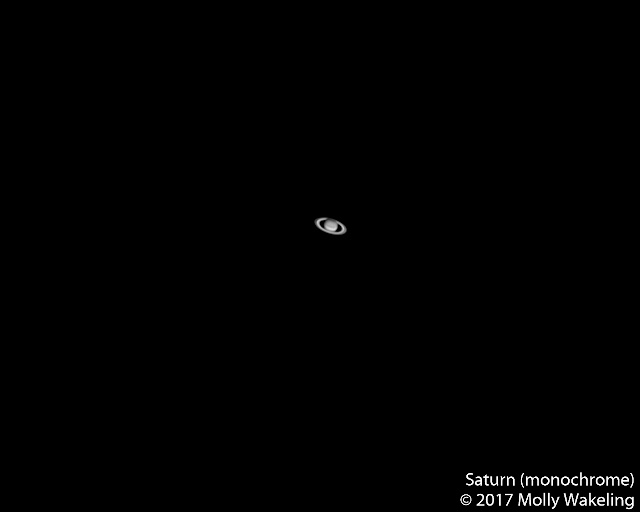 Next, I slewed over to the moon, which was nearly full, so I went to the shadowy edge to try and image some craters partway in shadow.  I found some interesting spots and took a few 1000-frame videos, and then I attached the camera to a Barlow.  Without the Barlow, the tiny CCD chip in the QHY5 paired with my 8-inch gives me a 11.4x9 arcmin field-of-view (FOV).  But with the Barlow, it's even tinier - 5.4x4.2 arcmin.  However, the seeing around here rarely supports that kind of magnification, and even with "lucky shot" processing like what RegiStax does, it's hard to get nice sharp images.  But I think they turned out pretty nicely anyway. 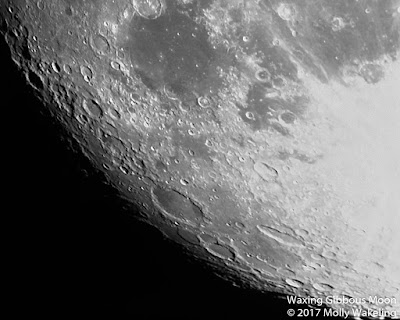 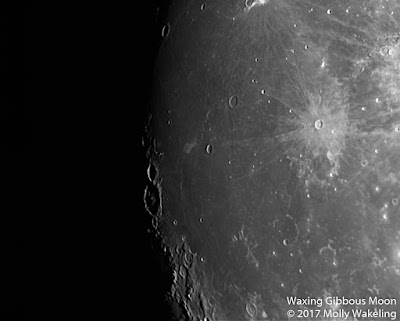 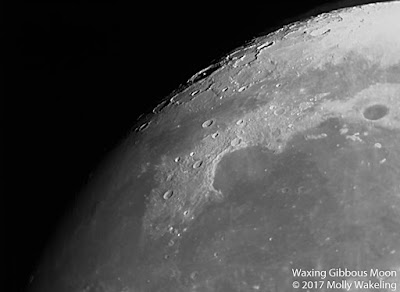 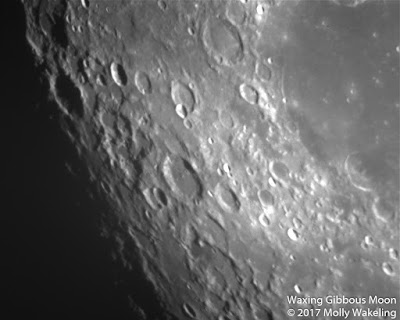 The nearly-full moon is so bright that I had to use my ND (neutral density) filter to get it dim enough to not saturate my camera at its lowest settings.

In addition to that imaging, I am borrowing/testing out a SBIG ST-8300 monochrome from one of the club members.  I was hoping to do some deep-sky imaging with it last weekend, but alas, I came down with a cold within hours of returning home from the solar eclipse in Casper, WY.  So it will have to wait another week or two.  I tried imaging the moon with it, but it is too sensitive - even with the ND filter, it was way oversaturating.  Oh well, can't wait to try it on a DSO!

Table of Contents
Posted by AstronoMolly at 1:33 PM