It was hot out, so I went to the education building to look through the data I had and see if there was anything usable from last night.  I ended up mostly chatting with people though.  I did have some usable short-exposure data on the Orion Nebula though, I think, well, except for the blue filter, which I discovered the next morning was very dirty.  I also didn’t have 30-second dark frames, and it was too hot to take them right then - I couldn't get the chip in the CCD camera to cool down enough (it can cool to 35C below ambient, but it was hot!).  Fellow club member Jim later on helped look at the scope with me, and we tightened up one screw a little, but I can jiggle the telescope back and forth by hand – it’s kind of loose.  But if it were just that, I wouldn’t be seeing all of that error, since the scope is going to be pulled by gravity on one direction.  It sounds like it might be a tough fix. It’s kind of frustrating because this thing was just refurbished!  I’m going to email Dr. Clay and see what he thinks - he's the one who helped me try to fix my CGE mount, and who sold me the CGE Pro.  That mount was just recently refurbished, and it's been Hyper-Tuned, so it should really not be doing this.  It's disheartening that I'm having mount issues again after all of the pain I went through with the CGE less than a year ago!

To make up for the lack of sleep on Thursday night, I set up my hammock and took an afternoon cat nap.  I rarely actually fall asleep when I "nap" (and if I do, I wake up feeling sick), but just lying there letting my mind wander is nearly as relaxing. 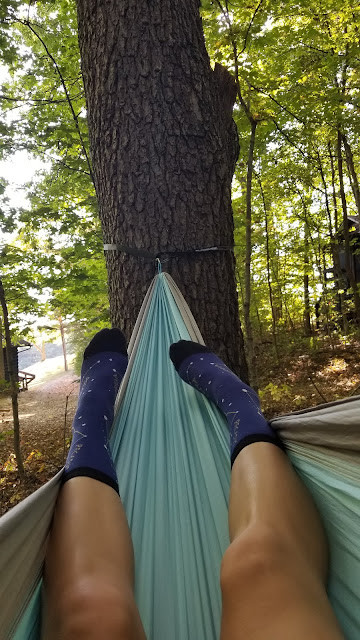 The food truck was around for dinner, and then sunset came and went.  The thin crescent moon was hanging just above the trees in the west, so I finally got a little bit of useful data!  I threw my QHY5 CCD onto the 11-inch and took a few minutes of video.  I also put the RGB filters on and grabbed Saturn data.  (I got a glasses cleaning cloth and wiped down the blue filter, and the red one too while I was at it).  I spent another several hours that night trying different things to get the mount to guide long enough to image something, but no dice.  Finally I gave up and just attached the SBIG to the Borg refractor, which I was using as a guidescope, and then I attached my 50mm Orion guidescope to the Borg to guide it.  I did as little as 30 seconds, but my stars had these weird cross-shaped patterns to them.  I thought it was the dec axis again, but then I tried just luminance and no filters, and the stars looked fine.  So in addition to the mount issues, now I also messed up the filters! I did collect some blue data, and several good green frames since that filter seemed fine, but that was about it. So I gave up on that, and just attached my Nikon D5300 to my Vixen Polarie, set my 50-200mm lens at 100mm, and imaged the lower half of the Orion constellation.  Well, when I was packing up at around 3:30 AM, I realized that I had forgotten to put the camera back into raw mode after shooting timelapse images in jpeg.  Sigh…another whole night lost!  I went to bed around 4 AM though, since my talk in the morning on lunar and planetary astrophotography was at 10:45 AM.

Well, it wasn't quite lost - my Saturn data wasn't that great, and neither was the lunar data (the seeing wasn't very good), but I went back into the data I took last weekend on my Borg scope out at the observatory and saw that I had some luminance and red frames.  Combined with the images I took this night, I had enough data to stack!  I am discovering that processing LRGB monochrome data is difficult and requires a lot more work and tweaking than my DSLR data does, but it's a whole new world to explore! (And thank goodness for YouTube tutorials!) 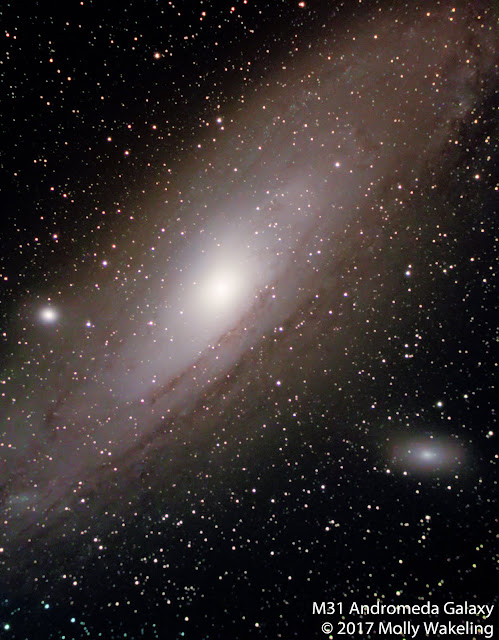 Well, actually, one of the lunar ones came out okay (I was processing those while I was writing this). 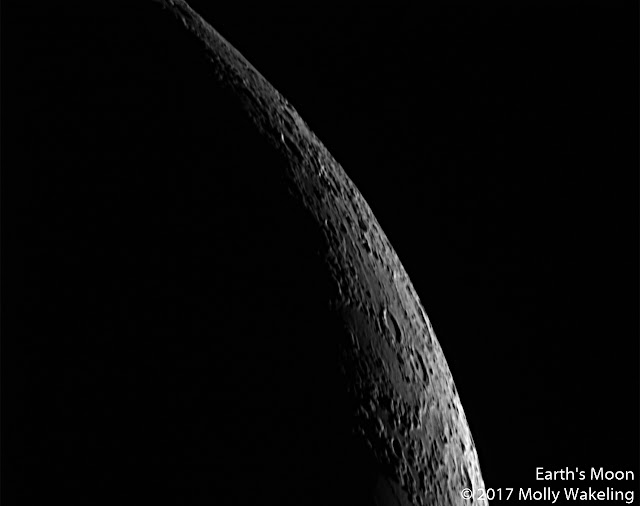 So the night wasn't a total loss, but it sure felt like it.  It's hard when the skies are clear to have non-functioning equipment!  On the other hand, I did get to enjoy lots of fantastic visual views through people's big juicy Dobsonian telescopes.  It's not particularly dark out at Hidden Hollow, but lots of things really pop with the right filter in a Dob.  Globular clusters are one of my favorite things to look at in a Dob, and I also saw the Swan Nebula, Veil Nebula, and a fabulous view of the Orion Nebula, with lots of detail that I normally only see in my images!  One of the interesting things about the Orion Nebula is that the red is so apparent in images, but you never see it visually, except maybe under exceptionally dark skies with a gigantic fast reflector.  It always appears this greenish-blue.  I might color my images of it like that sometime to represent the visual view better.

I did also take a few looks through "Big Blue," the 36-inch reflector at the Warren Rupp Observatory out at Hidden Hollow. 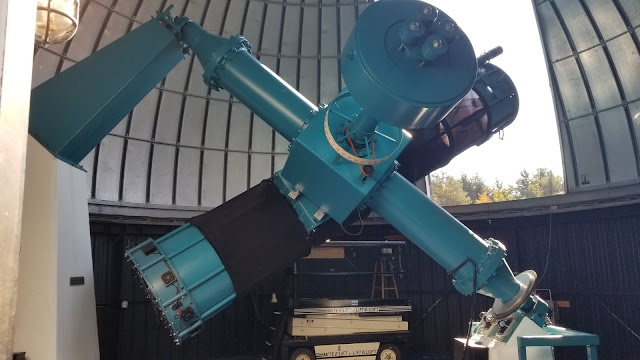 It's so tall, you have to take a scissor lift to get to the eyepiece!  Globular clusters resolve quite clearly into hundreds of stars, and I could see the football shape easily in the Dumbbell Nebula.  They pulled up Stephan's Quintet as well, but I could still only guess at dim fuzzy things.  NGC 7331 near the Quintet looked very nice though.

Table of Contents
Posted by AstronoMolly at 7:44 PM