I went back out again last night to practice some more with the SBIG ST-8300M, the monochrome CCD camera I'm borrowing.  Since I had work the next morning and the moon would be coming up before midnight, I didn't have enough time to try imaging with RGB (red, green, blue) filters, so I imaged just luminenance frames again.  Also, rather than setting up my own scope, I utilized the astronomy club's 5-inch refractor imaging rig inside a dome. 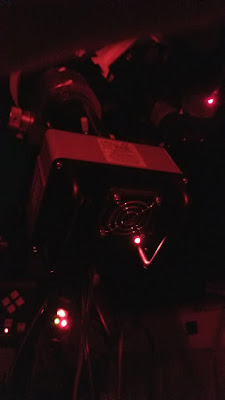 I was going to image M16 Eagle Nebula, but all day there was a barely-discernible haze, and once night fell, I couldn't even find Sagittarius.  Higher altitudes were much clearer though, so I decided to image IC 1396, the Elephant Trunk Nebula.  I started with a 3-minute subframe for centering, but I couldn't quite see the dark molecular cloud for which the nebula is made, so I took a 5-minute image, and then there it was!  I could juuust make it out.  (I've gotten pretty good at this, even on my dim, reddened tablet screen.) 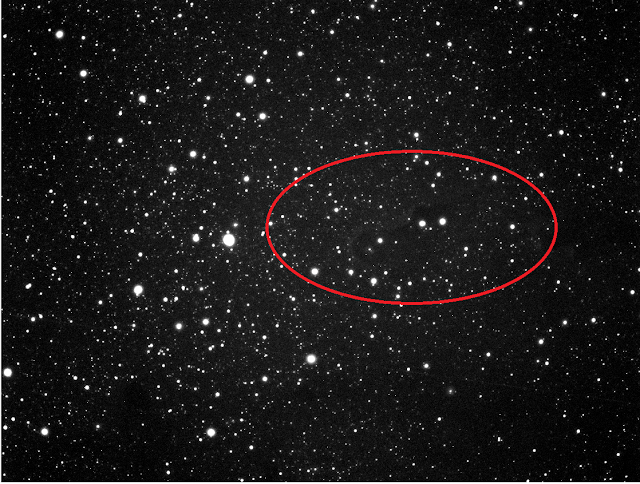 I used the Focus routine in CCDOps to center it (in the frame I grabbed in CCDOps, it was over to the right), getting an updated frame about every 3 seconds or so as I watched that bright star to the left move leftward.  When I figured it was close enough, I started up Sequence Generator Pro, cooled the chip to -20C, and fired away with 12x5-minute exposures.

Since I'm just borrowing this camera, I don't have a darks library built up yet, so when I got home, I set it out on the back porch, had to cool to -20C, and set a series of exposures from 2 minutes to 6 minutes, 20 darks each.  It got down to -20C initially, but it must have been warmer on my porch than I thought, since the temperature listed in all of the dark frames I took was -15C instead (the chip can only go to -35C below ambient temperature).  One nice thing about FITS files, which looks like is the only file type SGP will save out for SBIG cameras, is that they have a lot of nice header data attached to them.  The downside is you need a special program to open them (I downloaded AvisFV), and you can't scroll through them, but have to open one at a time.  Also, I didn't have time to collect flats before it got dark, so I'll have to go out again later, and then re-process.  Despite the temperature difference in the darks, and the lack of flats, I stacked them anyway. 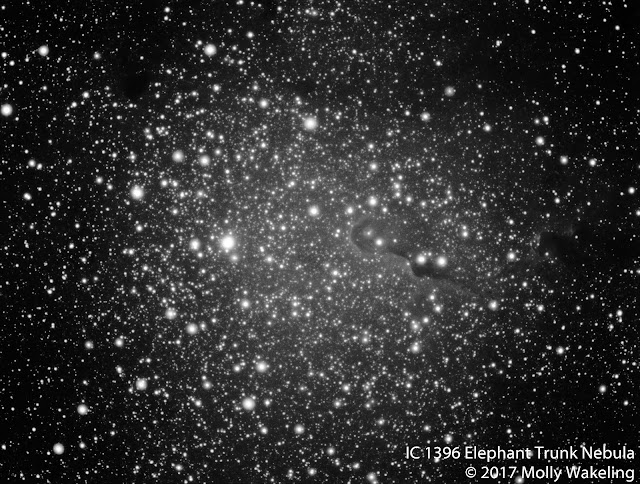 Can you see it now??
I think if I get some good flats, and the correct temperature of darks, maybe I can get some more out of this image.  The rest of the low contrast is likely due to the crummy atmosphere.  But it's still east of the meridian in the first half of the evening, so I've got time!

On my next time out with it, I'll use some RGB filters on something and get color!