A Super-Duper Primer of Astrophotography Part 10 - It Only Takes a Camera!

I suppose I should have made this one of the first posts in this series, but here it is anyway.

Plugging a camera into a telescope and getting those awesome pictures of galaxies and nebulae is fun.  But you don’t even need a telescope to get started – a DSLR and a tripod is all you need.  There is a lot you can do with just a little equipment.

Wide-Field Imaging
You can get some very nice pictures of the Milky Way with the stock lens and a tripod.  This is one I captured from outside Albuquerque, NM, on the side of the highway with a 6-inch travel tripod I threw in my carry-on backpack. 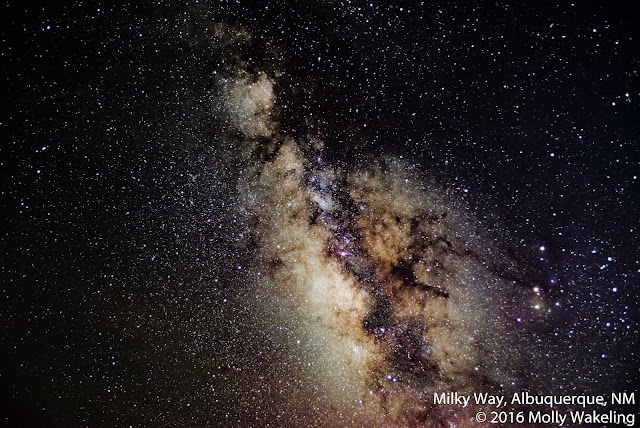 I utilized stacking here like how I do for my deep sky astroimages, using DeepSkyStacker.  Because it has a registration algorithm, there was no need to track the Milky Way.  I used a 18-55 mm lens at 18 mm.  The shorter the focal length, the less star movement you are going to have over a given period of time.  Shooting at f/3.5 with the focal length at 18mm, I can take single frames as long as 13 seconds facing southward before I start getting star trails.  I set the ISO at 3200 – ISO 6400 is too noisy for my taste, even though you will get more light.  But stacking will get you all the light, color, and detail you could want.  The above photo is 19x15s frames stacked.  I forgot to take darks, so you can see the red banding at the bottom still.  Especially from a dark site, you can get some incredible images of the Milky Way this way.  I highly recommend using a remote shutter or an intervalometer (or if your cameras has a built-in interval timer) to trigger your images so that you touching the camera doesn’t jitter the camera in the first second of the image.

There are plenty of other areas of the sky you can image this way – constellations can make for some very nice images as well.  Here is one of Orion I took this past winter.  I turned the tripod westward periodically so keep it in my sights for a longer period of time, and in DSS, you can turn on “mosaic” mode, which will stitch together all of your images in addition to stacking them.  It came out pretty neat, and you can see the Great Nebula of Orion, the Flame Nebula, and even the Horsehead Nebula if you look carefully.

I have tried shooting shorter images at longer focal lengths without much success – even after stacking, they still turn out pretty dark.  Feel free to give it a try though, especially if you have a fast (low f-ratio) lens!  This is one of the few that came out decently.

Also, make sure you take these in RAW format so that stacking and post-processing go more smoothly.

Star Trails
Star trail images are actually super easy to do (although they are time-consuming to capture).  They often look like the photographer left the shutter open for hours, but this isn’t the case – if you did that, it wouldn’t be long before you completely saturate your camera chip with background light.  Instead, you take a number of shorter exposures and use software to stitch them together.  You don’t have to be in a dark area for it either, since stars are pretty bright point sources.  Choose an ISO where you are not getting too much background light pollution (maybe 800 or so – I’ve also done 1600).  Use your shortest focal length.  You can take these in JPG rather than raw.   Make sure you have your focus on manual – your camera won’t be able to auto-focus at night.  Also make sure you set your white balance on something besides Auto (I usually use Daylight), and turn off any other auto settings.  Then set your shutter speed for 30 seconds, and run your camera either on its interval timer, and intervalometer, or off a computer using something like digiCamControl or BackyardNikon/ BackyardEOS.  Take them with as short of a pause in between frames as you can.  Let it run for a few hours, probably an hour at a minimum.  After that, I use a free app conveniently called Star Trails to process them.  Basically, it adds the portion of the image with stars in it together and creates a composite image of all of your subframes, and you get those beautiful arcs.  Facing north tends to be the most interesting, since you can see the stars circling around Polaris, and you can eve see Polaris itself move, since it is not exactly above Earth’s axis of rotation, only close to it.  But you will definitely see movement in any part of the sky.  Think about your foreground when composing your image as well – having something interesting in the foreground is just as eye-catching at the star trails themselves.  After Star Trails, I’ll usually take it into Photoshop to mess with it a bit more.  Also, Star Trails has the ability to subtract out dark frames, although I haven’t tried this yet.

Open the Star Trails app, then click the Open button (picture of the folder).  Select all of your subframes.  Click Open. 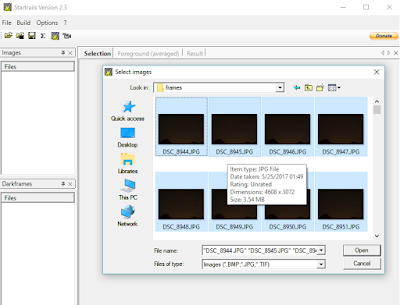 Now the next step is super hard!  Just click the "Star Trails" button :D (It's the one next to the sigma symbol in the top toolbar).  It will give you a few options. 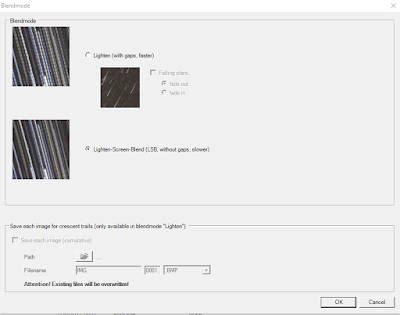 I usually choose the "Lighten-Screen-Blend" option.  The "falling stars" one is really cool too.  Then click OK.  Now just sit back, relax, and let it go!  At the end, you'll get your very nice star trail image.  Save it out, and maybe play with the color and contrast a bit in Photoshop or GIMP if you feel so inclined.

So, how exactly do you focus on the stars when the camera can’t autofocus, and they’re too small and dim at short focal lengths for your camera to see in Live View?  I have two techniques.

Use Live View on a distant light, or sometimes Jupiter/Venus.

My Nikon D5300 will auto-adjust Live View to pick up dim objects, changing the shutter speed to as long as about half a second or so.  I’ll turn the camera toward a distant light source, like a street light or house security light or something, and then zoom in on it a ton in Live View.  Sometimes, bright objects like Jupiter, Venus, or even Vega and Sirius will show up in the Live View.  When I’ll rotate the focuser to get it to be as small as possible.  Be very careful when you move the camera after that, as those focusers can slide back pretty easily.  Some photographers have figured out ways to tape their focuser down.  I haven’t done that because I’m sure that applying the tape will move it just a tiny bit, but feel free to give it a try.

If there isn’t a light source or a bright object, I’ll guess at the focus, take a 5-second exposure, and then zoom in a bunch on some of the stars.  When they look pixelated, that is when you are in focus.  DSLR focusers have infinity set at not quite all the way in – this is so that the autofocus doesn’t slam into the stopping point every time.  So bring it all the way in, and then slide back out just a bit to start with, and then adjust from there.  If you see little donut rings, you are farther from focus, and if you see resolved dots but not pixilation, then you are close.  This method takes longer, but your stars will be perfectly in focus.

When it comes to astrophotography, you are only limited by your imagination!  While my telescope rig is busy snapping away, I’ll usually run around with my other DSLR and take all kinds of images – Milky Way, star trails, Iridium flares, ISS passes, meteor showers, whatever is happening that night.  I especially love doing timelapse, particularly when looking out over an observing field full of people or with my telescope moving in the foreground.  Timelapses are especially great when there are clouds.  I’ll have a future post dedicated to that.

It really only takes a camera, a tripod, and some imagination to get started taking great astrophotos!


Next in this series: A Super-Duper Primer of Astrophotography Part 11 - Timelapse Photography

Posted by AstronoMolly at 3:33 PM