I started out with my C8 at the parking lot for that weekend’s Camper Stargaze, and I mostly had it on Mars and Saturn.  I got to show them to a lot of kids, which was awesome.  I figured out that the easiest way to get them to the eyepiece is to simply rotate the star diagonal downward, since I don’t have a step stool yet.  This seemed to work well, besides the shortest of kids.  It was decently dark that night; in fact, it eventually got dark enough that I could finally make out the Milky Way, first time this summer.  I also discovered that 1-star alignment on the NexStar mount really isn’t bad – it got me within a degree or two of the object I had it slew to.  Pretty impressive.  I did the one-star alignment because earlier in the evening, Jupiter was bright enough to see in twilight, but I wanted the telescope to track with it so I wouldn’t have to keep adjusting it, and luckily Arcturus is also very bright and was visible not long after Jupiter was.  And even with just the one-star alignment, tracking was quite good – a given planet stayed in the eyepiece for longer than at least 20 minutes, even at medium power.
At around 11 PM, I packed up the C8 and moved over the observatory, where I already had the C11 set up but not aligned.  So I got it aligned, but then it was just slightly too far off from north for me to polar align it.  So I nudged the tripod a bit – I was adjusting the mount anyway, right? – and the rest of the alignment procedure still went pretty smoothly.  So I finally started imaging the Trifid Nebula, which I’ve been dying to image!  However, it was coming out much dimmer than it had from the single shot I took on my C8 on Friday night.  I should have known – dew built up severely on the corrector plate while I was aligning. But I didn’t check until after I’d already gotten a bunch of images on the Trifid, and some on the Lagoon Nebula.  I cranked up the temperature on the dew heater, and one of the club members who was hanging out went inside and got a blow dryer, which cleared it up fast.  But it wasn’t long before it came back – my dew heater just couldn’t keep up.  I need to figure out how to get the dew shield to attach more tightly.  But I got a decent set on the Lagoon Nebula, and then also grabbed about 45 on M13 as a consolation prize.  Trifid will just have to wait until this weekend… 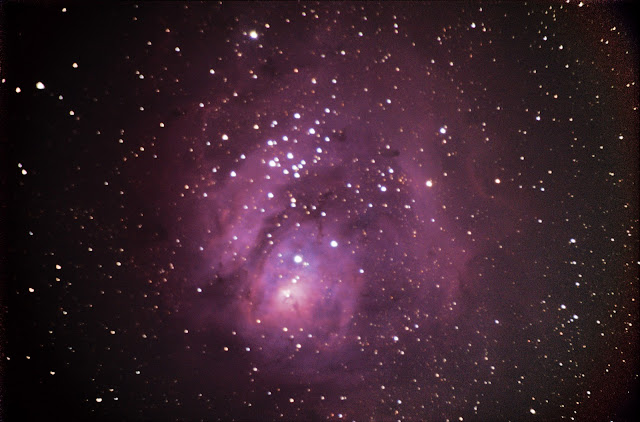 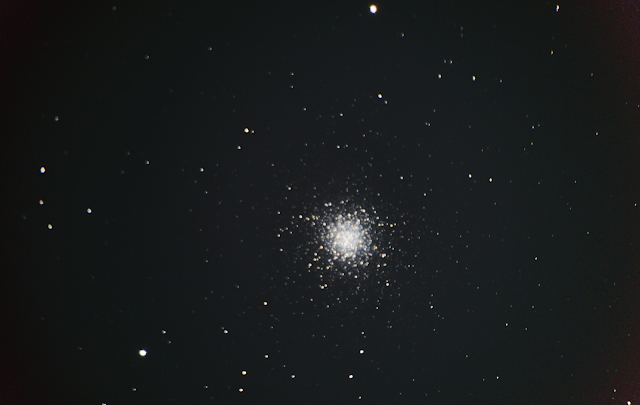 
Also, my friend Anton bought me a year subscription to Photoshop and Lightroom.  So I’m learning how to use Photoshop at the moment.  I turned up the red on this Lagoon Nebula image, since my camera has an IR filter which blocks some of the red.

The oddly-shaped stars are mainly due to the dew, but also a bit due to not-perfect collimation.  This weekend, since I’ll stay set up and aligned the whole time, I’ll take my time collimating at twilight so I can have good collimation when it gets dark.

Speaking of this weekend, I have some new toys to try out!  So fellow club member Will is letting me try out his Orion ST-80 as a guide scope, which has a 400mm focal length.  He’s also letting me try his Meade DSI IIc as a guide CCD.  I’ve been scrambling the past week to get all the parts I need to attach it to my telescope, but the final things are arriving tomorrow and Thursday – the dovetail clamps I got on ADM only came in a set of one, so I ordered a second one, and one of the rings Will gave me is cross-threaded in the hole where it attaches to the clamp, so I ordered another set on Amazon for only $20 (they have nylon screws – later, I can get a set of replacement metal ones with rubber tips for only $30 on ADM if I’m having trouble with flexure).  I got the dovetail bar attached to my telescope tube, so that’s all done at least.  I’m hoping either I have enough room left on the counterweight bar to balance it, or that the club will have a spare counterweight I can borrow until Uncle Chris finds his second counterweight and sends it to me.  This set up provides a number of interesting possibilities to experiment with over this long 4th of July weekend.  First of all, of course, guiding – probably due to light pollution I’ll be limited to less than 5 minutes, but that’s still better than 30s and will allow me to get finer details.  (I also bought an intervalometer for my DSLR, since Nikon hasn’t released the SDK for the D3xxx series so no one can write software to control Live View or bulb mode).  I can also attach my DSLR to the ST-80 and do wide-field imaging on that.  I can also take off the guide scope and use one of the clamps as a piggyback attachment for my DSLR for super-wide-field tracked imaging, since it uses the same standard 1/4-20 connection.  Also, Miqaela is bringing her Borg apochromatic refractor from Randy, so I can attach that using the rings for the ST-80 and we can image on that, since that won’t have the chromatic aberration that the Orion will.  So, lots of stuff to do this weekend!  The weather is looking hit-and-miss, but not terrible, at least – partly cloudy and mostly clear nights all four nights, and little chance of rain the whole weekend.  I did also buy a thermal and waterproof cover on Amazon for the telescope, and I hope it fits.  At the worst, I can take off the counterweight and it’ll fit.

Can’t wait for the long weekend!

Posted by AstronoMolly at 1:39 PM