The C11 was malfunctioning pretty terribly.  I put the guide scope on it, borrowed a 7 lb counterweight from Bob, and got it all balanced, and then got started aligning.  Its initial guesses were terrible, but I aligned it anyway, and then went through polar alignment, which was waaaay off.  So I tried it again, same result.  So then I took off the guide scope and kept trying, but it would just keep slewing past where the star was in declination during alignment, and I could hear the motors running at higher pitch than normal during some parts of the slew.  Around 2:30 AM, I finally gave up and plugged my camera into Bob’s C14.  I originally had the focal reducer attached as well, but I noticed that stars not near the center were really skewed – this was because his is the EdgeHD, which is already field-flattened, so the focal reducer (which is also a field flattener) un-flattened it.  It took a while to find the objects because his finderscope wasn’t aligned very well, but we eventually found the Trifid Nebula!  I took about 90 images on it, since the focal ratio is f/11 on his scope, so objects would be dimmer.  Despite the especially small FOV, it came out quite well, especially after some Photoshop! 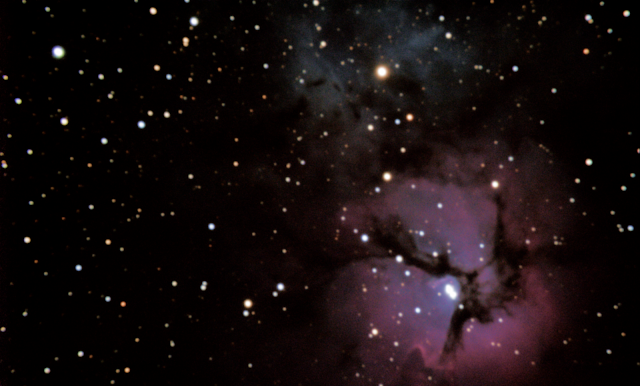 Still a little out-of-focus, but I think I’m eventually just going to have to get an auto-focuser because the critical focus is to tight on SCTs that it’s nearly impossible to achieve perfectly visually.  This is 65x30s at ISO-3200.  I unfortunately had to use super-pixel and 2x drizzle in order to get them to stack because of the un-focusedness of the stars.  But stack it did.  I also grabbed some images of M13, the globular cluster, but I haven’t copied it over to my computer yet.  We went to sleep in our tents at around 4:30 AM.

Posted by AstronoMolly at 1:48 PM