This is the first time I just left my telescope up for the next night, and it was awesome!  I waited till it got darkish, then turned it on, and it was already all aligned and ready to go.  I started imaging at 10:30, once it was dark enough.  It was fantastic.


I have a minion now – Miqaela hung out with me at our club's annual symposium and came to the star party that night, since her parents weren’t able to drive her out there.  She’s really interested in learning how to do astrophotography.  Club member Randy gave her a small Borg apochromatic refractor that he says is good for photography (once we figure out how to attach a camera to it and she gets it attached to her NexStar 130 SLT computerized mount), so we put that on her binocular tripod and looked at the moon so she could figure out how to focus it.  She brought a neighbor’s quasi-DSLR, a Canon hybrid that has manual mode but not a removable lens.  I told her the removable lens was key so that she could plug it into her telescope.  She doesn’t want to spend more than like $150 on one, so I’m going to have to convince her that that’s not going to work.  Once the sun was down and it was dark, I had her slew my telescope to Jupiter after showing her how to plug it in, and she took some single frames of Jupiter.  It was too bright for just the Barlow, so I had her take some wide field shots instead, and then I put on the eyepiece projector.  She took single shots of Jupiter and Mars.  I took a Saturn video with the 25mm eyepiece in the projection tube, which turned out decently well for the 11-inch, which I always have trouble focusing on planets. 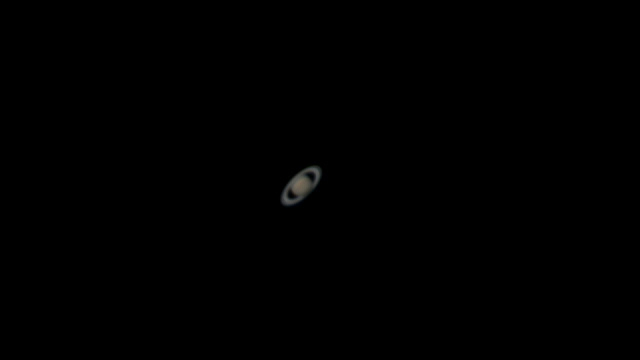 Saturn, Nikon D3100 on my C11
Eyepiece projection with a 25 mm eyepiece
Unknown number of frames from a 4m13s video

After the planets, I had her slew to the Ring Nebula, and we did 20x30s images on that, and I showed her how to focus the telescope on a nearby star.  It’s her favorite nebula, and it looks especially bright in the camera.  Even the subs are perfectly good images on their own.  I just did that one recently, so I didn’t stack it again today, but she’s coming over for dinner tonight (Monday) so I can show her how to stack.  I’ll teach her DSS first, and then how to stack video frames later, since the software takes slightly more setup (a special h.264 codec is needed in addition to RegiStax, and I have to find the tutorial for how to do that again).
After Miqaela left at around 11:15, I slewed to M51, the Whirlpool Galaxy, to image.  While the sky was quite clear, there was a lot of skyglow, and the moon was pretty bright, so I needed a bright object.  I got about 20 images in, and then Bob said he got his new guide scope working with a borrowed guiding CCD.  I asked if I could try a long-exposure image on it, and he said sure.  He currently had M92 in the view, a globular cluster, so I decided just to do that.  I ran into a few problems – first, I had to focus my camera, and Vega turned out to be too bright to focus on in his huge 14-inch SCT and was blooming, so my first 2-minute image was out of focus.  So we tried again using the Bahtinov mask, and I still wasn’t quite there, but close.  Then we also had trouble getting it into the small view of my camera’s viewfinder.  It took a while to track down, but we got it.  I also did a 5-minute image, but my camera mysteriously closed and re-opened the shutter and random intervals throughout, so I only got a 120-second image as the longest.  I’m not sure what was up with that. 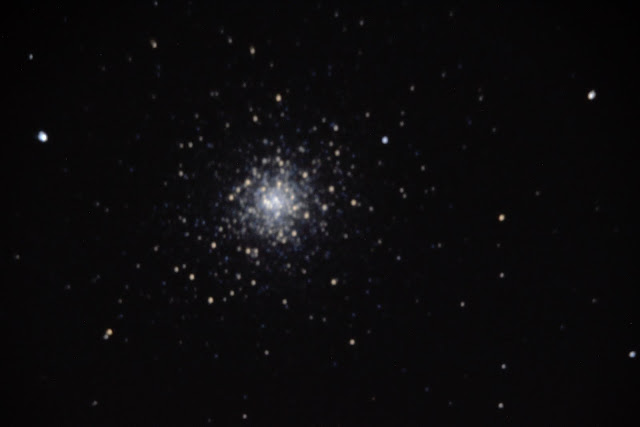 M92 globular cluster, Nikon D3100 on a borrowed 14-inch SCT, Edge HD
Single frame, 120s, ISO-1600
He showed me how the guiding works and how easy it is to set up – using a program called PHD (Push Here, Dummy) – and told me about how you either do PEC (periodic error correction, maps the imperfections in the gears and counteracts them) or guiding but not both, and other stuff.  I think I’m ready to buy one!  Can’t wait!  I also got a suggestion as to why my stars might be perpetually skewed even though collimation is good – flex in the camera attachment to the telescope.  Bob said I should look into a threaded adapter that attaches the t-ring on my camera directly to the telescope, rather than through an eyepiece barrel like the t-adapter I currently have, that’s held on my friction screws.  So lots of things to try out.
After testing guiding on Bob’s telescope, I plugged the camera back into my scope, and took another thirty images of M51 before deciding I really ought to pack up and go home.  Which was unfortunate, since the sky was very clear, and would get nice and dark once the moon set at 2 AM.  But alas, duty calls.  So while Bob and the other person camped out, I went home.  I processed Saturn and M51 this morning.  M51 turned out great, and it’s even better than that first awesome one I got!  Having better flats helps. 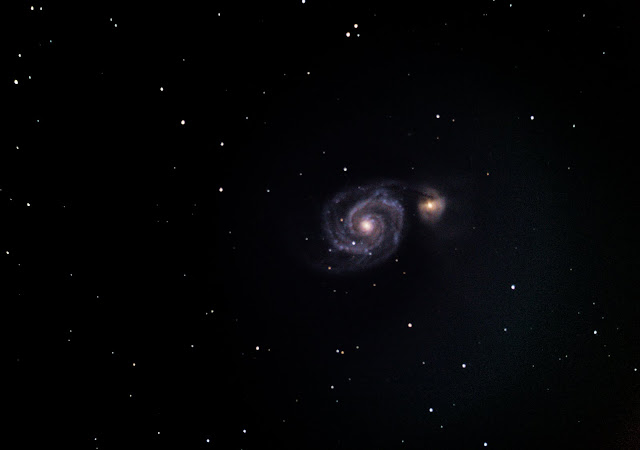 M51 Whirlpool Galaxy, Nikon D3100 on my C11, f/6.3 focal reducer
39x30s, ISO-3200
Colors came out great, and the flats were almost even (the still-wrong corrections are more apparent in less-well-edited images).  Stars were rather point-like, drift was minimal.  Fun times!

Posted by AstronoMolly at 10:29 AM