I brought my C8 along to another outreach event at a county park, since it’s much easier to set up and better for planets.  The moon didn’t come up above the trees until after midnight, so we had some dark-enough skies to look at not only Mars, Saturn, and Jupiter, but also M51, M13, M82, and a few other things.  I taught the visitors about averted vision, which really is like twice as bright as looking at the object directly, it’s crazy.  The seeing was so-so; I mostly used the 13mm eyepiece, although I did throw the 8mm on there a few times.  I had a really good time showing people all of these things and giving some interesting information on what they were.  At the end of the night, I took some video of Mars, Saturn, and the Moon.  I did the moon imaging with the neutral density filter on the eyepiece, since the brighter part of the moon often gets washed out in my images.  It was still getting washed out; I should think about getting a lower-transmission filter sometime in the future.  I left it on for Mars too, since with the 25mm eyepiece even it’s so bright that I can’t see any details in the camera.  For Saturn, it’s too dim for eyepiece projection, even with the 25mm, so I used the Barlow instead, and it came out super fantastically awesome! 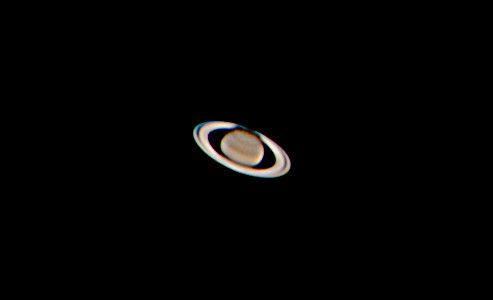 You can see multiple cloud belts, the back of the rings, and the Cassini division!  Simply incredible.  It’s from a 5:48 video, and I accepted 3,420 frames.  Super awesome.  Mars came out so-so, and there was too much convection current in the atmosphere for the moon images to come out well, especially under high power.

Posted by AstronoMolly at 1:30 PM