I should have known better than to go out when the moon was up and bright.  But alas, I went out anyway.  I had the bug.  I tried a few objects, but all were too dim to see behind the bright white light of the moon.  I imaged M101, but it came out rather dim and the background light was terrible.  I also imaged M81, but those came out terrible too.  I tried for a few others, but couldn’t really find them.  I also tried for the Blinking Planetary Nebula, which was quite bright, but too bright, actually, to see any of its detail. 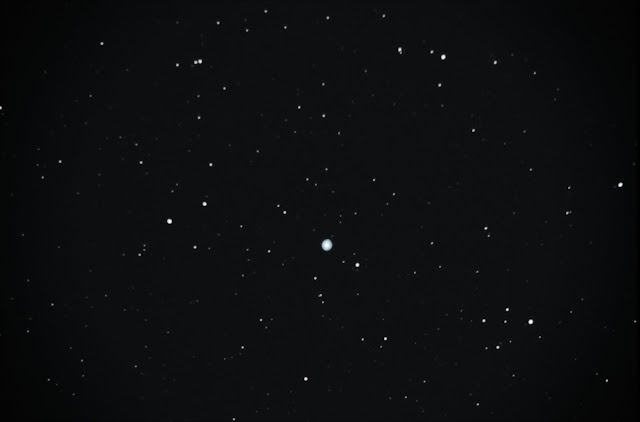 It was so bright, in fact, that the image above was exactly how it came out of DSS – usually, those are too dark to see the actual object (that’s why the background is so dark).  I didn’t look at this one visually – I should have.  Next time.

I also tried to image some planets as a consolation prize (I was able to stay out late because it was a Friday night, and I stayed out till like 2 AM), but the C11 is terrible at planets, its aperture is too big.  Maybe I should get like an off-axis small aperture for it to decrease the amount of area for badly-bent light rays to enter, to put it in layman’s terms.  I couldn’t even really get them to focus in the eyepiece (the seeing was also probably bad).

Posted by AstronoMolly at 10:34 AM