The skies were a bit scrummy tonight, but it may be intermittently clearer, so I may as well run anyway and see what I can get.  Comet C/2017 T2 PANSTARRS was in a position in the northeast that I could reach with my Paramount, so I figured I'd see what I could get.

Earlier in the day, I finally did go ahead and swap the positions of my two mounts.  It didn't make any sense that the one that didn't handle meridian flips well, and that I wasn't currently using -- my Celestron AVX -- should sit in the spot that can see further west across the meridian and wasn't so close to the tree, while my Paramount, the far more capable mount, was in the less favorable spot.  So, yes, I'd have to re-align, but with the sky quality not being great, I didn't mind so much on losing that time. 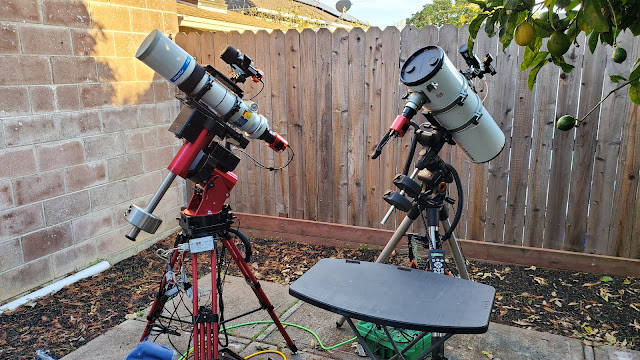 Over the last several nights, I've been hearing lots of scuffling sounds coming from inside my lemon tree, and I wasn't sure what type of critter it was.  But I finally got my flashlight on one -- and it was a mouse!  So that's what's been eating up all of my lemon rinds.

The clouds thinned and thickened, and a lovely crescent moon hung in the sky.  I had to restart the sequence twice myself because, despite the recovery options I have enabled to "try every 10 minutes for 10 hours," it still just gives up one the guide star is lost for like 30 seconds.  Sheesh.

Since it was New Year's Eve, I stayed up until midnight to ring in the new year, with a lap full of cat.  They were both cozily asleep, but they woke up pretty quickly once the fireworks from the various displays around the area started going off.  (We've been getting enough rain lately that the fire risk is low now, I guess). 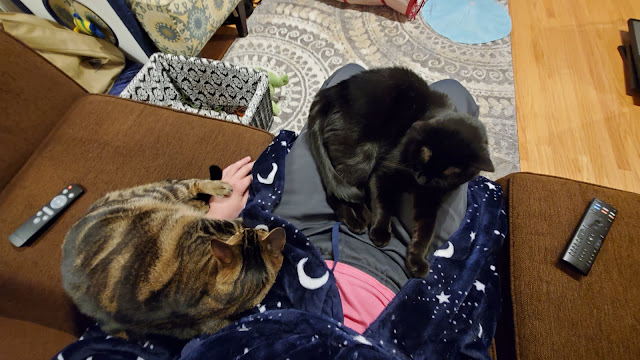 Orion is on the left, and Nova in the middle.
Also pictured: my sweet new space-themed housecoat

On the target list were the comet, M45 Pleaides Cluster (maybe, if the small window of time between the comet and the next target was big enough), M78 nebula in Orion, Cone Nebula, Medusa Nebula, the Beehive Cluster (to fill a gap of time -- I don't typically get much good out of open clusters), and then the Whale Galaxy early in the morning.

Earlier in the day, I went outside and took a panorama of my backyard using the ultra-wide camera on my Samsung Galaxy Note 10+, which made it a lot easier in my tight backyard.  It took a couple of tries to get a decent one, and then I brought it into Photoshop to make the sky transparent, and cropped and slid the image around (you can have an image wrap around the other side of the canvas in Photoshop, thank goodness) to meet the specifications for importing it into SkySafari.  It's something I've been wanting to do for a while -- I can add this panorama in SkySafari to the sky chart so that I have a better idea of when a target is going to dip behind my lemon tree, house, etc.  I can also bring it into TheSkyX's chart.

I checked on how things went in the morning, and the sequence did complete, finally!  That was exciting.  I got several good shots of the Beehive Cluster, a fair number on the Cone Nebula, Medusa Nebula, and M78, and only two on M45 due to clouds.  Only a few of the comet shots came out as well.  However, tracking was rock-solid all night!  It was so solid that I might need to start actually dithering here soon.  I haven't needed to dither in the past because there's been enough drift and random motion between frames to not need it, but eventually I'll get my rig optimized well enough that it actually stays solidly on target.

I spent the (late) morning of the next day processing the image.  I only wound up with six 3-minute frames, so I didn't even bother trying to do the dual still-comet, still-stars image -- I just did a still-comet image.  PixInsight has a tool called CometAlignment that is really great -- you import all your frames, it time-sorts them, and then you select the comet nucleus in the first and last frames, and it figures out the position in all the frames in between.  Then I just stacked those (with no pixel rejection, otherwise the stars would mostly disappear), and tried to clean it up and make it presentable.  It was extremely noisy (using a color camera with a light of light pollution often is!), but still, it's a comet, which is always cool! 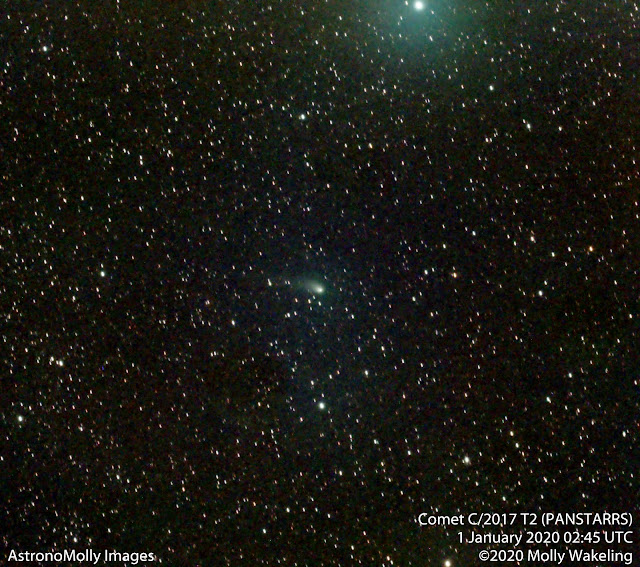 Posted by AstronoMolly at 1:43 PM