I disassembled my rigs before I went home for Christmas and brought them inside to keep them safe since I would be out of town for a week, so I spent the day re-assembling them.  I had left the tripods set up outside though (covered in the scope covers), so it was easier to get everything back up and running since the alignment models should still be quite close.

To better balance my Newtonian on my Celestron AVX mount, I took the opportunity of having everything taken apart to swap out the dovetail for a longer Vixen one that I had around.  This also allowed me to swap out the wooden bar that I had my finderscope and guide scope for the metal one that was previously the dovetail that I used to attach it to the mount, so that should be a little more stable.  It's hard to tell whether the AVX is properly balanced, however, because the axes are so tight. But I gave it my best guess. 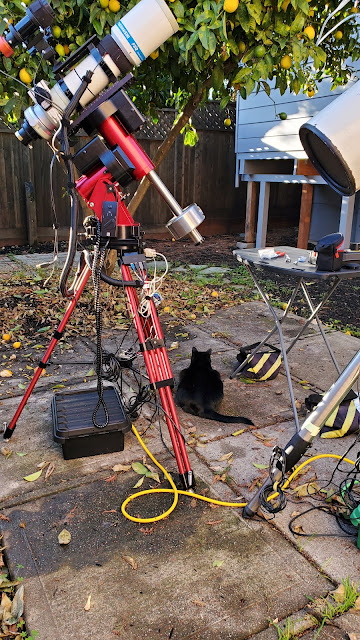 One of my cats, Nova, was "helping"

After sunset, I went out and ran re-calibration of the T-Point model on the Paramount, and also ran the Accurate Polar Alignment routine, using the star Hamal.  It was already quite close, woo hoo!

Once the T-Point model was done running, it was nearly astro-dark, and I stood outside for a bit, admiring the sky. The constellation Orion shined brightly overhead, Sirius burned bright but low on the sky, while the stars of the Pleaides Cluster sparkled up high.  I looked at orange Betelgeuse -- did it look dimmer?  There's been news circulating that it's been dimming more than usual.

Once the Paramount was off and rolling with my Takahashi FSQ-106N refractor and ZWO ASI294MC Pro camera (with a light pollution filter, the Astronomik CLS-CCD), I went inside to make some dinner.  You know, I've been at this hobby for about four and a half years, and it's still as thrilling as it was in the early days when everything is ready to roll and the images start capturing.  It's just so exciting!

After dinner, I went out to try to collimate my 8-inch Vixen f/4 Newtonian using SharpCap's experimental collimation assistant tool.  I couldn't get the calculated field lines to stay on though, and I wasn't sure which bolt I needed to move which way, and my brother-in-law texted me back about playing some Borderlands 3 together tonight.  So I put the cover back on that one and just rolled with the Paramount.  There are so many degrees of freedom in collimating a Newt!  I need some expertise to help me out.

I watched the sequence from inside before going to bed, and a tree blocked the guide scope while it was on the Cone Nebula before that part of the sequence finished, so I bumped up the time to slew to the next target, the Medusa Nebula.  Rawr.  Maybe I should swap places with my other mount...

Since I wasn't imaging on the Newtonian, I went ahead and set up my other camera, the ZWO ASI1600MM Pro, to take darks using my other laptop.  I played some Borderlands 3 with my bro-in-law, checked on the scope and how the darks were going, and then finally went to sleep at 12:45 AM...so nice to not have classes for a minute :)  I still have studying to do for my prelim exams, but I could sleep in once in a while.

When I checked on things in the morning, the sequence had stopped running on the Paramount after the Medusa Nebula.  The log button (the simplified log, showing errors and warnings) has disappeared in the new version of Sequence Generator Pro, so I opened up the actual log file, but it was so verbose that I couldn't really tell where the actual failure was after scrolling backwards for a while.  Dang it! 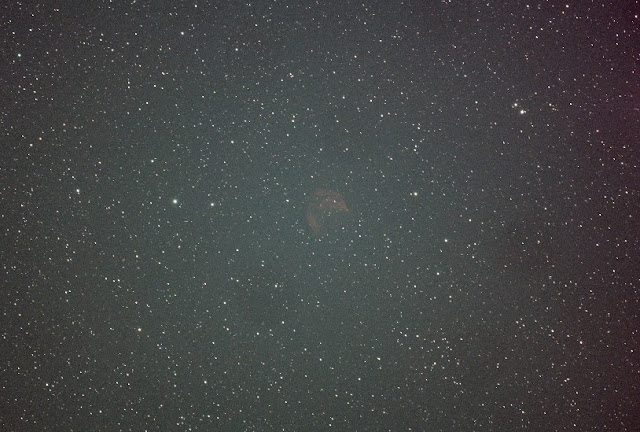 Table of Contents
Posted by AstronoMolly at 9:49 PM