In astrophotography, as with just about anything that has mechanical or digital components, things are always breaking down.  If it's not one thing, it's another!  While I continue to make progress on getting my new mount to work smoothly, I had a new kind of issue today, this time with my camera!

I went outside to swap out my color camera for my monochrome camera on the Takahashi refractor, and I remembered a really weird pattern I saw on the mono camera's sensor (ZWO ASI1600MM Pro) when I was aligning the Celestron AVX mount.  I didn't get a screenshot, but it was like a row of smallish shadow-dots.  I looked at the business end of the camera, and sure enough, there was the line of tiny dots on the window.  So I grabbed a cotton swab and gently touched it to the window, but the dots were not coming off -- in fact, after tilting it at various angles, it became obvious that they were actually not on the window, but the sensor face itself! 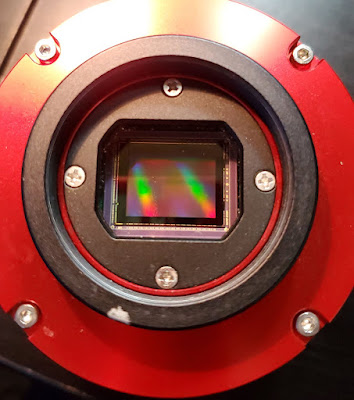 I consulted the manual, and it looks like it's not warranty-voiding to open it up.  In fact, there are instructions in the manual on how to do it!  So I removed the T-thread ring and the top plate with the window and sure enough, there was something on the sensor, or possibly it had delaminated a bit.  I touched it with a clean cotton swab, and it seemed kind of greasy. 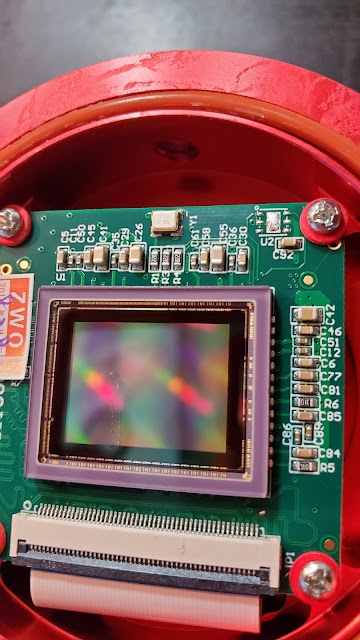 I wondered if some of the sealing grease around the front plate had somehow dripped inside while it was hanging upside-down from the Newtonian.  The manual said to clean the sensor with ethanol, so I went down the street to my local hardware store to see if they had some, but apparently it's difficult to come by in California.  They said I could maybe try a marine supply store.  I went online to see if isopropyl alcohol might work, but lots of people on forums warned that even the 99% variety, which is about the highest purity you can get, still has enough water in it to make streaks on the sensor.  Lots of people also recommended this camera sensor cleaner called Eclipse, so I went online to Amazon and ordered that plus some lint-free cotton swabs.  So I did what I could with just a cotton swab, which seemed to pick up at least some of it, and then sealed it back up. 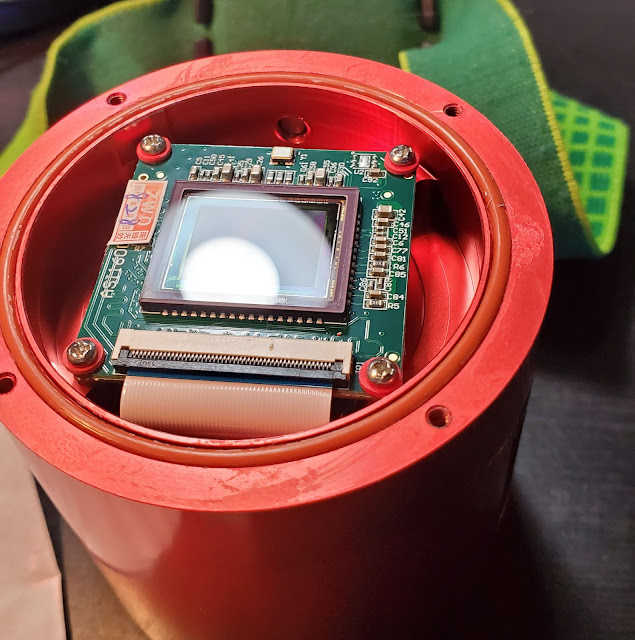 It looks like I got most of it off.

For those of you cringing at the thought of opening up your camera -- worry not, I'm a professional!  I've worked with some pretty sensitive equipment, being an experimental physicist.

When you open the sensor area, there are four dessicant tabs that you have to re-charge, since they get exposed to the air and immediately start collecting moisture.  The manual said to microwave the tabs for 2 minutes, so I did that.  With about 45 seconds left, I smelled something burning...I double-checked the manual, and it said 2 minutes at medium power.  Crap!  I stopped the microwave with 20 seconds left, and the tabs did look a little toasted.  But I put them back in anyway.  You have to do this quickly before they start absorbing water.  I'll see how things go, and see if I need to order new tabs.  If the window starts to dew up, I'll know.

My other afternoon project was getting my color camera, my ZWO ASI294MC Pro, set up with a camera lens.  I was going to have to play around a bit with the spacing to see if I could bring it to focus.  My first attempt was the camera, then the filter wheel (yes it's a color camera, but it's the easiest way to get my light pollution filter into the optics train, and then it'll be easier to swap my mono camera in and out), then my 70-300mm lens, since it has manual aperture, unlike my other lenses.  My other lenses have their irises closed until the camera tells them to open, so I was going to have to use my one manual-aperture lens.

I set up the contraption on the ZWO camera ring, which has one of those little dovetails that goes onto a camera tripod or ball mount, and put it on my tripod, pointing out the window. 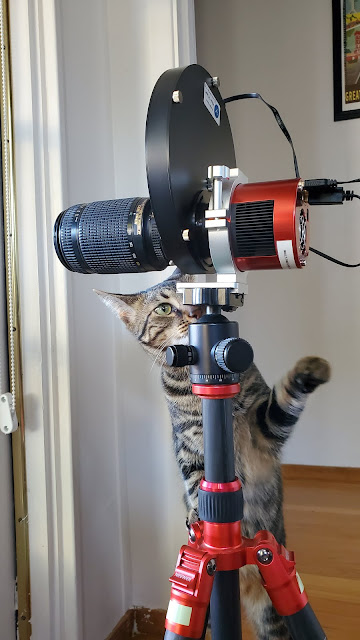 I connected the camera to my tablet and powered it up, and then tried to focus on a power pole on the street behind me.  Unfortunately, it did not quite make it.  It looked like I needed to have the camera close to the lens for it to focus.  I thought I might also try another lens, just to see, even if the aperture was small.  I looked at how the aperture opens on the lens -- as it turns out, there's just a little lever that gets moved back and forth.  So, I went to my kitchen cupboard and got a toothpick, broke it into pieces, and stuck the pieces into the hole so that the lever was held open.  The bayonet adapter had empty space around that part, so even though the toothpick ends stuck up a bit, they didn't hit the adapter.  Sweet!  That's one problem solved.  Now I can use my other lenses. 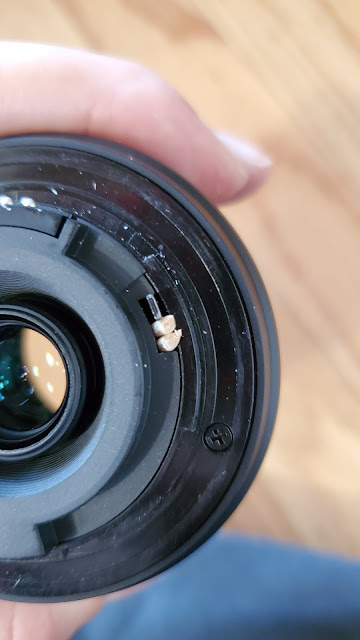 Using toothpicks to hold the aperture open on my Nikon 50-200mm lens.

In order to get the camera closer to the lens, I needed to get creative with adapters.  In the manual and in some posts on the ZWO Facebook group, I saw that people attached the filter wheel directly to the camera, without using the T-thread ring.  But that ring also flips polarity -- the camera, without it, has a male T-thread connection.  This meant I needed a female connector on my filter wheel instead of the male one that was there.  Luckily, Starlight Xpress sells a variety of different connectors, and they come off with just two outside-accessible screws.  So for $30 on Oceanside Photo & Telescope's site, I got a female connector for it.  Woot!  Should be coming soon.

To get an idea of the spacing, I took out the filter wheel, and just held the camera so that I could make sure that I could get close enough just by removing the ring.  It only needed to be a few millimeters closer to achieve focus at infinity, woo hoo!  So this should work.  Can't wait!

Night fell, and it was crystal clear!  Tomorrow night looks good too.  The Moon was waxing gibbous, so I put the ZWO ASI1600MM Pro mono camera on my Takahashi refractor with my hydrogen alpha filter.  Yes, the moon reflects the Sun's H-alpha light too, but as long as you stay about 40 degrees away or so (depending on phase), you can still get a low enough background to image.  On tonight's menu of photons for the camera to chomp on was the Pacman Nebula, Flaming Star Nebula, Cone Nebula, and Medusa Nebula.  Thanks to meridian flipping now working, this list takes me through to 3 AM, woot!  After that, the only targets up are the little itty bitty galaxies of the upcoming springtime Galaxy Season, which are too small for my 106mm, f/5 refractor.  Once the Moon goes back down, I'll probably go ahead and swap out for my 11-inch Schmidt-Cassegrain to start bagging the bitty bois.

Since the Moon was up, I went ahead and grabbed a video of it before it was astro-dark.  I wanted to process it right away, so I tried to drop it into OneDrive and have it sync across my wifi, but it just said "sync pending" for forever, so I paused the sequence, unplugged the focuser (I needed a USB port, and it was the easiest to re-connect to), plugged my USB 3.0 flash drive in, and waited about 5 minutes for it to transfer.  I processed it, and it's not too shabby! 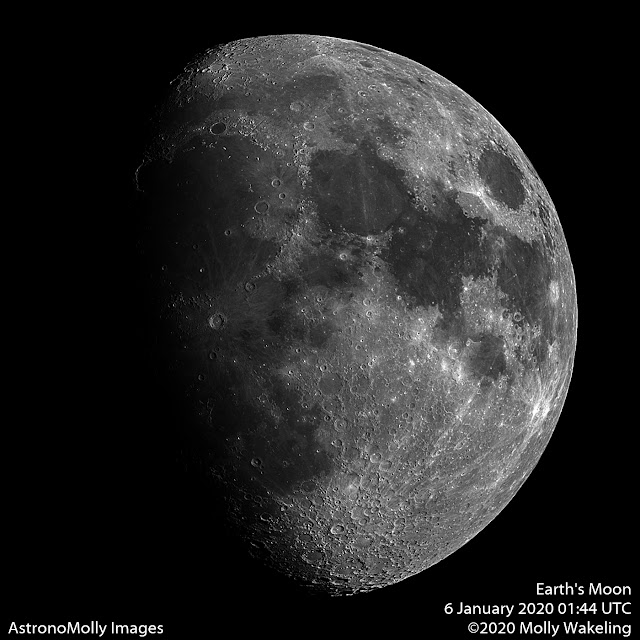 The sequence ran smoothly, and the images came out beautifully.  I didn't see any sign of the residue on the subframes.  When I checked on them in the morning, the stars were a little elongated in many of the frames.  Maybe there is some cable-tug?  I also took a new set of flats in the morning for putting the camera back on. 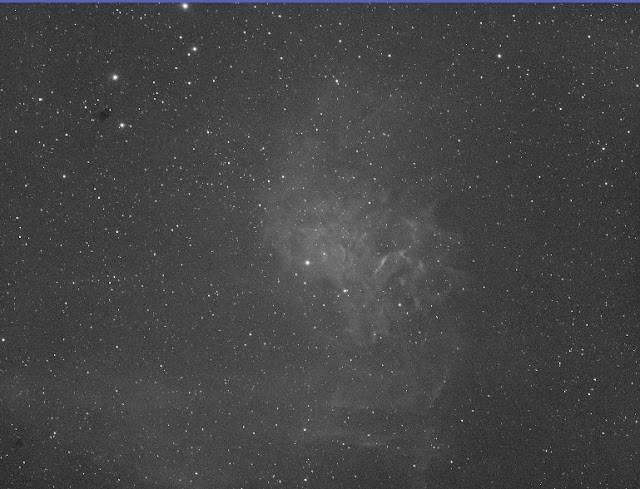 Posted by AstronoMolly at 4:24 PM