On Friday night, I didn't set up imaging because the forecast called for rain in the morning, but I did spend a little time in the evening hunting down the meridian flip problem.  I did some Googling, and one forum post said that you need to change the hour angle setting in TheSkyX to be 0 in the BisqueTCS settings, which has to do with the angle that the mount will flip itself at.  So I did that, and tested it on a star that was about to cross the meridian, and Sequence Generator Pro was able to issue the flip command, and it worked!  So hopefully that's the end of that problem.  Most of the other posts I came across were from 2016 and 2017 before some changes were made in the TSX driver and in SGP.

Tonight, it won't be properly clear until after 1 AM according to the forecast, but it was clear enough to get started around 6:45 PM.  There was a ring around the Moon, but at least I could get things rolling.

After getting the Paramount setup and rolling, I went over to my Celestron AVX with my 8-inch Vixen f/4 Newtonian on it.  My plan was to align and polar align the mount with that scope, since it would be more accurate, and then swap it out for either the Soviet Maksutov-Cassegrain camera lens I have, or one of my Nikon camera lenses, attached to my ZWO ASI294MC Pro.  I finished aligning the AVX, and was about to polar align using Hamal, but it was too close to the meridian, and the dec axis slipped out a bit, causing the gears to do the crazy, loud back-and-forth motion they sometimes do for various reasons.  So I had to shut off and reboot the mount, and after re-aligning, I used Rigel instead for polar alignment, since it was too cloudy to use a more well-placed but dimmer star.  It's best to use a star near 0 declination and near the meridian for doing Celestron's All-Star polar alignment.

Once that was all done, I parked and hibernated the mount, and covered it back up and took darks.  I'll work on getting either one of the camera lenses set up tomorrow or Monday.  I might do the Russian lens, but I also really want to do a wider FOV camera lens and try for getting the deep red H-alpha signal of Barnard's Loop and the Orion constellation area, with my color camera and light pollution filter.  We shall see!

Around 7:40 PM, I finally went inside to make dinner.  The clouds had cleared out, the ring around the Moon was gone, and the M45 area was pretty clear, which is where my sequence was at.

I checked in on my computer from my phone (using TeamViewer) around 10:30 PM and saw that the sequence was in recovery mode and the plate solve image was blank.  Huh?  Why was it blank?  Also, why was it plate solving right now?  PHD's guide camera view showed a white image too, like a thick cloud.  So I went outside to see if it was pointing somewhere weird or if it had clouded over, but no, it was clear as a bell outside!  I opened the folder where my images were saved, and the last one was captured at 9:50.  Oof.  I don't know what the heck happened.  Maybe a freak cloud rolled through?  But then the sequence finally recovered on its own and continued imaging.

I checked again at 11:25 PM, and the meridian flip on the Orion-area nebula M78 at 11 PM was successful!  It was happily snapping away.  It looked like PHD was guiding fine too, so the calibration coordinates must have been flipped like they were supposed to.  Woot!  Glad I finally got that issue fixed.

Checking on things in the morning, I only got a couple frames on the Cone Nebula, although I'm not sure why.  I got quite a few on M45, the Pleaides Cluster, but it looks like some thin clouds might have drifted through.  I got a fair few shots of M78 and the Medusa Nebula, and a whopping 30 frames on the Whale Galaxy! 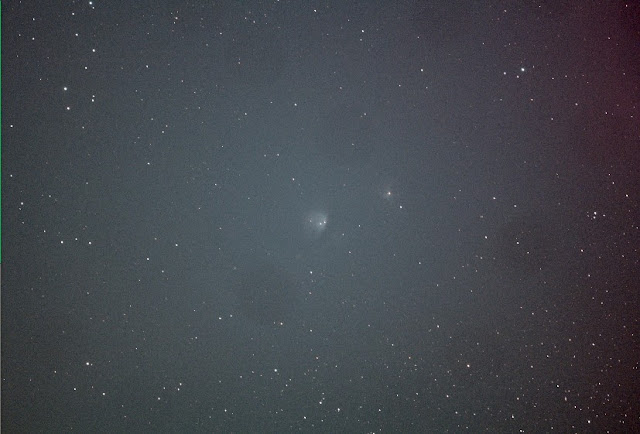 5-minute color frame on nebula M78 from my Takahashi refractor 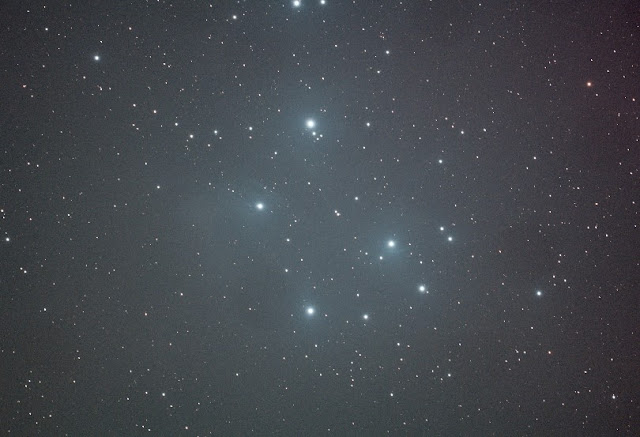 Posted by AstronoMolly at 3:21 PM