A problem with DSLR cameras is that they have a spectrum filter on them to make the images look very close in color to how the human eye perceives it.  While great for daytime imaging, it inhibits the camera's performance for astrophotography, particularly because like the human eye, the spectrum filter passes very little red light.  Of course, if you've seen all of the nebula images I've taken, there is quite a lot of red-glowing gas out there in the universe.  This makes sense, considering that hydrogen is by far the most abundant element, and that red glow is from hydrogen!

There are services out there that will remove the spectrum filter from your DSLR for a couple hundred bucks, and Canon, Nikon, and Sony (and probably some others) sell astro versions of at least one of their cameras (although they are pricey!).  The thing is, after spending all that money, you still don't have a cooled camera.  So while it may be more sensitive to red, it's still going to be just as noisy.

Instead of spending $2,500 for the Canon EOS Ra, or $3,800 for the Nikon 810a, you can spend $1,000 for a cooled astrophotography-specific camera, like the ZWO ASI294MC Pro.  No spectrum filter (or UV/IR filter for that matter -- useful for imaging the planets in UV and IR), and it's cooled.  So an experiment I've been wanting to try for a while is using a color astro camera with a camera lens to do some widefield stuff.  (I also want to capture hydrogen alpha data with a monochrome camera, but that experiment will happen later).  I finally had the chance to assemble that setup this past weekend, after I bought a T-thread-to-Nikon bayonet adapter.  I couldn't use it right away last weekend because I didn't quite have the spacing correct -- I needed a little bit less separation between the lens and the camera in order to bring it to focus at infinity.  The solution was to swap out the female-threaded connector on the filter wheel with a male-threaded one so that I could attach my ZWO camera directly to the wheel without the male-to-female adapter ring that adds a couple of millimeters.  (The Starlight Xpress filter wheel has removable connectors so that you can attach the size/thread that you need). 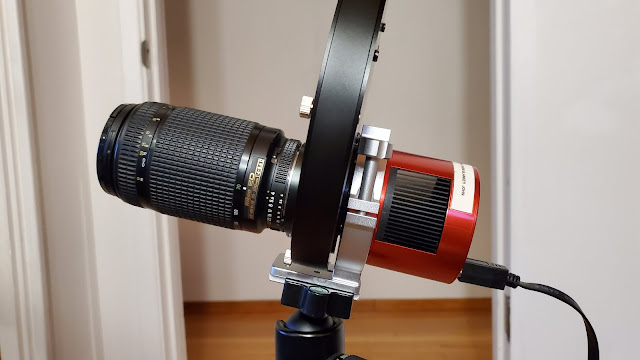 From left to right: Nikon 70-300mm zoom lens, M42-Nikon bayonet adapter, Starlight Xpress filter wheel, ZWO ASI294MC Pro attached without the male-to-female M42 ring.  (M42 and T-thread are talking about the same thing).
The silver clamp is one that ZWO sells for their cameras.

I connected the camera to my tablet once again and pointed it out the window at a power pole across the street.  I focused the lens, and I was able to bring it into focus!! 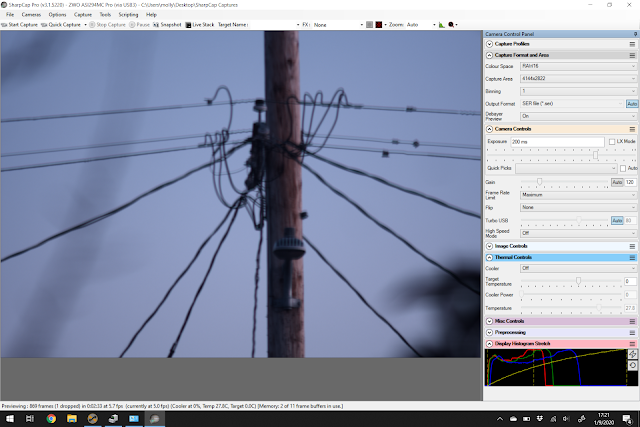 The next step was to actually get it attached to my mount.  The clamp from ZWO has a tripod-sized connection, not a Vixen-sized one, so I needed a way to bolt it to a Vixen dovetail.  I tried just bolting it to a spare one I had, but the side with the grooves in it so that the bolt head would not interfere with actually attaching it to the mount was on the wrong side for the polarity to be right to attach the dovetail rail to the mount.  (Sorry, hard to explain without pictures...which I forgot to take).  So instead, I grabbed this short wooden dovetail I had from another scope, which has a few 1/4-inch holes in it, and attached it to that.  Got it all connected!  I attached it to my Celestron AVX mount. 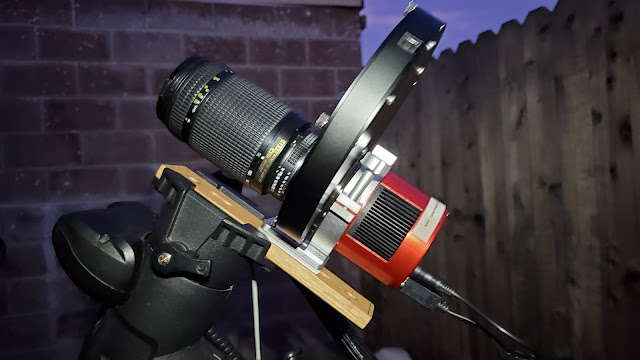 It was getting darker as I finished putting things together, so it was time to grab the laptops and get rolling.  In addition to this novel rig, I also ran my Takahashi FSQ-106N refractor with my ZWO ASI1600MM Pro and a hydrogen-alpha filter atop my Paramount MyT.  Over on the AVX with the camera lens, I slewed to Aldeberan to focus (I left the mount aligned from when I had another telescope on it), and I added a calibration point after centering it.  To focus, I grabbed a tiny Bahtinov mask perfect for camera lenses that I had, but even with 2-second exspoures, a high gain, and a super stretch on the histogram, I couldn't quite see all three diffraction spikes with the lens at 70mm.  So I got it somewhat focused with that, and then getting the star as small as possible.  There was a little ring around the star because my lens is pretty achromatic, but it did, indeed, come to focus!  Very exciting.

The next challenge was trying to get the plate solver to work so that I could get targets accurately centered.  I messed around with the settings in PlateSolve2, which is the plate solve program by PlaneWave that I use within SequenceGenerator Pro, but couldn't get it to successfully plate solve -- I think the images were just too big of a field, at 15x10 degrees.  I also didn't see a way for it to use a subframe or a ROI (region of interest).  After some Googling, I ended up just using Astrometry.net's online blind plate  solver, which is much slower, but it worked!

The first target I queued up in SGP is one I've been wanting to do with a "spectrum-modified" camera for a while, which is an Orion constellation widefield, including Barnard's Loop.  It wouldn't be high enough until 8 PM though, so I added a widefield of the Taurus region, to get M45 (Pleaides Cluster) on one side of the frame, and the California Nebula on the other.

After a couple of subframes came down looking at Taurus, I took a look at them and remembered that this lens has quite a lot of curvature -- I can really only use about the inner half to 2/3rds of it.  The framing at 70mm put M45 and the California Nebula both in the nasty part of either side of the lens, so I changed the target location to center M45 instead.  When it was slewing there, it took a weirdly long time (I was doing this from indoors), so I thought maybe it was meridian-flipping.  But it shouldn't have been time for that yet.  The plate solve solution was also waaaay far off in right ascension, and it wasn't getting better as SGP re-centered my mount.  So I went outside to see what was up, and yes, it did flip, but it was hitting my software slew limit for that side of the pier.  (I have it set to not go beyond 90 degrees, aka straight up, since my AVX has a loose dec axis, and the axis can slip out from the gears, causing problems).  For some reason, my AVX keeps resetting the meridian setting to "favor west," so I disabled the meridian setting (again) and went back inside.  When I re-started the sequence, it went back over to looking at the eastern sky -- perfect.  While it started imaging, I went to work figuring out what target to have it do after the Orion constellation. 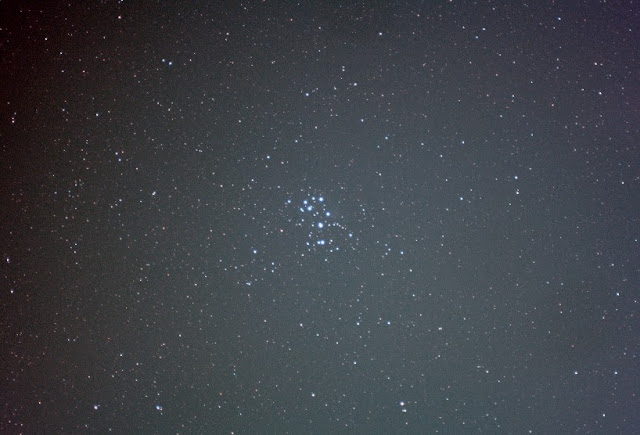 Back over on the Takahashi, the sequence hadn't actually started yet because the cooler on the camera hadn't reached the set temperature yet.  But it had been running for a while...it was only at 0.5C, and only 12% power!  Why?  And it wasn't increasing the power.  Ah crap.  Did I mess something up when I opened it up to clean the sensor?  I connected it to SharpCap and turned on the cooler there, and it seemed to function normally.  Phew!  So I disconnected and reconnected everything in SGP and restarted the program, and then it worked normally after that.  Weird.

Meanwhile, my first Orion constellation image came down -- I could see M42 quite well, the Flame and Horsehead Nebulae a bit, but no Barnard Nebula.  It was probably buried in the light pollution, I figured -- it's also a full Moon tonight.  So I changed the exposure time from 3 minutes to flipping back and forth between 1 minute and 5 minutes. 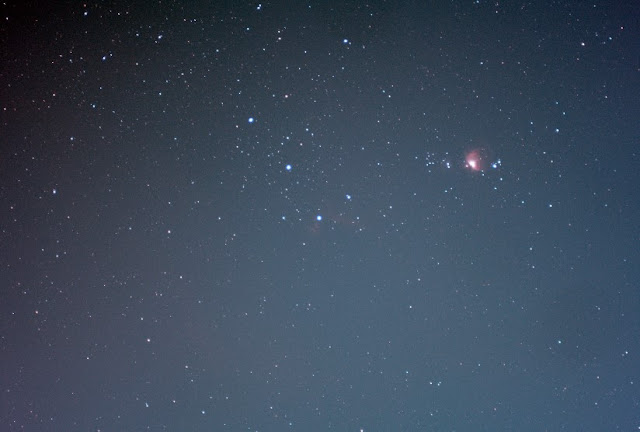 It was 8 PM then, time to go make some dinner!  Before doing that, I added a few more targets I came up with to the camera lens sequence: the Seagull Nebula (probably won't come out well, but why not try), the Beehive Cluster (I don't typically do open clusters, but I needed something), and the Coma Berenices region centered on the Needle Galaxy.

In the morning, I went to check on things; the Paramount setup aborted due to a failed meridian flip at some point, and didn't run my last target for the night, galaxy M106.  I also only get one frame on the Medusa Nebula.  I went through the log, but couldn't quite figure out what exactly made it abort.  In addition, I forgot to tick the "run" box for the 5-minute-long frames, so they didn't run.  On the other hand, the sequence for the camera lens over on the AVX ran all night and completed successfully.

Table of Contents
Posted by AstronoMolly at 3:55 PM