Once again, the forecast called for cloudy skies, but it ended up clearing up.  One of the reasons I love having my scopes set up in the backyard is that I can just run out there with my laptop and get rolling quite quickly.  Which is exactly what I did!  I went and saw the new Star Wars movie, #9: The Rise of Skywalker with some of my classmates, so I got home a little before 11 PM.

I had updated Sequence Generator Pro to a new version that came out, and to my delight, the autofocus routine was adjusted to fit a quadratic function rather than the intercept of two lines.  However, it encountered some Star Wars of its own -- trying to autofocus was not going well.  It kept failing to get a good fit, and kept trying and trying and failing and failing, and I couldn't figure out why. 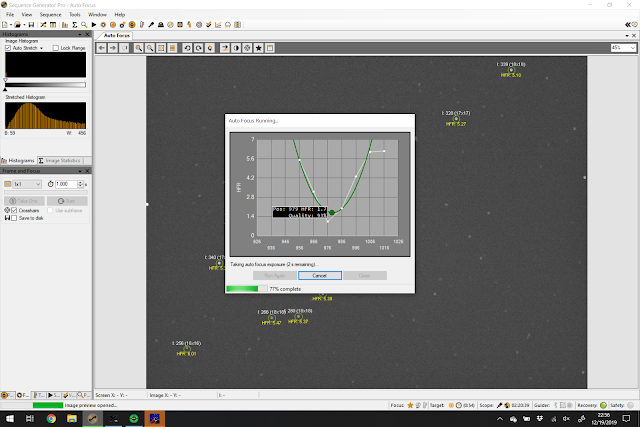 It would look good, and then... 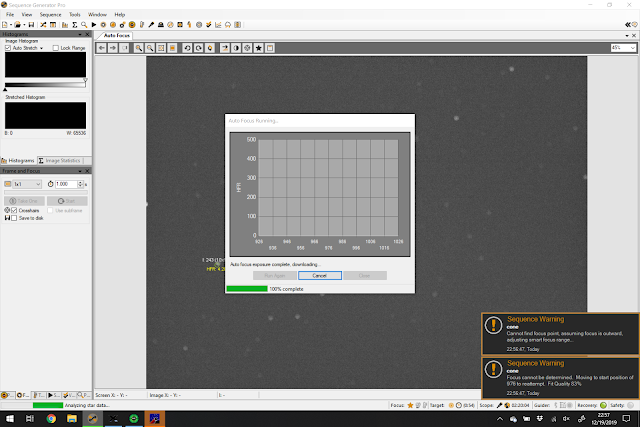 After enough failures, I just turned off the autofocus routine and hoped for the best.  If the temperature stayed about the same the rest of the night, it should be fine.

Then, SGP started freezing up, and then my entire machine, so I had to go out there to see what was up.  Task Manager showed that a "System Interrupt Process" and OneDrive were eating up all my CPU, so I force quit everything and started over.  My last Microsoft Surface 3 tablet worked really well, but my new (refurbished) one after busting the screen on my last one, despite having the same specs, has some issues with CPU and disk usage sometimes.  Sigh.

I was finally imaging again by 11:40 PM, and I had to get to bed.  My Quantum Mechanics class oral final was in the morning, and I should get some sleep.