Another library telescope program!  This one had a smaller crowd, but the town this library is located in is a smaller community.  There were five patrons, plus one librarian.  But they seemed to get a lot out of it, and hopefully word will spread for when I do another round of these in the fall.

I had just returned from a conference earlier that day – I got home at 6 PM, ate dinner, and turned around and drove the half hour to the library!  The first leg of my flight was delayed due to a maintenance problem, so I nearly missed our connection in Charlotte.  I ran to the gate, and just managed to make it.  Then that flight was delayed as well due to another maintenance issue.  So I almost didn’t make it!

We started out inside, and I showed them the parts of the telescope and how it works.  Then I loaded up Stellarium on my laptop connected to a projector and showed them how to find a few things in the night sky.  Then we went outside, but unfortunately there was quite a bit of cloud cover.  Luckily, it wasn’t very thick, so we were still able to look at two things: the moon and Venus.  They got to practice finding things in the finderscope, moving the scope around, and focusing.  The red-dot finders take some practice to figure out exactly what angle to put your head in order to see through it. 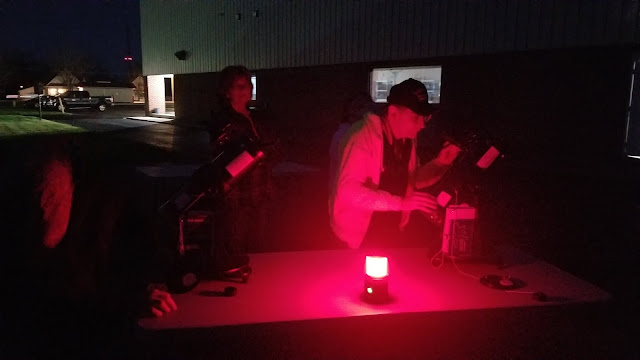 The waxing gibbous moon looked pretty cool through the cloud cover, and with the zoom eyepiece on that scope zoomed into 8mm, you could see that Venus had some spherical shape to it as opposed to just being a really bright star.  It was a good time as always!

Posted by AstronoMolly at 8:46 AM