Last year, my astronomy club furnished two small telescopes to one of the local libraries.  More and more astronomy clubs and libraries are teaming up to bring astronomy to the public this way, and it's fantastic!  Library patrons can check out a telescope to bring home for a week and do some astronomy from their backyard!  Several other libraries in the area thought they were awesome, so they bought their own.  One of the club members modified the scopes to make them more user-friendly and less likely to lose parts - the eyepiece gets glued in, strings attach the objective cover and eyepiece cover to the mount, a plastic plate is put over the end so the primary mirror doesn't get messed with, the button-cell battery in the red dot finder is replaced with two much more easily-accessible AAA batteries, etc.  Instructions and star charts are also included and are clipped onto the mount and attached with string.

The telescopes our local libraries have, and I think many other libraries as using as well, are Orion Starblast 4.5's, which are 4.5-inch Newtonian telescopes on tabletop alt-az mounts. 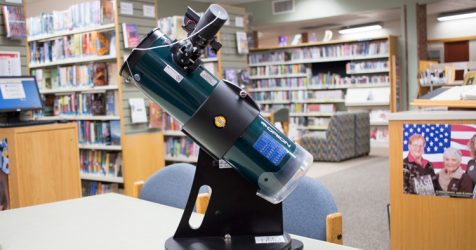 The first program I did with these was actually last August, just before the solar eclipse, as part of a "Millennials" series one of the libraries was putting on.  (Some decidedly non-milennials joined as well!)  I talked about the upcoming eclipse, how to watch it, and then also about the library telescopes, including a demo and looking at the some various objects.  The same library invited me back again on March 22nd, and I showed a group of about 15 people on a chilly but clear night at a local park how to use the telescope, and then we looked at a few things, such as the Pleiades cluster and the Mizar-Alcor double star.  I was actually rather impressed with what we were able to see with this scope!  And it was very simple to use.  I was glad for this, since as an imager, I have to shamefully admit I only have a rough idea of where the things I image are.  (The Rosette Nebula is somewhere off Orion's right shoulder...M81 and M82 are in the north somewhere...)  But I was able to find things pretty readily (I took some notes on where to find things using my SkySafari app, and since that scope has a fairly wide field-of-view, I just sort of hunted till I found it...we're mostly looking at bright things anyway!) 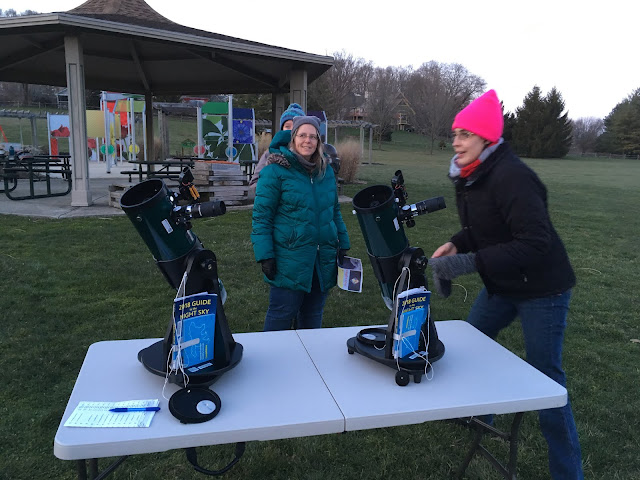 I liked this program enough that I got in touch with the four other libraries in the area who had purchased their own, and I have done this at two of them so far - two to go!  One of them we had to hold indoors, however, due to cloud cover and rain, so I'm not counting that toward my log.  (And I forgot to log the first one!)

For the indoors one on April 10th, I showed patrons (we had a group of nearly 30, including kids, which was amazing for that small community and the fact that it was cloudy!) how to use the scopes, and had them look through the eyepiece just at the wall to get a feel for it.  Then I pulled up Stellarium on my laptop and showed them how to find things like the Double Cluster, Orion Nebula, Polaris, and Mizar, and pointed them to apps and websites where they could find star charts and interactive sky maps.

On April 11th, I did the program with a group of about 8 at another local park.  It was chilly, but not too bad.  We did have some fairly significant cloud cover roll in, however.  Fortunately, Sirius poked its face out through a thin section of clouds, so the patrons got to practice using the scope on an object that was very easy to find.  They seemed to get the hang of it, and I think they feel much more comfortable with the scopes now (several had checked them out previously, but had trouble figuring out how to use them).  There were also two young boys (maybe 5th grade) who asked some really smart questions on astronomy and astrophysics, like what is dark matter and what does it do, what will happen to the sun when it dies, things that I was more than happy to dive into and go way over time! 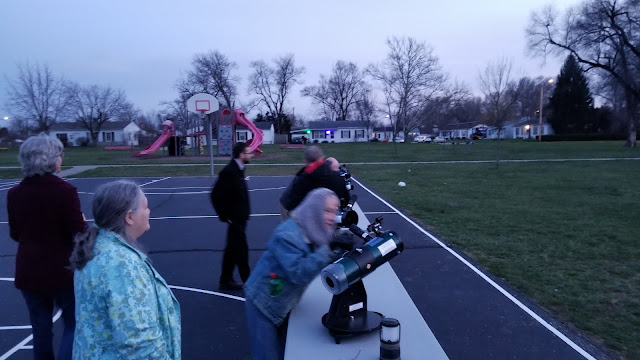 I've got another program next week, and then one in July sometime!  And I'll probably repeat some of these with the libraries again in the fall.  I love doing outreach!

Table of Contents
Posted by AstronoMolly at 4:29 PM