The forecasts were looking very promising for Thursday night, so I loaded up my camera gear and went out to the observatory to image!  It’s been about a month since I was last out there.  It’s “Galaxy Season,” the time of year when the winter Milky Way and all the nebulae around Orion are setting early, but when the summertime Milky Way isn’t rising until late at night.  This means we are seeing above the plane of the galaxy in the first half of the night, a great time to see the plethora of galaxies that are visible in amateur scopes, including dozens in Coma Berenices.  The Needle Galaxy is a rather bright and rather large member of that group, making it a worthy target for the astronomy club’s 5-inch refractor.  I’ve only imaged it once before – at last year’s Texas Star Party, through my 11-inch Schmidt-Cassegrain, after seeing it in a fellow club member’s Dobsonian scope and being surprised at how big and bright it was for not being a Messier object.  How did Charles Messier miss this gem?? 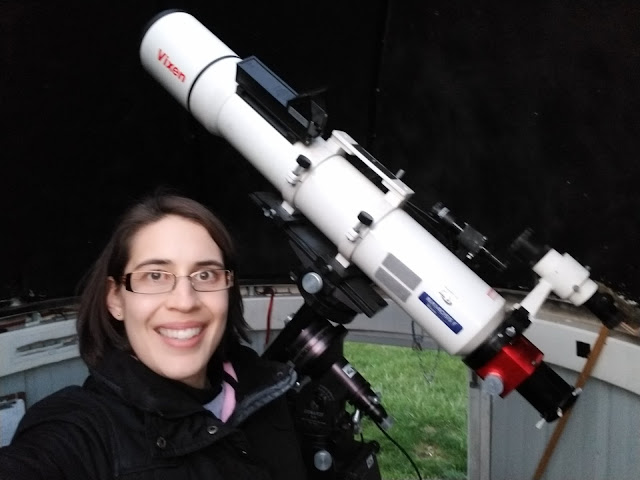 Finally, a good selfie with this scope.

Now that spring is finally shoving winter back into its deep dark hole, night is coming later now – sunset wasn’t until about 8:15 PM.  Since it was a weeknight, I could only be out until about midnight or so, but I decided to image with the ZWO ASI1600MM Pro anyway.  I decided to go ahead and try to get a full set of LRGB data, since I’m not going to be able to get out to image again mostly likely until after the Texas Star Party.  So I planned on taking an hour’s worth of luminance data, and an hour’s worth of color data, which is 20 minutes on each color channel.  I stuck with my standby exposure time of 5 minutes, although next time I think I will try doing many shorter exposures, which I’ve read online is really much more in this camera’s wheelhouse.

I also wanted to try using AstroTortilla, which is an application that does plate solving and will slew your scope to center the object you want for you.  I had set it up earlier that day, and during installation, you have to set the range of your fields-of-view, largest and smallest, to cover all of your gear setups.  My smallest FOV is 21 arcmin x 16 arcmin, which is my ZWO attached to my 11-inch SCT without a focal reducer (what I might do for planetary nebulae and small galaxies, and my largest is my Nikon D5300 attached to my Borg, which is about 2.6x1.8 degrees (the largest FOV on a mount that AstroTortilla could control, anyway – so this excludes my Vixen Polarie, of course).  During setup, you select the index files that not only cover this range, but on the narrow end includes 20% of your smallest FOV, which for me is the 2.8-4 arcmin index file.  The smaller the FOV, the larger the index file for plate solving is (the index file is the reference images of the night sky to compare your camera’s images to), so I had to download several gigabytes of data.  But it finished just before I left the house!

After getting all attached and powered up, a process that went smoothly, it was still light out, so I slewed to the moon.  I had to do this manually – the catalogs in Gemini’s computer-control app contain a lot of catalogs of both bright and dim objects, but it does not contain a catalog of solar system objects!  I opened up SharpCap and got all the settings set how I wanted them, and I had a pretty decent frame rate going of about 15 fps, but once I hit the Capture button, it fell to like 0.5 fps and it was dropping more frames than it was saving.  I eventually found the culprit: my tablet’s hard drive was nearly full!  I had forgotten to move some darks I had been taking recently over to my desktop, and the 16-bit nearly-full-frame images I was saving off were quickly filling up the leftover space.  I went through and deleted as much extraneous stuff as I could (forgetting all about the 21 GB of movies I had on it for airline trips).  I deleted previous Windows installations and some other things, and managed to create just enough space to record a few captures on the moon, and later Jupiter, but using only 8-bit images instead of 16 bit.  I got much better frame rates after that – nearly 50 fps when I used a smaller region-of-interest for Jupiter at the end of the night.  I was worried I wouldn’t have enough space for the rest of the imaging I was planning to do that night, but I was taking long exposures of the Needle Galaxy, so I didn’t fill up as much memory.  Needless to say, I went onto Amazon and bought a 64GB micro SD card that very night to put into my tablet!
Anyway, I got some nice images of the moon! 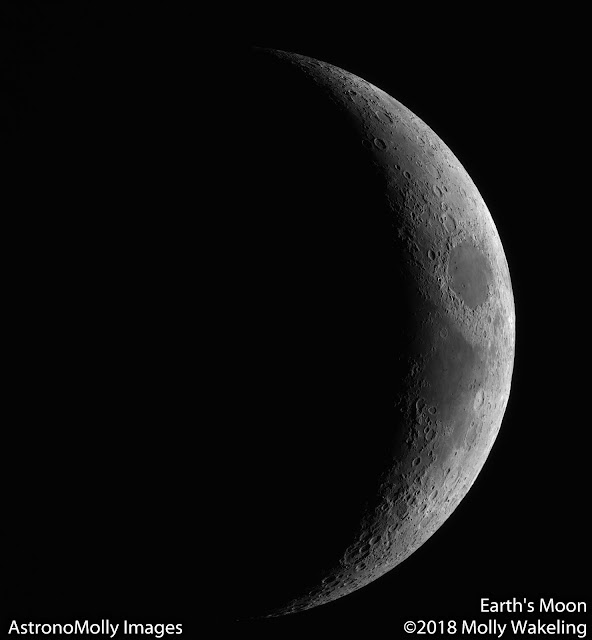 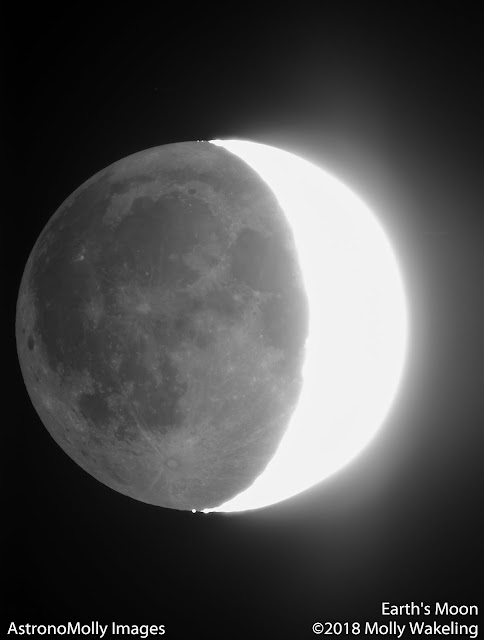 Once it was dark, I slewed to Arcturus for focusing, and the diffraction spikes from my Bahtinov focusing mask already looked pretty close since I had just focused on the moon, so I slewed over to the Needle Galaxy.  AstroTortilla did appear to start working, although I had to close out of SharpCap so that it could talk to the camera, but it wasn’t able to plate-solve the image.  With how little time I had that evening, I decided I’d try that again on a different night, and since the Needle Galaxy is bright, I was able to see it readily in Sequence Generator Pro with 3-second frames when I turned on auto-stretching the histogram.  I got it centered, and started my luminance frames.

Those went well, although they looked out-of-focus in the raw frames.  Raw FITS frames, which is what comes off of astro cameras, look grainy and terrible, and sometimes also out of focus.  But I had just focused and didn’t move the scope very far, so I felt pretty certain they were actually in focus.  Guess I’d have to find out! 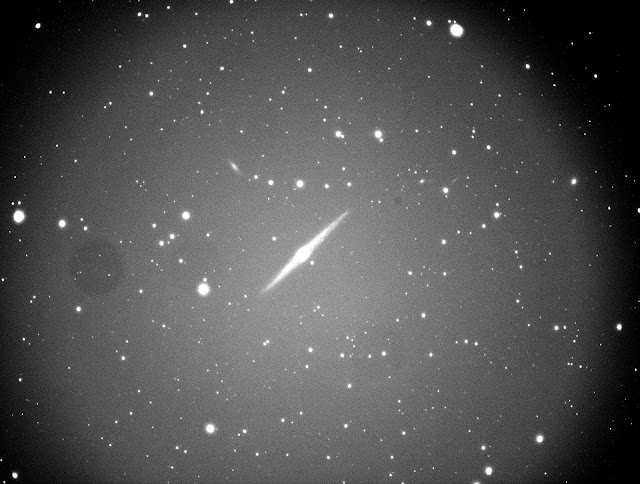 Single 5-minute luminance frame on the Needle Galaxy.  It's not as blown out as it looks - FITS files have adjustable luminance curves.

After an hour of 5-minute luminance frames, I rotated my filter wheel to red for 20 minutes, then green, then blue.  All went smoothly, and guiding looked great – I was getting only about 1.5 arcsecs of error, which is pretty decent.

After midnight, when I was done capturing the Needle Galaxy, Jupiter was up, and I couldn’t resist!  However, it is very tiny inside that 140mm aperture, 800mm focal length refractor, so I was pretty sure it was going to come out poorly.  I took the data anyway, and upon further review, yeah it was pretty crappy.  I’ll just have to set up my 8-inch in my front yard soon!  Luckily, you can image planets out to Saturn easily under even a full moon because of how short of exposures you need, so I can do that next week if we have some clear nights that aren’t freezing.

I didn’t get a chance to process the Needle Galaxy image for a few days, but I stayed up late the following Saturday night and rush-processed them before heading off to a work conference so I could write the blog post :D  I didn’t think it was going to turn out that well anyway, since I only got four frames per color channel, which gives poor signal-to-noise ratio for the color channels.  I also didn’t have a set of bias frames for the temperature I ran the camera at (-25C) yet, but I decided to stack without them anyway.  I ran into a snag early on though – a weird issue with the new version of DeepSkyStacker that just came out, 4.1.0.  I was really excited about it because they finally had a 64-bit version, which means it should be able to use a lot more RAM.  I stacked the luminance, red, green, and blue frames, saved them out as 32-bit TIFFs, and imported them into Photoshop.  I zoomed in to see how well the detail on the luminance channel came out and saw that the image was full of holes!  Missing pixels everywhere.  So I went back to DSS and turned off hot pixel removal, just in case (I hadn’t had troubles with that before), but got the same result. 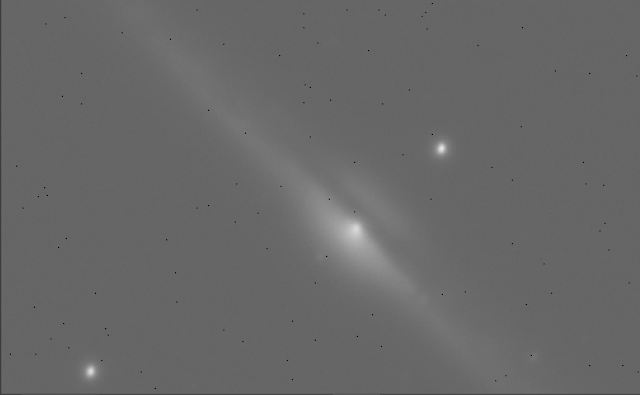 I thought next that maybe it had to do with the lack of bias frames, and since I can control the temperature of my camera and am therefore not at the mercy of the exact outdoor temperature, I decided to throw the camera out on the back porch like I always do to take darks and just grab a set of bias frames real quick.  Bias frames are the same gain and temperature, but the shortest available exposure time, as your light frames, so they’re quick to acquire.  However, it was kind of warm outside, and my dryer was running, blowing hot air right onto my dark capture spot!  So the only alternative was to put my camera in the fridge! 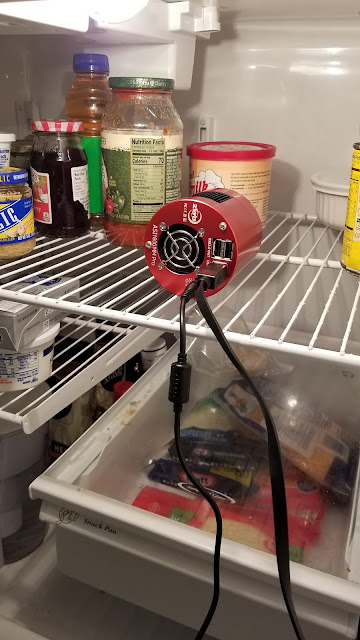 The door still closed easily over the cables, so I let it cool, grabbed the frames, and was back in business!

So I re-stacked just the luminance frames with the biases, aaaaaand still had holes in my picture.  So there were two more options: either my newly-acquired flat frames from a few weeks ago were bad, or something was wrong with the new version of DeepSkyStacker.  To check, I launched the older version of DSS and processed the images – and they came out fine, no holes!  Now I need to get onto the DSS forum and report the problem.  And see if anyone else is having this problem, probably over on Cloudy Nights.

I stacked all the channels in the old version of DSS, stretched them in Photoshop, and saw that my flats didn’t flatten very well, so I had to make synthetic flats.  (I’ll write a blog post on that soon, I promise!)  I combined the LRGB all together, adjusted levels and curves to get the color balance and contrast I wanted balanced against the high noise that’s a result of the low number of frames, ran the blue halo removal routine in Noel Carboni’s astronomy tools for Photoshop toolkit (which works well on my DSLR images, but less well on my astro camera images, it seems), and here it is! 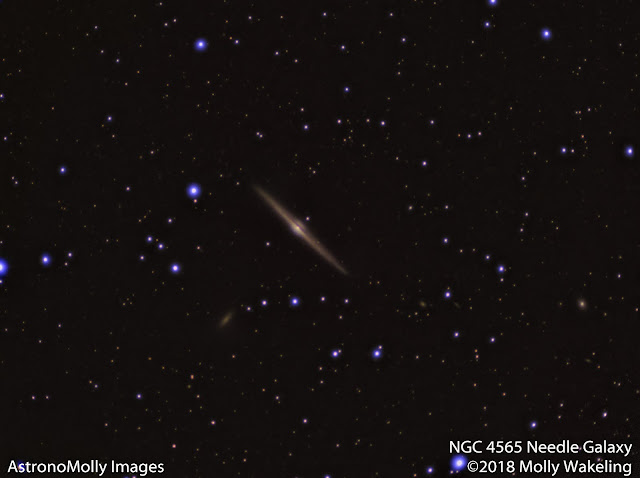 Kind of noisy, got some weird dark halos around the stars as well that let me not be able to blacken the background as much as I would have liked, but not bad coming from my light-polluted area on an achromatic refractor!  I’ll most likely image this again at the Texas Star Party with this camera on my 11-inch SCT to try and get better detail.  This time, I’ll try many shorter exposures though to see how that works, since this is a brighter target that could probably support that method.

Astrophotography is always an adventure!

Table of Contents
Posted by AstronoMolly at 7:37 AM