In addition to the outreach I do with the local astronomy club, I am also a Girl Scout troop leader, and sometimes I do astronomy nights with local troops.  A local Brownie troop (2nd and 3rd graders) invited me to their campout at one of the nearby Girl Scout camps.  It wasn’t in a particularly dark location, so I had to choose my targets carefully; in addition, elementary schoolers are definitely not interested in looking at "dim fuzzies".  Fortunately, the moon was a nice waxing crescent, and there were a few other interesting things to look at.

I drove about an hour to the camp with my 8-inch Celestron Schmidt-Cassegrain and its NexStar alt-az mount loaded into the back of my car, and arrived about an hour before sunset.  I also brought out my new eyepiece, a 40mm focal length, 2-inch monstrosity of a Plossl made by Meade.  One of my fellow club members gave it to me.  The FOV is so large that in conjunction with my 0.63x focal reducer, I could see the secondary mirror as a darkened area in the center when I was focusing it on a nearby tree!  One of the leaders had also checked out one of the library telescopes I’ve been doing outreach events with lately, so we set that up on a picnic table as well. 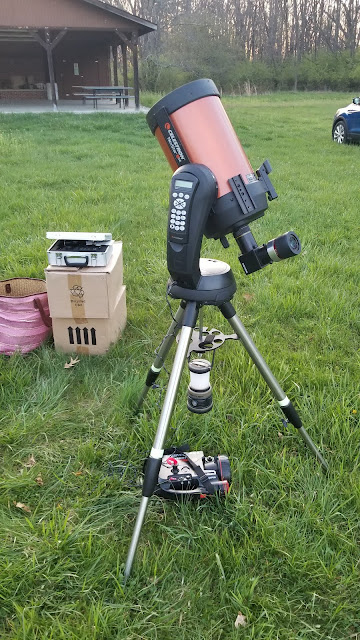 When I arrived at the lodge they were staying in, I was dismayed by the height of the trees.  But they pointed me to a field that was right next door, and it was perfect!  So I got my gear setup, and then went back to the lodge to advise the girls to dress warm.

The waxing crescent moon was already bright, as was Venus, which was high in the western sky.  I aimed at Venus first, since it wouldn’t be around for long before it sank behind the trees.  I swapped the 2-inch monstrosity back out for my 1.25” 17mm Plossl so that they could have a bit more of a magnified view.  I didn’t want to zoom in too far though, since I hadn’t aligned the scope yet (it was too soon after sunset for stars), and aligning on a planet has gotten me mixed results on that NexStar mount as far as how long it will stay on that object goes.  Venus mostly looks like a fat, bright star, and the girls were not terribly impressed.  As they cycled through, I talked about some Venus facts, like its thick atmosphere, hot surface, and runaway greenhouse effect, which had them worried about what greenhouse gases might eventually do to the Earth.  Then I turned the scope to the moon and first just had my 1.25” 25mm eyepiece in so they could see the whole thing, and then one of the leaders asked how much I could magnify it.  With a focal length of 2000mm on the scope, and my shortest eyepiece being 6mm, I can do 333x, so that’s what I did!  The atmosphere was pretty decent, so we got a nice view of some of the craters near the terminator.

I took a break from my scope for a bit to show the girls how to use the library telescope so that they could try it out while I was aligning my scope, now that we had plenty of stars.  I also showed them a few of the more easily-visible constellations, like Leo and the Big Dipper, with my purple laser pointer (I have terrible luck getting the green ones to work – it seems like the frequency-doubling crystals in those things are always falling out of place).  The purple is less well visible, but not bad. 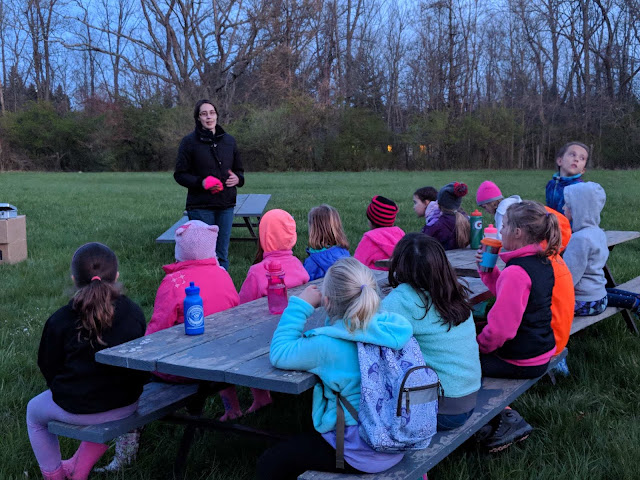 I aligned on a couple of stars, and slewed to M67, an open cluster in Cancer, up and to the west of star Procyon, about halfway between there and constellation Leo.  It’s fairly bright, and looked nice in my SCT.  At that point, most of the girls were getting too cold, so a few of the parents took them back to the lodge, and a couple stayed behind to keep trying on the library scope.  The adults were interested in seeing a galaxy, so I slewed to M51.  It was just barely discernible against the moonlight and the light pollution (the area was rated orange on the Bortle scale, according to DarkSiteFinder), but after looking at it for a minute or so, it would start to come out.  I also showed them a picture so they knew what they were looking for. You could see the two cores of M51 and its partner NGC 5195, as well as some nebulosity around M51’s core.  I explained how it was 23 million lightyears away, meaning that the light was emitted 23 million years ago and was just now being absorbed by their retinas.  It’s always amazing to realize that.

Unfortunately we were not up late enough to see Jupiter, so I haven’t had a chance to see it yet this year.  But soon, I’ll pull out the 8-inch into my front yard and do some imaging of it with my ZWO, hopefully when the Great Red Spot is visible!

All in all, a fun evening!  I was also prepped to teach them a few camp songs related to space – one about satellites, “Baby Moon,” and “Star Trekkin’,” but ended up not having time.  Darn!

Posted by AstronoMolly at 8:00 AM