Second night out on the back side of Casper Mountain!  And I have a new toy!  At ASTROCON earlier that day, I bought a Vixen Polarie tracker.  It's a little device about the size of a large point-and-shoot camera that runs on AA's (or a USB power source) that you throw onto a tripod, aim at Polaris, and then it will track the sky wherever you aim your DSLR.  Vixen had some demo units on sale for only $200!  So I put my Nikon D5300 on it with my 50-200mm lens and did some testing.  Pointing south toward the Milky Way, and only polar-aligned using a little hole in the side (you can also get a little polarscope for it to do a more precise alignment), I was able to get at least 4 minutes at 100mm and f/5 with no star trails.  At 5 minutes, the stars started stretching a bit.  So I aimed it at Antares to image the Rho Ophiuchi complex, which I also imaged at the Texas Star Party, but with a little too long of focal length to capture as much of it as I wanted to.  I got about 30 subframes on it, but I don't have any 4-minute dark frames, so I will need to go home and take those before I can process these.

While the Polarie was going, I also set up the Borg on the NexStar mount again, but with my D3100, which lately since my old tablet's USB port is starting to go, I've been having to trigger manually with my remote shutter.  I aimed it toward M31, and there was some pretty awful periodic tracking error and what looks like the mount actually moving a giant amount for some reason, and M31 bounces all around, but I got 75 subframes on it, so it was all averaged out in the end.  The image actually came out pretty all right! 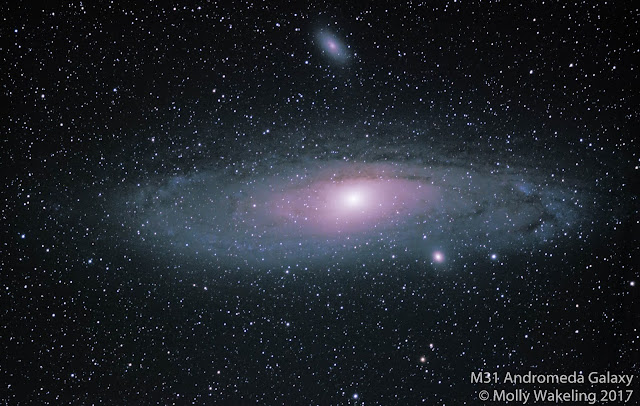 I was hitting the remote shutter button as we walked around gazing through other people's scopes, since my shutter runs on a 2.4 GHz wifi band and can reach a few hundred feet.  We looked at the Veil Nebula, the Double Cluster, a cluster of double stars that I can't remember the name of, globular cluster M13, M27 Dumbbell Nebula, the Helix Nebula, and M31 Andromeda Galaxy.  The Veil Nebula looked fantastic through a 100-something-mm refractor, and the Helix through a large Dob with an OIII filter I could actually finally see!  I have not been able to see it before.

Table of Contents
Posted by AstronoMolly at 5:20 PM