Not only is this trip #50, but it is the one-year anniversary of my being an astronomer!  Averaging nearly once a week for bringing out the telescope is quite a feat.
I got new ethernet cables for the CGE mount ($15 on Amazon for two-foot shielded ones), and they worked like a charm!  Telescope behaved properly all night.  And I do mean all night – I was up till 5:30 AM.  I ran the telescope on AC power, and the dew heater on high on the battery, and the battery still didn’t yellow-line.  I had to run the hair dryer twice though, even with the dew shield.  I’m glad the club has a few of those.
I didn’t start alignment and stuff until after the camper stargaze, so at about 11 PM; I brought my C8 for that.  I pointed it back and forth between Saturn and Mars, and delighted many children and adults with the view.  I love love love outreach.  I also put my camera on the tripod and ran around taking 4-8 second exposures of people looking through telescopes.  The only really good one I got was a posed one, since people tended to move.  But it was a fun experiment.  I may try flashing a light on them for part of the exposure so you can see both the people and the Milky Way behind them.  It was dark enough to make out the Milky Way that night, finally. 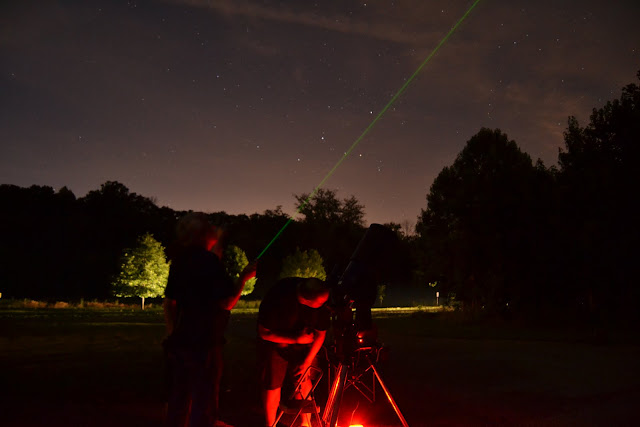 I worked on getting the guidescope working until about 1:30 AM.  The hardest part worked seamlessly – the camera talked to the computer, and the computer talked to the mount.  Even my test commands worked right the first time.  However, I didn’t quite get the camera going. I took a set of darks, but then the images were super grainy.  And I had no idea how to focus it, since defocused stars are too dim for cameras to see, as I’ve discovered with my DSLR.  But Will told me he drew a line on the focusing tube for where it should be, and that the noise will go away when it’s focused and has something to look at.  Then I just follow the procedure I found online for getting PHD going – it’s got its own built-in calibration process that measures how the telescope moves.  It takes about 5-10 minutes, according to the procedure.  So next time, I think I can get everything working.  And I’ll not use the Barlow to start with and see if the guiding is good enough despite the large difference in focal length and pixel size. 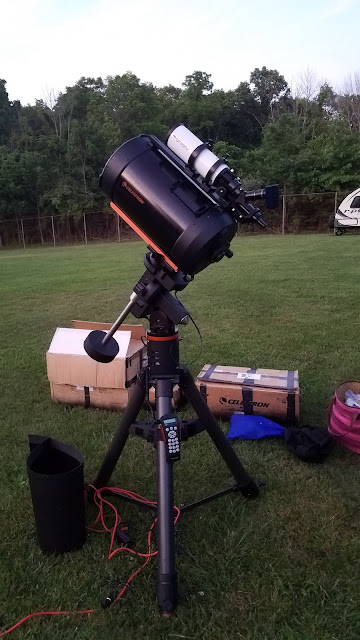 Celestron 11-inch SCT
Celestron CGE mount
Orion ST-80 guide scope
Since I couldn’t quite get the guide scope going, I shut it down and unplugged stuff, and just did unguided imaging instead.  I finally, finally got to image M20, the Trifid Nebula, on my own scope!  And it came out great! 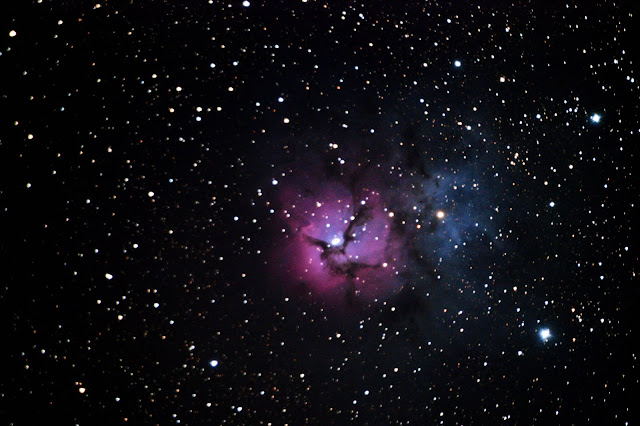 I enhanced the red a bit, since my DSLR isn’t IR-modified, but not too much.  I might mess with stylizing my images later.  I'm still figuring out Photoshop.  I’m pretty pleased!  Hopefully with guiding I can get more of the blue portion.
I was up late enough that I also did a set on the Andromeda galaxy.  This one will need guiding to get the finer detail with longer exposures.  I’m also planning on imaging it through the guidescope itself in the near future.  Will showed me one of his images through it of M31, and you can easily see M32 as well, there’s not really any color aberration (since it’s a doublet, so two colors are corrected), and the coma is definitely visible but not terrible.  He says they make field flatteners for small telescopes like that too.  So this still isn’t quite what I want, but it is very promising.  It’s a large improvement over the C8, since there’s no field rotation and I’ve got a larger FOV with the focal reducer.  I did have some severe problems with either collimation, heat current, or non-orthogonality of the camera chip, or something.  I did collimate it, and stars looked good in the eyepiece.  I might need to collimate it with the camera on instead, which will be more difficult because it’s awkward to look through the viewfinder. 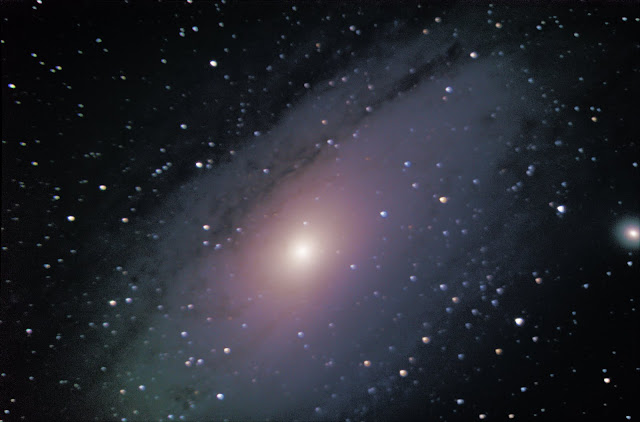 Another big improvement is I started using a 2-inch adapter for the camera, which attaches to the rear cell and not the visual back, as opposed to the 1.25” adapter I was using before.  I think the chip is bigger than the 1.25” adapter is.  It greatly reduced vignetting.  Below are the flats for comparison – left is the 1.25”, and right is the 2” adapter.

The reason why the right image is blue is because I used the sky rather than the LED spotlight on the battery to illuminate it.  I don’t think DSS cares whether the spectrum is white.  The histogram still had a nice central peak.  Part of the reason why my Trifid images came out so well I think is the less severe vignetting.  Even though DSS can correct for it, you can’t get the signal back that you lost in the first place.
Equipment fever is starting to hit me hard!  Can’t wait to save up for a nice CCD for DSOs.  Will definitely get the QHY5 soon as a guide camera and planetary imager.  Hopefully I can find one on sale on Astromart or CloudyNights before the Saturn and Mars set.  Jupiter is already gone.

Posted by AstronoMolly at 4:06 PM