It ended up being cloudy the rest of the long weekend, unfortunately, so I didn’t get to try my C11 again.  Instead, and since it was a week night, I set up the C8 in the front of my apartment and took some video on Saturn and Mars.  I was going to do Jupiter too, but by the time I was set up and had Jupiter centered, it had just started to dip behind the roof.  Darn.  I’m going to have to set up earlier or move to another spot if I want to get any more images of Jupiter before it sets for the year.  I haven’t finished processing all of my videos, but Saturn was looking excellent that night, especially visually.  With a 13mm lens and a 2x Barlow, the Cassini division was readily apparent, and I could make out some banding in the clouds. 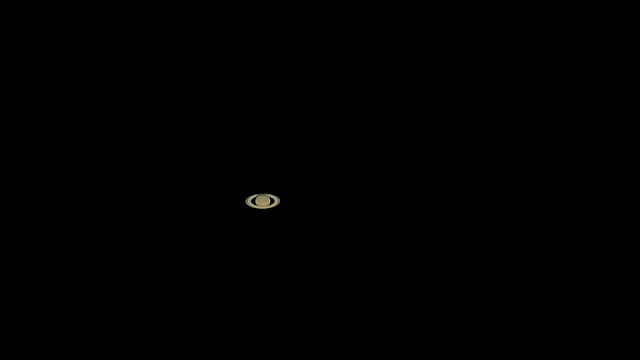 Saturn, Nikon D3100 on my C8, no focal reducer, 2x Barlow
12,203 frames stacked, unknown ISO and shutter speed
[You never need this many!!]
These are both easy to see in the image as well.  My mom commented that it looks like the rings are glowing.  Saturn is easily my favorite planet.  It is such a treat in the eyepiece, and comes out well in images too.
The C8 has been acting up a bit too – both at the county park the other night and on this outing, after moving the object I’m looking at, it continues moving for a bit after I let go of the button.  I don’t hear the gears move, and it’s much faster than normal backlash – as in, it’s faster than sidereal motion during the time that the slack in the gears is being taken up.  It’s also smoother than that, and it starts slow, gets fast, and then slows again.  In my head, I call it “drooping,” since it seems like the telescope is drooping after I slew it in order to cause this motion or something.  It only happens in altitude.  I haven’t yet determined which direction it happens in – the slew buttons switch direction for slower speeds and I can’t keep track – but if I recall correctly, the object (Jupiter in the west) would appear to move upward after I let go of which button I was pressing.  I tried adjusting the anti-backlash, but that ends up taking up too much slack and the object jumps around.  I’ll have to mess with it.  I suspect I’m not using the right final two movements during alignment – I have to check my notebook, since I can’t remember and it’s different than the C11.

Posted by AstronoMolly at 1:52 PM