I checked the evening forecast when it was clear earlier in the day, and it looked promising, so I used some award days off I'd earned to go do some astronomy and process some Chile photos.  One of my friends from the astronomy club, Rikk, gave me a Vixen 8-inch f/4 Newtonian in June, which I was very excited to try out!  It was a little heavier than my 8-inch SCT or my Takahashi, so it would also be an experiment for how well my Celestron AVX could handle it.

I loaded up the car with the scope, mount, ZWO ASI1600MM Pro camera, my tackle box of astro accessories, table, chair, tablet computer, and eyepiece case, and got out to the observatory around 8:15 PM.  I got everything assembled and balanced in not too much time.  I left the scope rotated up with the camera on top because I hadn't installed a finerscope/guidescope dovetail on the other side yet. 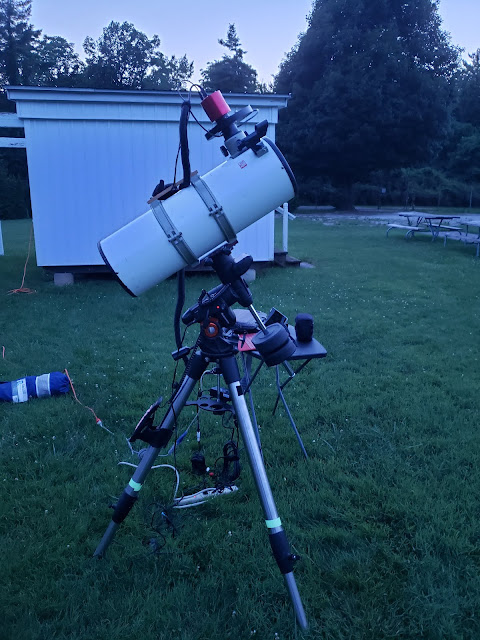 It may look front-heavy with the camera, but the primary mirror is where all the weight is in this telescope, so it balances out pretty closely.

I realized on the drive over that I had forgotten to grab a guidescope, so this would also be an experiment to see how long the mount could track for without guiding.  The focal length on this scope is 800mm, so not too long to catch every error, but not so short as to hide all of the error either.

Rikk said it probably needed some collimation, so I pulled out my laser collimator and hit up the internet to see what I needed to look for.  I looked down the tube, and the secondary seemed pretty close to the center of the primary, but the primary didn't have a center dot, so I couldn't tell for sure.  Shining the laser light down the tube through the eyepiece, I couldn't see the return dot on the collimator, but it might have already been in the very center.  I decided not to mess with it and I'd wiggle things around in daylight to see exactly where that spot was at.  But it seemed close enough, unless the dot was all the way off of the collimator or something.  But I could see my eyeball in the secondary when I looked through the empty eyepiece tube, so I took that as a good sign.

Another thing I realized I forgot was the power cable to my mount...things are still mixed up after the Texas Star Party.  Luckily, the club owns a couple of Celestron mounts, so I borrowed one of the power cables from those.  It was still pretty bright out by the time I finished putting everything together, but Jupiter was readily visible in the twilight, so I slewed over there to check whether I could achieve focus.  First, however, I needed to align the finderscope, so I pointed it at a distinctive treetop, got the image centered in the camera's view on my computer, and adjusted the finderscope to match.  Then I could find Jupiter.  Once there, I was able to achieve focus!  Better yet, the focuser was racked pretty far out, which meant that I had a good amount of backfocus to play with as far as adding additional accessories in the future, like an off-axis guider, better focuser, or rotator.

I slewed back to the home position and started polar alignment using SharpCap, which went smoothly.  Alignment went pretty well as well, with each star plopping into the field-of-view on the first guess.  Always a great start to an evening! 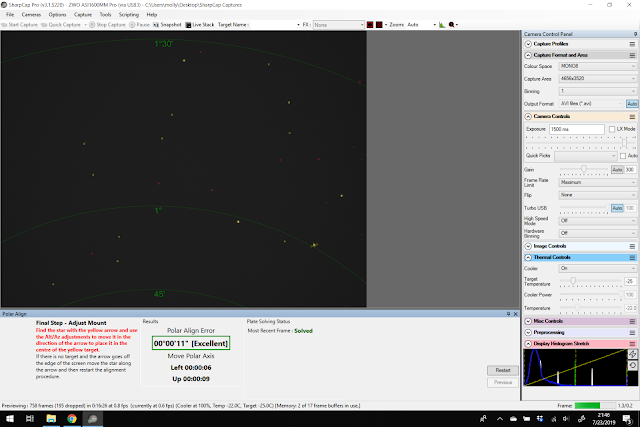 It was still pretty light outside when I was done setting up, but Jupiter was shining bright in the twilight, so I slewed over there to get focused.  I realized that the finderscope wasn't even close to aligned, so I slewed over to a distinctive tree and looked at the camera image on my tablet to get the finderscope aligned.  Once that was done, it was easy to find Jupiter, and I was able to achieve focus!  Better yet, I had to rack the focuser pretty far out, which meant that I had a good amount of distance to be able to add other things in the future, like a better focuser (or an electronic one), an off-axis guider, or a rotator.

I slewed back to the home position to do the polar alignment, which went smoothly.  Then I went through the alignment routine, which placed all of the stars in the field-of-view of the camera, woot!  Makes my life easier, and it's a good sign that the mount is going to cooperate that night.

With alignment complete, it was time to choose a target.  I had a number of criteria to consider: it couldn't be too small, but I also didn't want one that would fill up a large amount of the FOV, since I saw that there was some vignetting, and I wasn't sure about the collimation.  (I did have a coma corrector on too, by the way).  I wanted something bright that I could expose for 30s or less, since I didn't have a guidescope, but I also didn't want something I already had a good image of already -- with a clear night, I wanted some new images!  There were a few galaxies westward that would make good targets, but that's right in the thick of the light pollution from the nearby city.  I thought about doing the Cocoon Nebula, since I haven't imaged it with my monochrome astro camera yet, but I knew I wouldn't get a whole lot of signal in the blue and green, and wanted to do longer exposure times for that one, especially to get a good view of the dark nebula.  I finally settled on the Iris Nebula, which was well-positioned, bright, and I didn't have a good image of it yet.  Bonus, the bright star in the middle would be really pretty with diffraction spikes :D  One of the things I'm really looking forward to with a Newtonian.

I took some test shots, and at 60s, the stars were nice and round!  My little AVX was still performing great.  This was really exciting.  On the left part of the image, the stars had a bit more of a donut-shape to them, so I figured this must be an effect of non-perfect collimation.  I tried for 120s, but the stars showed some stretching, so I dropped to 90s.  Some frames showed periodic error, but several were good, so I went ahead and pressed with that. 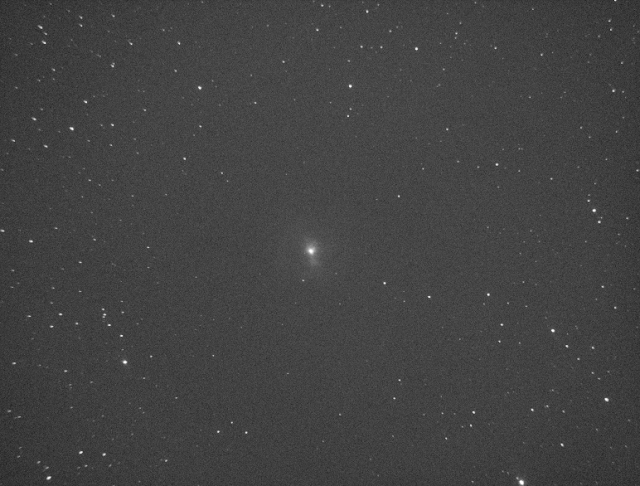 I set up my SequenceGenerator Pro sequence for 2.5 hours of LRGB imaging, and it was 10:30 PM by the time I started the script.  The sky was clear and had good transparency -- I could see quite a few stars.  There was so much light pollution though compared to Chile!  I missed it already!  The temperature was very nice, only requiring a light jacket, and there was no wind at all.  However, the humidity was really high!  Luckily, it takes quite a lot to dew up a Newtonian, and I didn't get any dew that night.

I hung out inside on my laptop, and then went back out at 1:15 to go pack up.  The moon was just rising in the east, still behind the trees.  Some clouds had rolled in though, including over my target!  So I'd have to see how many frames I'd get from the green and blue channels, which ran last.  I left the observatory around 1:45 AM, and enjoyed a gorgeous yellow-brown half-moon on the drive home.  A successful night!

I actually got this image processed on July 25th, but I was still getting caught up on blog posts from Chile, and I haven't had time to finish this one during my move to California.  It came out fairly noisy due to low numbers of subframes, but otherwise surprisingly decent! 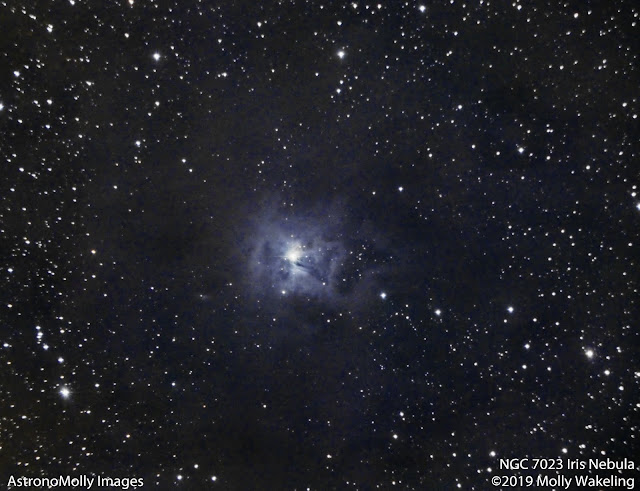 The Iris Nebula, or NGC 7023, is a bright reflection nebula, where a star is surrounded by gas and dust, some of which reflects the light of the star.  The star in question is magnitude +7 star SAO 19158, which is actually a double star, whose companion is +13.4 magnitude and lies 2.3 arcseconds away, or 1,220 astronomical units (Earth-Sun distance), from the brighter star.  The nebula lies 1,300 lightyears from us in the constellation Cepheus, and spans 6 lightyears.

Looking forward to more from this scope!

Table of Contents
Posted by AstronoMolly at 7:05 PM