On long-focal-length telescopes like Schmidt-Cassegrains (and especially Schmidt-Cassegrains, with their floppy mirrors), off-axis guiding can provide better guiding than a guide scope.  I've been using an off-axis guider with my C8 since 2018, and despite some troubles, it has still largely been a better solution than when I was using a guide scope.

I initially paired it with my QHY5 (the original red puck), but found it to be not sensitive enough to pick up guide stars, even at f/6.3 (1280mm).  I picked up the more-sensitive QHY5L-II CMOS guide camera not long after, which typically gets just barely enough signal-to-noise ratio to hold onto a guide star on my setup.  Of course, it performs better under dark skies, but any drop in transparency, and I'm barely holding onto a star, especially in the spring when the density of stars around out-of-galactic-plane targets tends to be a lot lower. 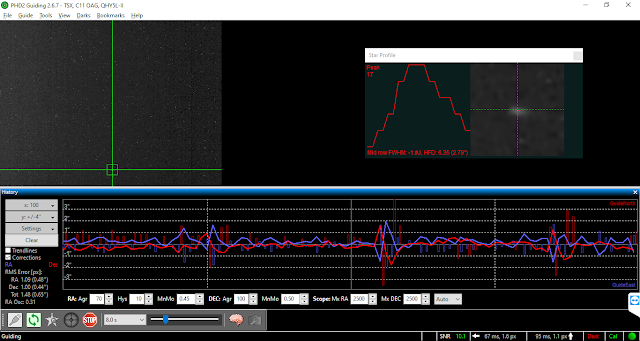 A good night of guiding in February...just enough SNR to hold onto the star.
While the QHY5L-II worked more often than not for me, I started growing tired of losing images because of lost guide stars, and losing hours of the night while Sequence Generator Pro made attempts to recover.  So I've been kicking around the idea of getting a Lodestar, which is a tiny CCD camera made by Starlight Xpress with big juicy pixels and high sensitivity.  The current iteration of this camera is the Lodestar Pro, which was 8.6 micron pixels and 77% quantum efficiency.  Unfortunately, it costs almost $600, which is a bit hard for me to justify when my system mostly works.
However, I recently came across a used original-model Lodestar being sold by an area astronomy club member, so I pounced on it (along with an enormous 315mm electroluminescent flat panel and a network-enabled sky-quality meter).  The older version of the Lodestar has 8.4 micron pixels and 65% quantum efficiency, so not a huge difference technically (several other specs are the same as well), although the read noise is lower in the new version.
The first thing to do was to make sure it would talk to my laptop.  I installed the ASCOM driver for it, connected it to SharpCap, and it started taking frames right away.  Woot!  Shining light on it showed a response.

The next challenge was getting it on the off-axis guider.  This is an event.  Getting it focused is not easy.  You have the three-fold problem of not being in focus, not having a star in the field bright enough to show up when very unfocused, and it's very hard to tell where the OAG is looking to get a star placed in it.

The first night I tried it, Wednesday, didn't go well at all.  There were low clouds running across the sky, and once I got a bright star in my main camera and started slewing around to see if it would show up as a big unfocused blob in the guide camera, a cloud would inevitably cover the star.  I gave up that night and went to bed.

Saturday night was much better, and had better transparency.  Bonus points, the waxing crescent Moon was high enough above my lemon tree to see with my C8.  A super-bright object is a lot easier to land in the guide camera because you can see it coming from off the edge.  I slewed the scope over to the Moon, centered and synced it in the main camera, and then slewed above and below the main camera image to see where it would show up in my guide camera.  Pretty quickly I could start to see the guide camera image lighting up, so I adjusted the exposure time down for seeing the Moon's surface, and got the guide camera roughly focused.  I also created a field-of-view indicator element in TheSkyX where the Moon was in my guide camera compared to the main camera so that I could more easily land a star inside of it. 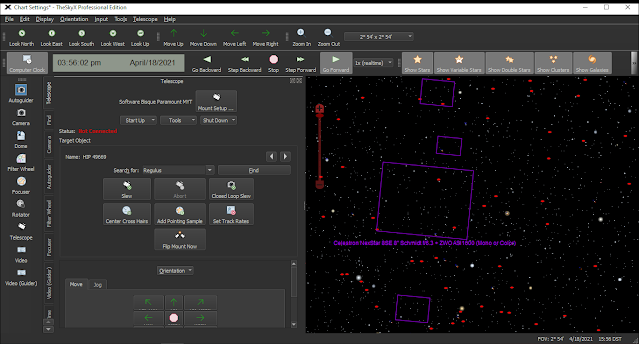 The center rectangle is the main camera; the smaller one above is my old guide camera; the rectangles above and below are the E and W side of the pier positions of the guide camera, respectively.

Next, I slewed the main camera to Regulus and centered it, synced the mount to it (so that it would be in the correct position with respect to my camera FOVs on the map), and then slewed the mount so that Regulus would show up inside the guide camera box.  And bang, there it was!  Now time to critically-focus.

Now, I use two different brands of filters: Astronomik CLS-CCD & RGB, and Chroma narrowband filters.  They have different thicknesses, and thus adjust the main camera's exact focus point a bit.  ("A bit" on my PrimaLuce Esatto focuser is still like 20,000 steps).  So to set the guide camera position so that it's mostly in focus for both focus points of the two sets of filters, I take the CLS-CCD filter's in-focus point and the H-alpha filter's focus point and split the difference.  I set the focuser there in the middle of the two, and then moved the camera in and out until the star was as small as it would get.  Now, since we're so far off-axis and this is a Schmidt-Cassegrain, the star shapes are pretttttyyyy yucky, so "in focus" is hard to determine.  But I got it about as small as it would appear in the camera, and called it good.

Unfortunately, that focus point has the Lodestar just barely inside the tube!  I put on a C-mount extension tube, but it has a lip on it that won't let me insert it far enough to get the camera in focus.  So I need to hunt down an extension tube that doesn't have a lip.  We'll see if I can find one. 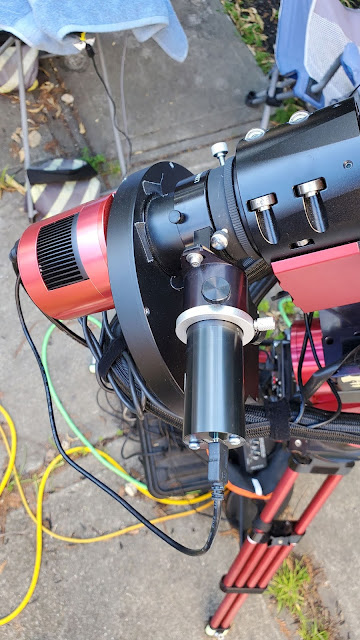 Next, I needed to re-calibrate guiding in PHD2 for the new camera.  I slewed the scope to somewhere roughly due East and about 50 degrees up the sky and started looping 8s exposures.  Now, I had already discovered during initial connection testing that this Lodestar has a lot of hot pixels.  And because of the way the camera is read out, some kind of interlacing to increase the speed, the hot pixels really look rather star-like.  I did try to take a dark library in PHD, but they never work for me -- they always over-subtract, and I end up with a bright gray image with black specs where the noise pixels used to be.  However, this is one place where the gross shape of the stars off-axis in a Schmidt-Cassegrain actually works out in my favor: they're way bigger than the hot pixels.  After some trial and error, I set the HFD (half-flux diameter) minimum value in the settings (brain icon) to be 3 pixels, and this did the trick.  PHD grabbed what appeared to be dim, blobby stars rather than the star-like noise pixels.
The hot pixels really mess with PHD's auto-stretching algorithm, so I could barely even see the guide star.  However, your ability to see it isn't what matters -- only PHD's ability to see it.  This is given by the SNR (signal-to-noise ratio) reading.  The higher the value, the better (until it says "SAT" which means you're saturated, which diminishes PHD's ability to calculate the centroid of the star).  While I have been used to values between 5-20 on the QHY5L-II, the Lodestar showed values of 50-90, even in star-poor galaxy regions! 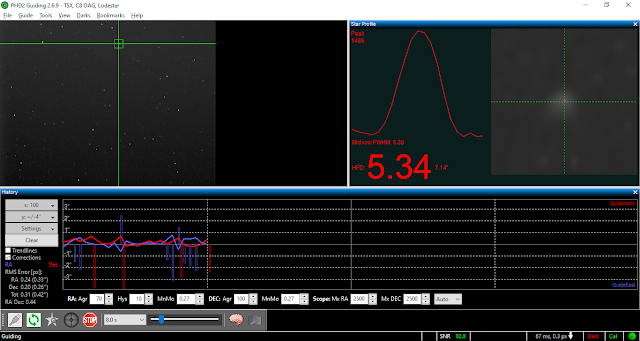 This was very exciting and very promising indeed.  So I got the main camera cooled and started running the sequence for the C8 for that night, which consisted of planetary nebula Abell 31, planetary nebula Sh2-313 (Abell 35), galaxy NGC 5248, and M16 Eagle Nebula.  Abell 31 had some initial trouble with the guide star wandering off, but it was almost behind the tree anyway, so I had SGP just advance to the next target.  Despite Sh2-313 being really low in the south for me, the PHD2 screenshot above was taken there, showing good SNR even through muddy and light-polluted skies.
The rest of the night was quite successful -- all of my targets ran and got a lot of subframes, and it looks like the night finished strong with M16, which is in an area with plentiful bright stars to choose from. 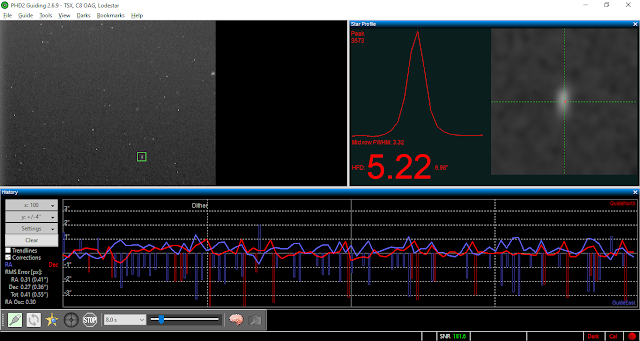 0.55 arcsec RMS guiding is pretttty good :D  And so is that SNR and star profile! 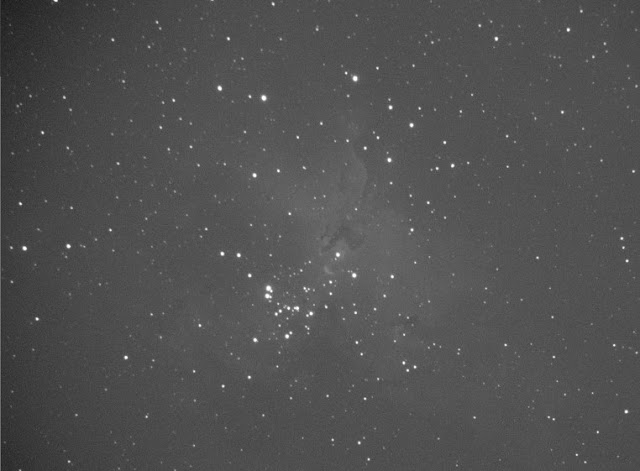