This morning, I was only able to sleep in until 10:30 -- it was too warm inside, and I became worried about whether the cameras I had left running on my Sky-Watcher Star Adventurer would have moved far enough to hit the mount or something.  So I got up and went to check -- all was well.  I shut off the power, put the batteries on their chargers, and grabbed my Nikon D5300 off of the mount for use later in the day on our adventures.

We tried again to visit the Valle de la Luna, this time arriving before 1 PM.  It was a beautiful park for not having a single living plant! 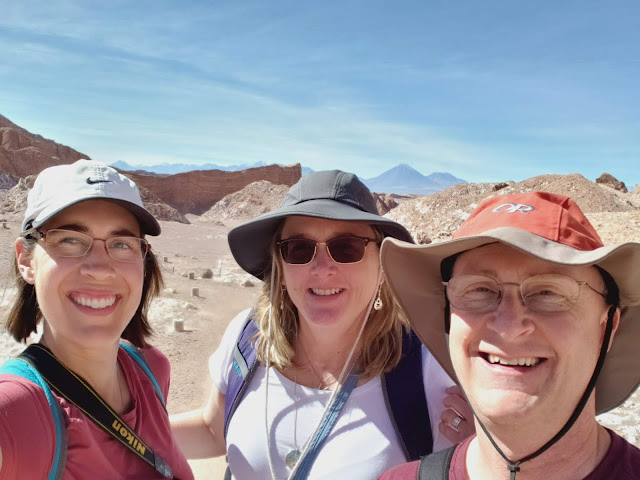 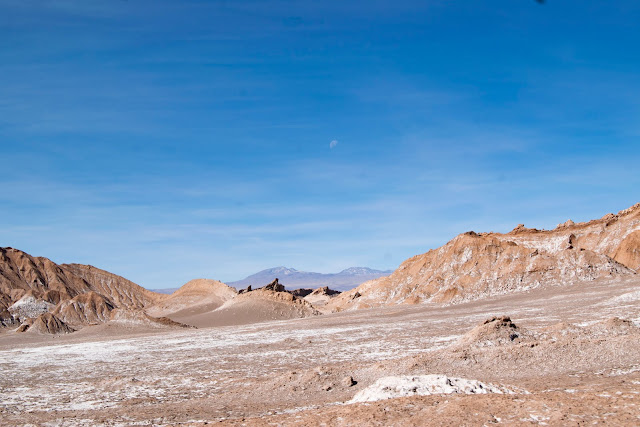 The moon over the Valley of the Moon!

One of the stops along the way was to a hiking trail that went up to the top of some part-sand dune, part-rock hilltops, as high as 8400 feet above sea level!  By the time we got to the top (after several stops to rest), it felt like I had just run a 5k!  But the view was incredible, and standing on a particularly tall rock made me feel like I was standing on top of the world. 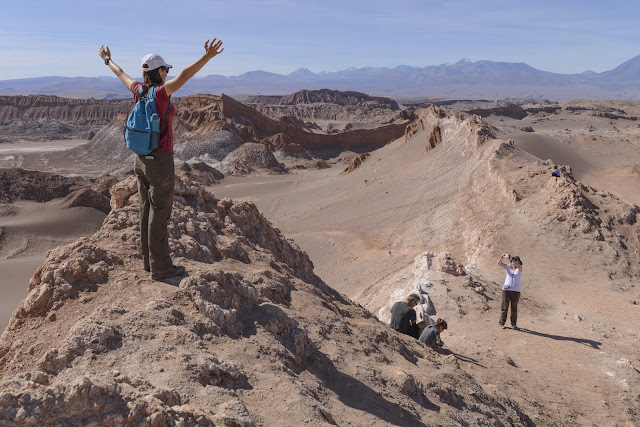 We hit a few more stops along the way, including some old salt mines. 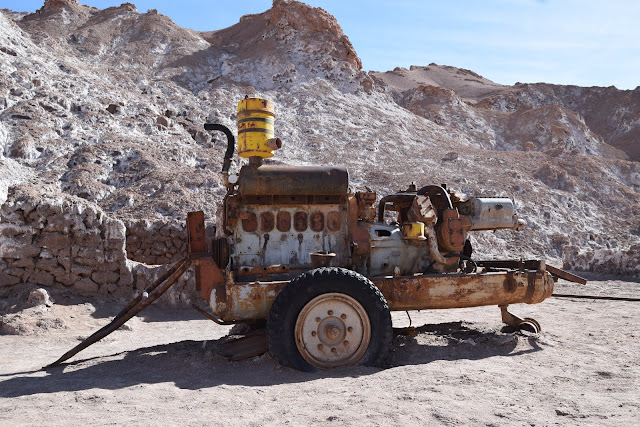 All of the white stuff in the rocks is salt.

At the end of the road was the Tres Marias rock monument, which was really cool looking.  I had to wonder how it was formed! 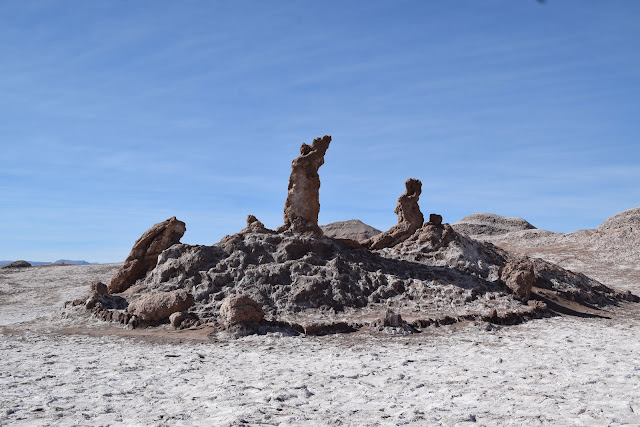 The miners would pray here for safety.

On the way back to the Atacama Lodge, we stopped for gas in San Pedro de Atacama, at their one Copec gas station that was in a really weird and rather hard-to-find spot.  It also had a long line.  We decided to wander around town for a bit and hit up some ice cream and pick up some gifts.  We also walked through a really old church that was built sometime before 1557!  The ceiling was made of dried cactus, which was really cool. 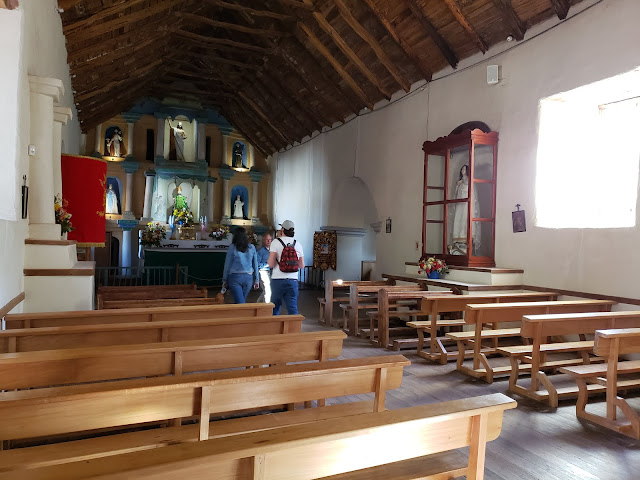 We drove back to the Atacama Lodge and watched the sun set. I set up my Nikon D3100 to do a day-to-night timelapse, and I got the cameras booted up on my Sky-Watcher Star Adventurer.  I pointed the Sony a7s with the Rokinon 135mm f/2 lens I was borrowing from the owner of the Atacama Lodge, Alain, over to the Rho Ophiuchi complex, which I've tried to image several times from various locations with varying levels of success.  I had to position the camera carefully so that I wouldn't pick up Jupiter's camera-saturating glow.

Also attached to the Star Adveturer was my Nikon D5300 with my 70-300mm lens, and I was going to do M16 & M17 up in Sagittarius.  However, it was too close to where the Sony was pointed, and the cameras were hitting each other.  So I just picked a spot further south in the Milky Way and figured I'd see at least something interesting there.

Once that was all set up, I went back to the cabin to have some dinner (leftovers we were trying to finish off), and I got my stuff most of the way packed up for departing Chile the next day.  :(  I went to bed at 9:45, and the plan was to sleep till 2, get up and do some observing, and hit the road by about 4:45 to drive to Calama to catch our flight out.

At 2 AM, I dragged myself out of bed, got dressed, and finished packing.  I went up to the rolloff shed and packed up my cameras and Star Adventurer as well, and then went and joined my travel companions John and Beth at the telescopes.  Alain was just putting the finishing touches on a behemoth 45-inch Dobsonian he'd spent the last few years building, and we were hoping to get first light through it!  We helped him collimate it, although we couldn't quite reach collimation -- he would need to move the focuser hole inward a bit toward the primary (a task he'd set about doing soon).  But it was close enough for first light.  We brought the tall ladder over, and with each of us taking turns holding up the scope since the counterweights weren't quite right yet, we turned it to the obvious choice of first-light targets: the incredible Tarantula Nebula, in the Large Magellanic Cloud.  The stars weren't quite pinpoint because of being not quite in collimation, but what a view! 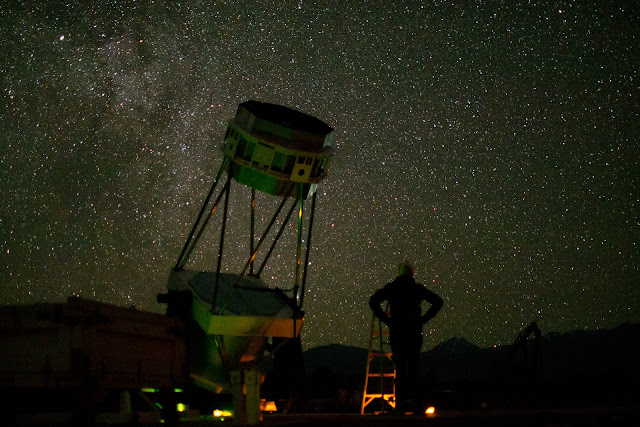 Now we can say that we got to experience first light on the largest telescope in South America for use by amateurs!  :D  We also took a look at 47 Tucanae, the giant globular cluster.  I wish we could have seen that with this thing collimated!  Oh well, next time :)

We got the car loaded up, bid farewell to Alain, and drove an hour up to Calama, where we would fly out to Santiago.  Then my flight back to the states was later that night, at 8 PM.  The plan was to run around Santiago for a few hours, and then I would head to the airport to catch my flight home.  Due to a miscommunication, John and Beth's flight was the next day, but I was glad to be leaving earlier.  I was ready to head home!

All in all, Chile was an incredible adventure, and I had a great time.  The solar eclipse and the incredible dark, clear skies at the Atacama Lodge were obviously the highlights of the trip!  I had 21 deep sky datasets to process when I got home, plus numerous timelapse videos and single-frame nightscapes.  Not to mention all of the awesome daytime photos of all of our other adventures!  I also got to do a ton of visual observing, which was really rewarding, especially because things weren't just dim fuzzies, but really exciting to look at under those skies!

I'll definitely have to go back!

I got the Rho Ophiuchi image processed, and HOLY COW did it come out well! 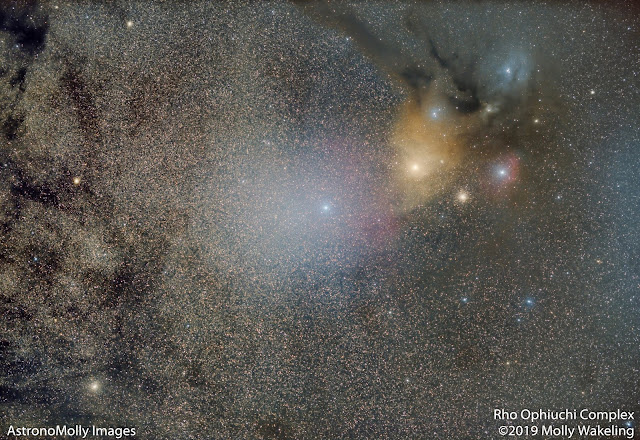 Yes, that is only a half-hour of data! :O This image was really exciting to process. I literally got tears in my eyes a bit when it emerged from DynamicBackgroundExtraction. Here's why...

I wasn't sure how much of the nebula was really there with those short exposures, but the Sony a7s is so dang sensitive that I couldn't go much longer without saturating. It turned out to be just right! And I finally got some of that brown color in the dark nebula that I've seen others get but hadn't been able to achieve myself.

The first version of this one didn't come out quite as nice. 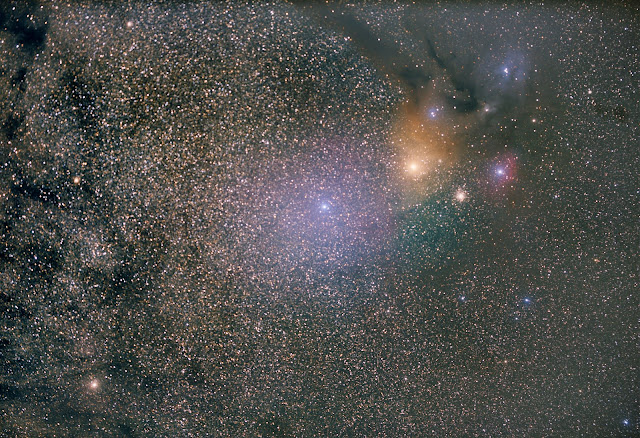 The stars got fatter, and the nebula regions weren't as well-defined. The main reason for this was that the focus slipped on the lens not very far into the run, but I tried stacking them all anyway for the sake of SNR. With all of the frames, I had 324x30s, or 2h42m of data. But then I decided to see how it would look with the much smaller number of in-focus frames -- only 58. The result was much better, and the SNR didn't seem to suffer (the lack of light pollution helped, and the apparently low noise of the Sony camera).

Another thing I tried was a new PixInsight process for me -- MaskedStretch. I went looking through Warren Keller's book Inside PixInsight for a section on processing dark nebulae that someone mentioned to me was in there, but wasn't able to find it (at least, not with a couple of quick looks). So I just looked through the section on stretching, and decided to give it a try. It performs a series of stretches, and the end result has the peak of the histogram exactly between the black point and the gray point. Since none of the peak was pushed past these two points, the image was still somewhat dim, so I brought it into CurvesTransformation and brightened it up from there. Then I did a few more steps, and got an end result I was very pleased with!

So happy with this one! And a great example of what powerful post-processing does for you.

My random positioning of my 70-300mm lens at 70mm pulled in a nice area of the Milky Way! Included in the scene are M8 Lagoon Nebula and M20 Trifid Nebula, M6 Butterfly Cluster, M7 Ptolemy's Cluster, the Pipe Bowl dark nebula, and more. Also, in one of the frames, I caught a nice meteor! So after processing the image the first time, I took the stacked image, added the single frame with the meteor to it using PixelMath (I'm sure there's a more elegant way to do this), and then applied the same processing steps (mostly). It came out nice! Even though there was a lot of moon in the background in the subframes. 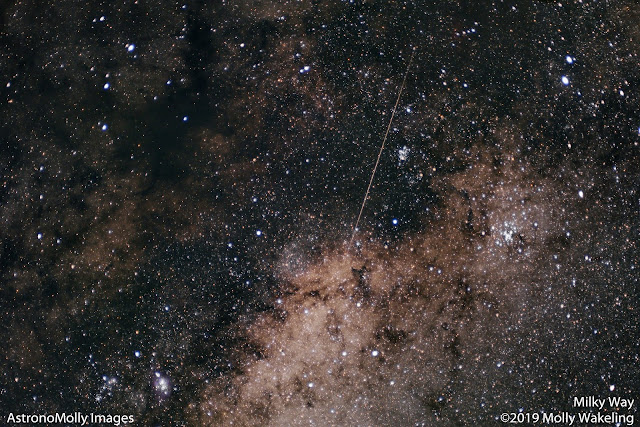 I tried MaskedStretch on this one too, but it blew out the blue halos around the stars from the slight chromatic aberration of the lens, so I did the stretch myself in HistogramTransformation instead. I still got some blue halos, but not as bad. Then I took it over into Photoshop and used one of Noel Carboni's Astronomy Tools for Photoshop to reduce the blue halos.

Table of Contents
Posted by AstronoMolly at 5:58 AM