With the movers coming on Monday to pack up my house for my move to California to start my PhD at UC Berkeley, I attended my last member's night with my astronomy club.  There was a pretty good turnout of about 20 people, along with a few who were camping on that nice weekend in trailers.  The forecast was iffy on the cloud situation, meaning that there would probably be some high-altitude scuzzy stuff.  Sounded like a perfect night to test out a new camera! 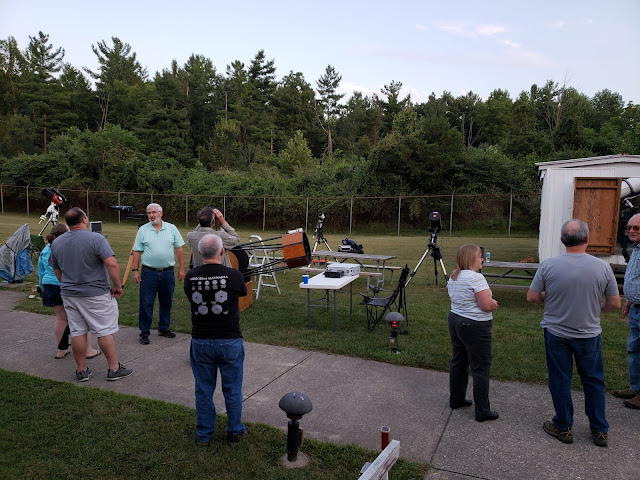 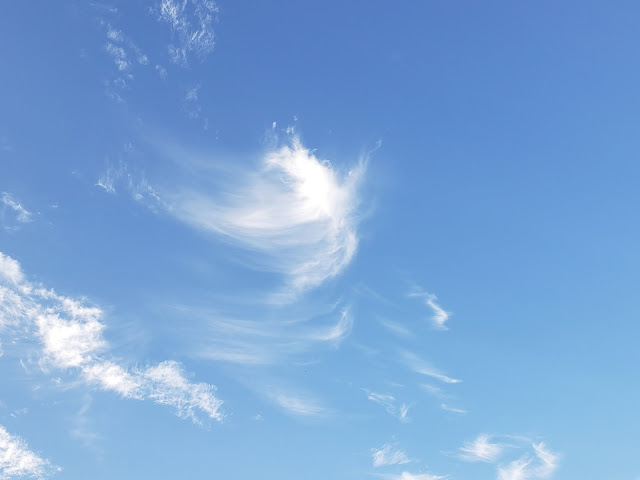 At least the clouds were pretty!

I didn't feel like bringing all of my gear, especially for an iffy forecast, so I planned on using one of the club's telescopes: an 8-inch Celestron Schmidt-Cassegrain on a Celestron CG-5 mount.  The new camera was one that my astro-friend John had very generously given to me recently: a ZWO ASI294MC Pro. It's the successor to my ASI1600MM Pro, but the color version. I had planned on buying the color version of my monochrome camera at some point for outreach events, transient phenomena (comets, Jupiter shadow transits, etc), and short nights, but now I have one much sooner! It would be a good night to test it anyway since I didn't have a way to mount my guidescope on the C8, so I'd just do short exposures until the cloud situation became unfavorable. 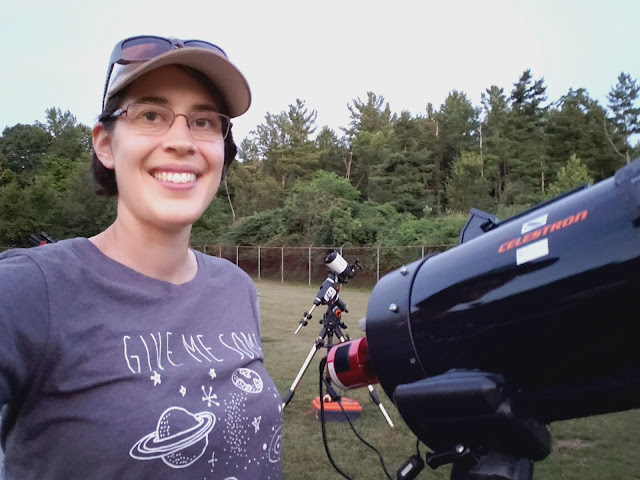 After some potluck dinner (theme: "Pies & Pints," for which I brought an apple pie), the thin crescent moon was setting in the west, and I grabbed some video on it before it dipped below the trees.  As I was prepping to move to Jupiter, someone spotted a weather balloon, and I just caught a glimpse of it in our 16-inch Dob!  But it had dropped its payload, separated, and deflated before I got my telescope over in its direction.  Darn, so close!  (And a perfect application for a one-shot color camera!) 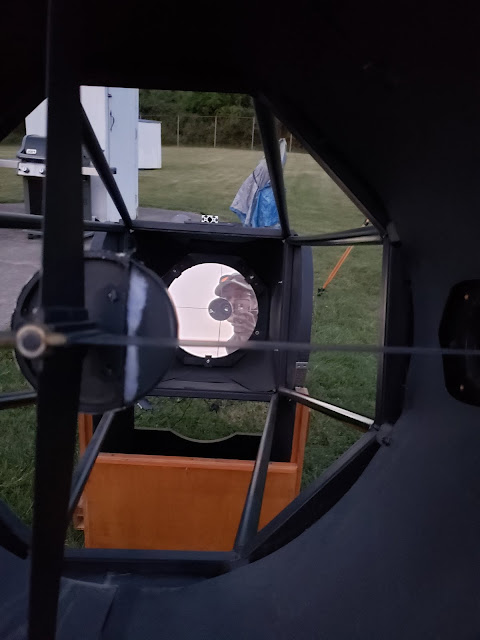 I also enjoyed some yummy cake that some of my astro-friends got for me! 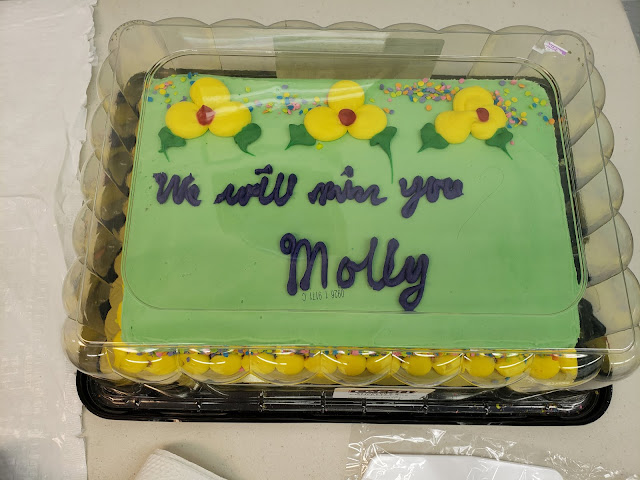 Having missed the weather balloon, but it not being quite dark yet, I imaged Jupiter and Saturn.  The atmosphere wasn't that great, however, so I'll have to see how those come out.

I didn't end up doing any deep sky imaging, but I did observe a dim M22 globular cluster, as well as M13, through the Dob.  I hung around until 11:15 PM, and then packed up and bid farewell to many of my astro-buddies.  It was a bittersweet goodbye, but we will be sure to stay in touch on social media.  I will miss them all dearly!

It has seriously been one heck of a ride so far.  After going it on my own for about 6 months after I got my first telescope in July 2015, a friend in the local astronomy club convinced me to check it out, so I went to a members night with him in February 2016, and joined the club shortly thereafter.  It was at that members night that my uncle messaged me asking if I would be interested in his Celestron computerized German equatorial mount and 11-inch Schmidt-Cassegrain, which really upped my game in astrophotography, especially once I figured out how to guide.  I also got to use a lot of astronomy club equipment, in addition to the awesome observatory facility we have (and really under-use!).  Many of my favorite images were taken on club equipment! Many club members gave me advice, tips, and even equipment, and even more gave me encouragement and friendship.  I cannot thank enough the many people in that club who have helped me along the way!

Clear skies, and I hope to catch you at the next star party!  (And don't worry, I've already found the astronomy club of the East Bay area!)

I said up above that I didn't do any deep sky imaging, but when I was working on my tablet yesterday, I found a folder of images of M20 Trifid Nebula that I had taken that night and forgot about!  I had to delete quite a few due to periodic tracking error and clouds, but I still managed to get a reasonable image out of the frames I did have. 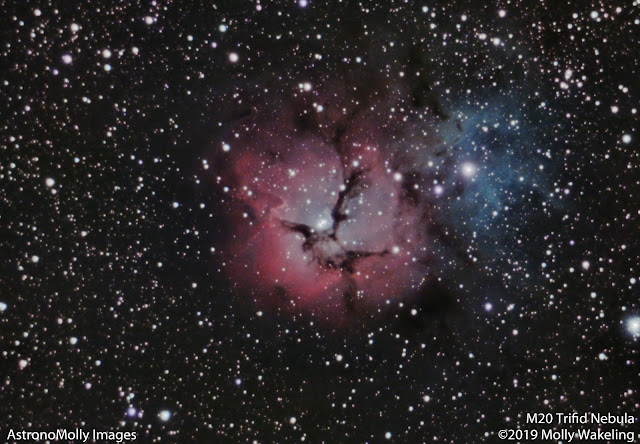 So when I went to process this, I ran into a problem pretty early on while trying to debayer.  The Bayer matrix pattern was not written into the FITS header, so PixInsight couldn't figure it out automatically.  The internet said it was RGGB, but when I tried that, I got a bright blue mess! 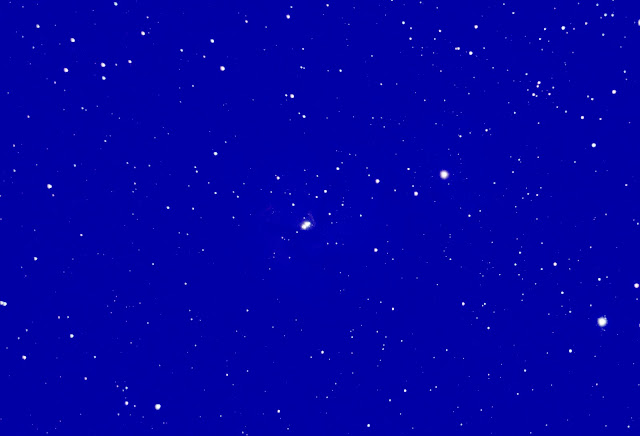 Now, I am pretty used to having weird color casts over images from one-shot color cameras, but they're usually green, and usually you can still see the object.  I thought that maybe RGGB was actually wrong then, so I tried every other option.  Some gave a green cast and looked almost normal, but when I zoomed in, I could see the pixel pattern, which told me it wasn't right.  Finally, I decided just to see what happened when I used RGGB and then ran PhotometricColorCalibration.  This yielded a correct-looking result after all.  I then discovered after doing some forum searching that sometimes you have to unlink the RGB channels in the auto-stretch process ScreenTransferFunction, and when I did that, then the colors appeared normal.  Very strange!  The rest of the processing went smoothly.

Since I don't have any calibration frames for this camera yet, and I didn't have a large number of exposures, the image turned out quite noisy.  I had to run MultiscaleLinearTransform twice and ACDNR once to get the noise down, but they did a pretty good job.

Table of Contents
Posted by AstronoMolly at 1:38 PM