For the last three years, I have averaged 50 nights of outreach per year.  I almost made the mark again in my fourth year -- hit my 200th astronomy night just two weeks after my fourth anniversary of amateur astronomy!  Still going strong :D  Of course, many clear nights at the Texas Star Party and in Chile helped.  We had a lot of clouds this past year in my Midwestern home location.

For my 200th astronomy night, I did an outreach event at a county park about a half hour from my house, where I've done a few other outreach events and talks.  The movers were coming on Monday to pack up my stuff for my move to California (I'm starting my PhD at UC Berkeley!), and they offered to come Friday, but I said come Monday and Tuesday instead! This let me still have the mount on my outreach telescope, my Celestron NexStar 8SE.  (My plan was to take the telescopes with me in my car, and let the movers take all my mounts).

I was really glad I had my outreach scope because there were a ton of people there!  It was largely an event for kids, and there were about 30 people or so there total.  We had two other astronomy club members present with telescopes as well, but we each still had lines to look through them.  Several other club members came out without telescopes to support.

First, I pointed my scope to the thin crescent moon that was sinking into the west, which was quite beautiful both with and without the telescope.  We got a little bit of earthshine on the darkened portion before it set.  I didn't have my DSLR, or else I would have grabbed some shots!  Next, I pointed it to Jupiter, which had the Great Red Spot for about twenty minutes before it slid around the  back of the planet, and then I moved over to the crowd-pleaser and personal favorite: Saturn.  It's always an absolute delight in my 8-inch, and despite some waviness from the primary mirror still cooling off, it did not disappoint!

At one point, a young girl (maybe about 9 or 10?) was over at my compatriot Phil's scope, and he was telling her about how the computer-driven mount worked.  She said she wanted to be an astronomer, which of course was very exciting.  When Phil gave a command for the scope to slew somewhere, her jaw positively dropped!  It was a lot of fun.  I let her control my scope later, and answered some questions about black holes and other space things.  I told her about the Event Horizon Telescope after I showed her the recent radio-wavelength image of the black hole at the center of galaxy M87, and about the incredible resolution of the effectively-Earth-sized telescope (achieved through advanced interferometric processing algorithms).  The resolution of this telescope collaboration would be equivalent to imaging an apple on the Moon, or reading a paper in New York from a cafe in Paris! 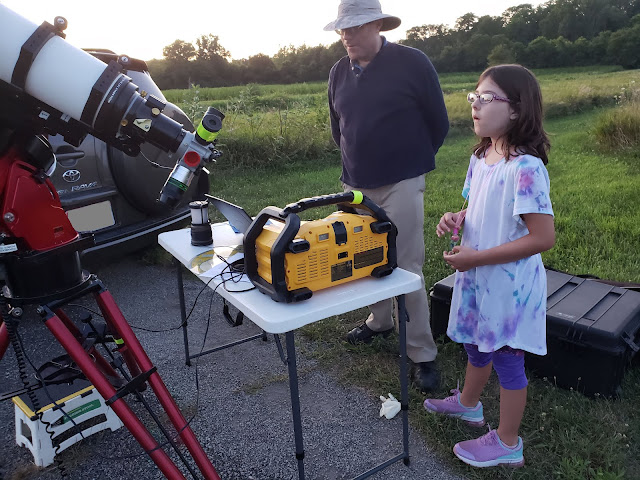 I missed the moment of maximum jaw droppage, but she was very impressed!

After the last few people left around 10:30 PM, I set up my ZWO ASI1600MM Pro with my electronic filter wheel onto my 8-inch, including the IR photometric filter I had recently added to the previously empty slot.  The seeing turned out better that night than expected, and I got some very nice results of Jupiter and Saturn!  I've only processed Saturn so far,  but I'll put up Jupiter when I get to it. 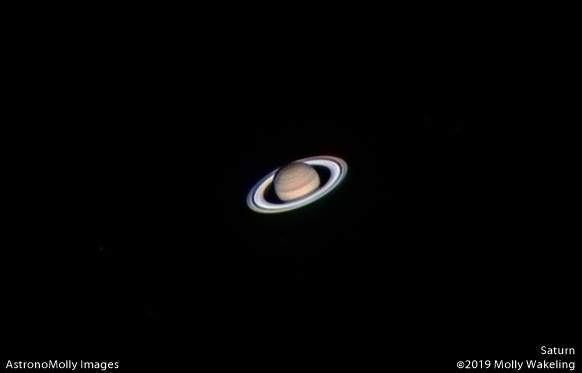 It's quite small in the field-of-view of my camera, so this is cropped quite heavily, so I don't have great resolution (pixels) on it.  But when I eventually live somewhere where the seeing conditions are good enough to support using a Barlow or eyepiece projection, I definitely will do that!

I love outreach events!  They give me so much energy and joy :D

Posted by AstronoMolly at 10:34 PM