On Monday night, my astronomy club held a late-season stargaze at a local school out in the back parking lot.  Despite relatively chilly temperatures in the upper 40s, there was an excellent turnout of about 100 people!  Mostly families with a wide variety of ages of kids.

I brought my usual outreach rig - my Celestron 8-inch Schmidt-Cassegrain on its Celestron NexStar SE mount, as well as my Celestron eyepiece kit.  I also brought my Oberwerk binoculars, but ended up not having time to set them up!  I forgot my stepstool, but I can reach the height of most kids simply by rotating the mirror diagonal down toward the ground and having them come around the side.  Then I can rotate it back up for the parents.

Since most of the shorter focal length scopes belonging to my compatriots were focused on Saturn (Dobsonians and refractors), I slewed my scope to Mars (the automated robotic slewing always has the kids delighted at how cool that is) since the 2,032 mm of focal length of that little orange tube can make Mars an appreciable diameter at the eyepiece.  Coupled with a 13mm eyepiece, you could see it as a nice, bright, reddish-orange disk.  When the seeing was good, you could just make out the southern polar ice cap.  This eyepiece also has some chromatic aberration, so the right edge looked bluish as well.  For the many folks whose first time it was seeing another planet through a telescope, though, that hardly matters.  Especially not to the young girl who excitedly declared after coming back for seconds, "I want to be just like you!" 💕

Since transparency was excellent and seeing was decent, I decided to try out my newest camera, an itty bitty Celestron NexImage 5MP color planetary imager I won at the Hidden Hollow Star Party.  I'd installed the software and tested it (just by shining light on it) in SharpCap last week, so it was ready to rock and roll.  When I cropped the image size to 1024x768, it was pretty speedy for USB 2.0 - a cool 27 fps average.  Not the blazing speeds of my ZWO ASI1600MM Pro with its USB 3.0 running at an 800x600 crop clocking in at 100+, but fast enough to be legal on most side streets.  I took one video on Saturn of 2,000 frames, and one on Mars.

As fast as the image collection was, however, RegiStax had a bear of a time dealing with that data.  I recorded in my usual SER format, which RegiStax has seemed to favor, but its debayering method for handling one-shot color data is apparently very slow.  Every time I scrolled a frame, I saw the sparser monochrome images first before they resolved into the color frame as the debayering was accomplished.  With my monochrome images, aligning and stacking takes a total of about 3 minutes top to bottom for each color channel.  These videos took over a half hour each to align and stack.

And then, it came out green!  Not only that, but you can see the pixel pattern - basically it looks like all of the red and blue pixels were just eliminated, leaving the green pixel array and a bunch of empty spaces. 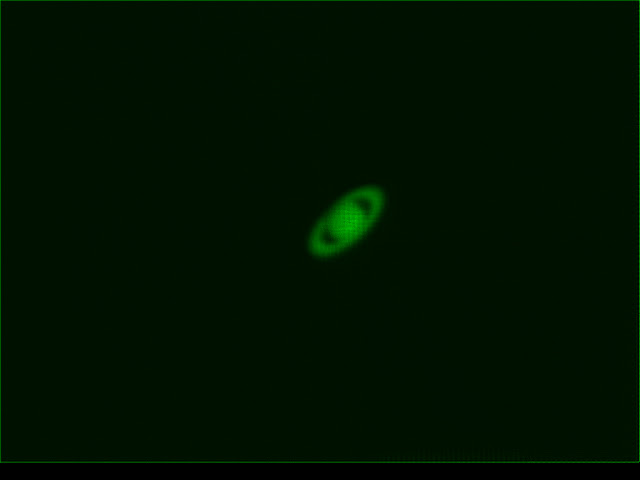 I opened up the TIFF in Photoshop, and sure enough, there is zero data in the red and blue channels.  Looking at the histogram in RegiStax before saving shows the exact same thing.  Where'd my data go??

Mars was the same, although I didn't even bother with the wavelet deconvolution (sharpening): 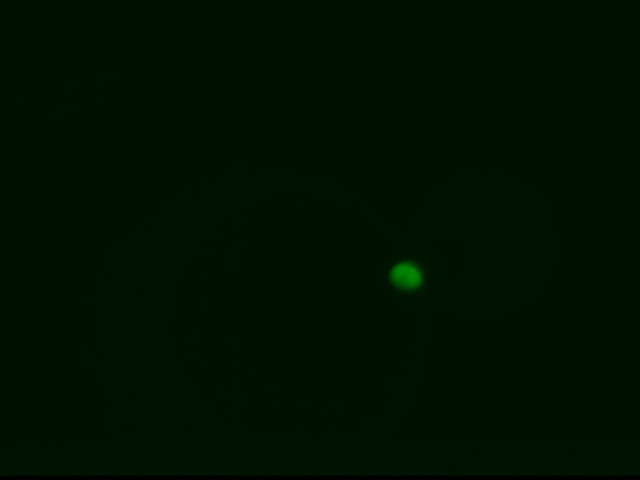 Again, no red and blue.  For the record, the videos look fine when I watch them in the SER viewer app I have, and they also look fine during alignment & stacking in RegiStax.  It's not till after that the blue and red channels are cut!

I'll try again with these and mess with some settings, and update later if I'm successful.

Posted by AstronoMolly at 6:53 PM