It's that time of year again - the Hidden Hollow Star Party!  This small star party in northern Ohio is always a fun time, and bonus, they have an enormous 36-inch reflector called "Big Blue."  However, the weather is always dicey and unpredictable!

The Clear Sky forecast showed it clearing up around 2 PM, but it was full-on clouds all afternoon and into the evening.  After arriving around 5 PM and chucking my stuff into one of the cabins (it's hosted at a summer camp), I got my gear set up in the shadow of the Big Blue observatory dome.  After heating up some leftovers for dinner (there's a food truck, but they weren't open yet), I hung out in the education building to watch Avatar on the projector screen.

A little after 8 PM, I poked my head outside and saw Mars!  I looked around, and a good portion of the sky had cleared up!  So I ran back inside to alert the small contingent who were also there a night early, and I yanked the cover off my scope and started getting focused and polar aligned.  During focusing though, I quickly ran into a problem.  I was trying a different configuration of my imaging train so that I could avoid the problem of having to attach my Hotech self-centering field flattener to the telescope's 2-inch eyepiece adapter, since the self-centering thing doesn't quite work right and is just a little bit too large to fit properly into the eyepiece adapter. I really have to jam it in there, which means I have to screw on my entire imaging chain, which is difficult to do.  So I re-arranged it with a few new components I bought: camera-field flattener-filter wheel-2 inch eyepiece connector.  However, due to the length of the field flattener's tube versus the length of the M48-to-2 inch eyepiece adapter I used to attach it to the filter wheel, it put the camera too far back from the scope to focus.  So I had to put it back to the way I had it previously: camera-filter wheel-field flattener.  Since my dovetail bar extends longer than the telescope on the back end (due to placement of the holes on the dovetail bar), I have to take the telescope out of its clamps in order to screw the whole thing onto the telescope, since otherwise the filter wheel hits the dovetail as I rotate it around.  Basically, it's a hue massive pain.  But I need the field flattener, otherwise like half of the image is warped (like this example from the 2017 Texas Star Party - scroll down to the image of the Trifid and Lagoon Nebulae).

Anyway, I got that re-done, polar aligned and aligned without issue, and then started imaging the Western Veil Nebula, which was nice and high.  I took the first two frames, and guiding looked pretty all right.  It was time for a meridian flip already, so I did that, re-centered with Precise Goto, and pressed on with the luminance frames.  I went and chatted with several other attendees.

I came back later, and upon closer inspection, my stars looked kind of funny. 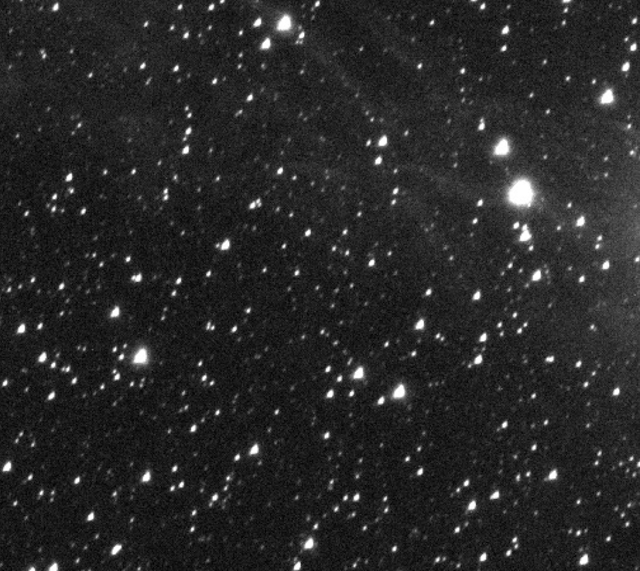 All of my frames were looking like this.  Usually when it's a tracking or guiding issue, the stars look weird differently in each frame as they streak one way and then another, but that wasn't the case here - they all looked like this.  So I thought that maybe my field flattener wasn't square with the camera and the telescope.  I tightened up a few connections, but my frames still looked bad.

Also, if I left the guiding alone and didn't baby-sit it by re-acquiring the guide star every once in a while, my guiding looked like this: 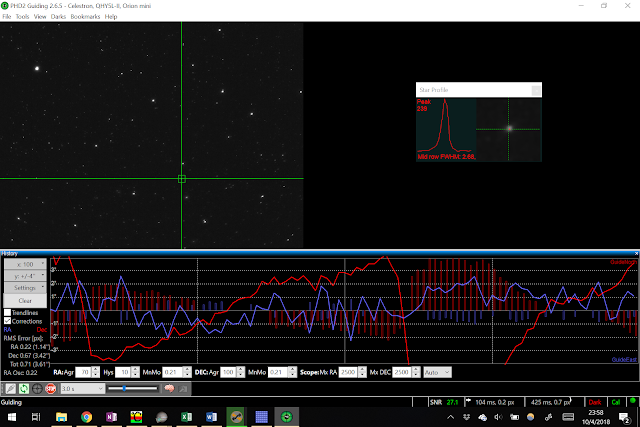 It's a continuation of the backlash problems I've been having with the declination axis of my Celestron AVX mount.  I could also tell because during calibration, after moving the scope north and then turning around and moving the star south back into the crosshairs, there was still a lot of space left where the mount had to catch up.

After the issues I had last month, I did a little Googling to see what could be done about backlash, and I found a YouTube video that showed a simple fix of moving the motor drive gear in closer to the worm wheel so that the drive gear didn't have to rotate so far to engage the worm wheel.  It's by Broke Astronomer here.  It didn't require taking apart too much of the mount, and looked like a fix that had a low risk of breaking anything, so I decided I'd give it a try the next day.

In the meantime, I tried backlash compensation in PHD, but it wasn't much better.

While my stars were looking like crap on my AVX, I also set up my Vixen Polarie with my DSLR with my 55-200mm lens at 55mm to image the Cygnus region. 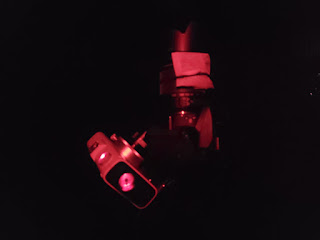 The Vixen Polarie is a simple star tracker that you point at the North Star, and then you can point your DSLR anywhere and it will track at sidereal speed, allowing you to take long exposures in a very portable setup.  The handwarmer rubber-banded to my lens helped keep the dew away.

I got quite a few clouds rolling through, but still managed to get about 60x2-minute frames that were mostly cloud-free.  I haven't stacked it yet because I forgot to collect darks, and it was 50 degrees F - too warm for a fridge, but too cold for a space in a house.  So I'll just have to wait until it's cool again at night to capture those dark frames.  But here's a single frame: 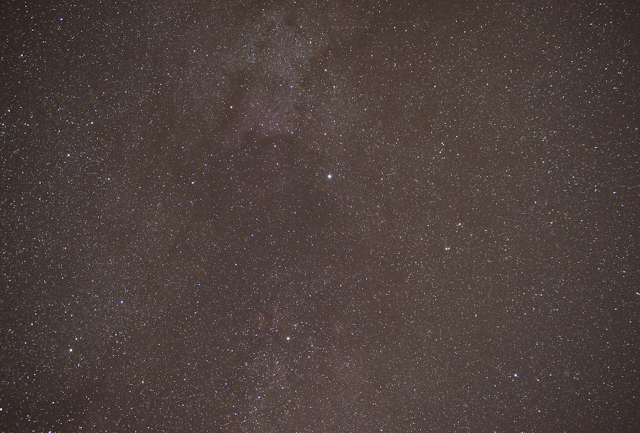 The brighter star in the middle is Deneb, and the dimmer one is Sadr.  It doesn't look like much now, but after I stack it, it'll be awesome! 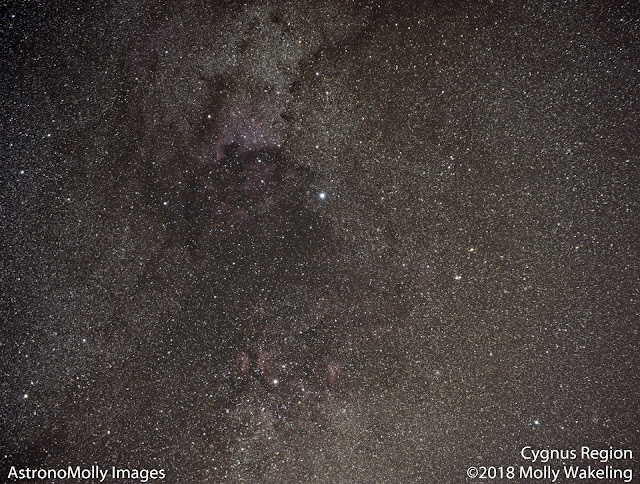 I wasn't able to pull a ton of contrast from it in Photoshop, primarily because of the thin high clouds that were sweeping through (I had to delete a lot of frames before I got to the 60 that make this image), but the red H-II regions (hydrogen alpha) came through, which was exciting!  Those are head to get on an unmodified DSLR.  I'll try again sometime in PixInsight.  The color balance isn't quite where I'd like it either, but getting that right with a DSLR (which for me always come out green) is tough!

After 2:30 AM, I moved the DSLR over to see the Orion constellation, but by then there were a lot of clouds rolling through.  I finally went to bed around 3:30 AM, after packing up the DSLR and Polarie and putting a cover over my telescope.  Everything was pretty soaked with dew.

The night was much clearer than predicted, which was great!  Too bad my mount was still being ridiculous.  I'm getting pretty tired of constantly fighting my mounts!

Table of Contents
Posted by AstronoMolly at 2:06 PM