All weekend at the Hidden Hollow Star Party, Sunday night was looking to be the most promising night, and some of the local astronomy club members were talking about staying another night.  I was planning on it, and I had extra food and clothes to do so.  But then I checked the forecasts for both there and home, and home actually looked more promising!  So I packed up Sunday morning and drove back, dropped off my personal gear, picked up my C8, and turned right around and went to the observatory!

The forecast wasn't perfect, but I was highly motivated to try after an energizing weekend talking about astrophotography and sharing that skill with others at the star party.  It turned out better than forecast - there were no real clouds around, although there was still a thin high haze.

Since I had fixed the declination axis backlash, I decided to try again with my Celestron 8-inch Schmidt-Cassegrain on my Celestron Advanced VX mount after some recent difficulties (here too) (and here), using the Lumicon off-axis guider I'm still borrowing.  However, my dec axis wound up a little tight after all the messing with it I did, so it was even harder to balance than normal.

Once I got everything up and running, I decided to image the Dumbbell Nebula, since it would be bright enough to push through the haze.  Pretty quickly upon starting up PHD, I saw some problems though - now the right ascension axis was showing some crazy backlash too, requiring a lot of steps to clear during calibration.  The two axes came out highly non-orthogonal, and they seemed to be error-ing in the same direction.  It was super weird. 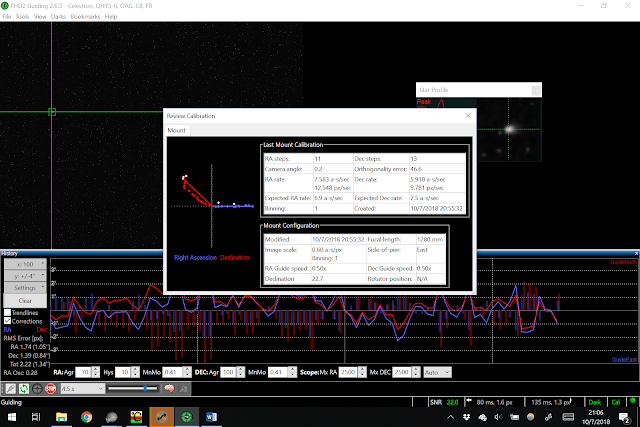 I decided to try taking some subframes anyway, and unbelievably, they looked fairly decent... 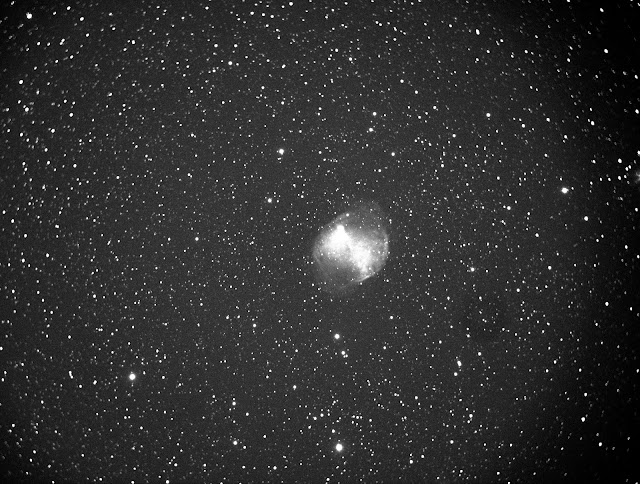 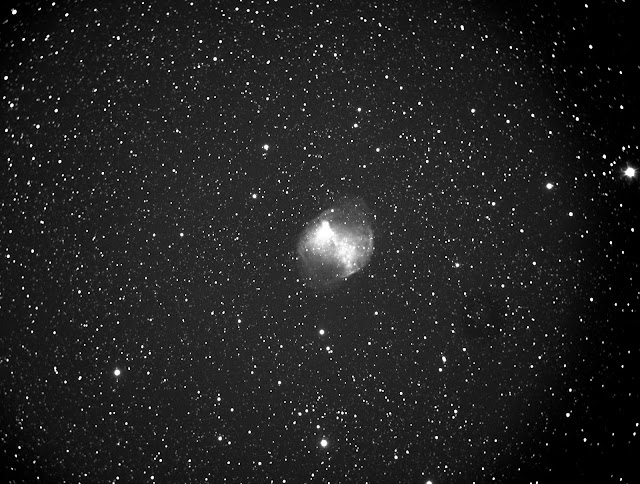 Don't mind the little difference in target brightness between the two of them; the raw file viewer I use, AvisFV, auto-levels them for viewing purposes.

Zoomed out, they look all right, but if you zoom in, the stars are kind of icky. 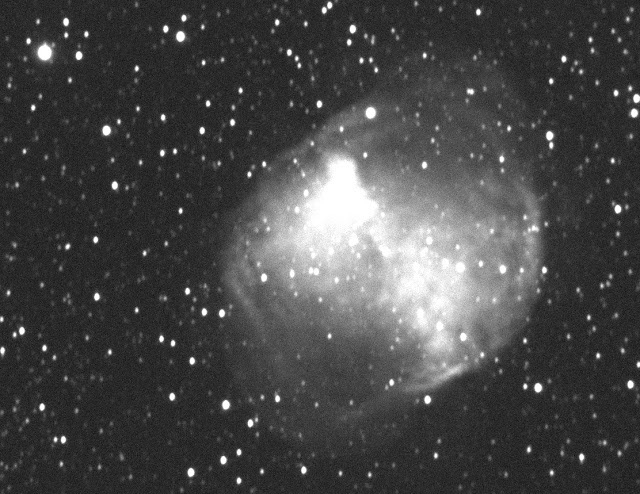 So I went ahead and re-calibrated PHD, but it didn't make it through calibration - it got to like step 60 during the declination portion and had still only moved the target star only 18 pixels (it needs to move it 25), and it was like getting stuck there or something.  So I decided to turn off guiding in declination just to see what would happen, especially since my polar alignment went well. 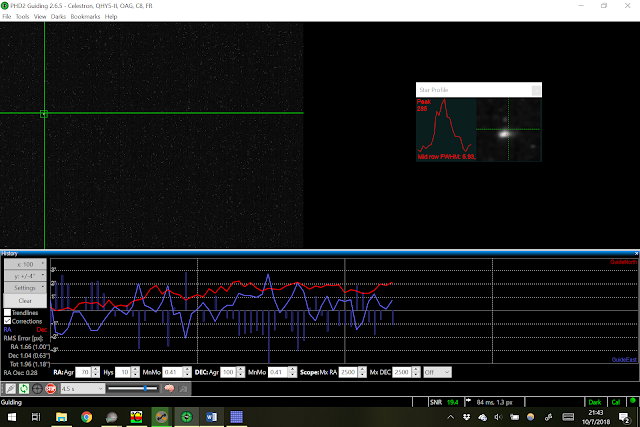 My polar alignment must have indeed been good, since dec only drifted a little bit (the red line).  The frame came out looking about the same as the others I took, at 2 minutes. 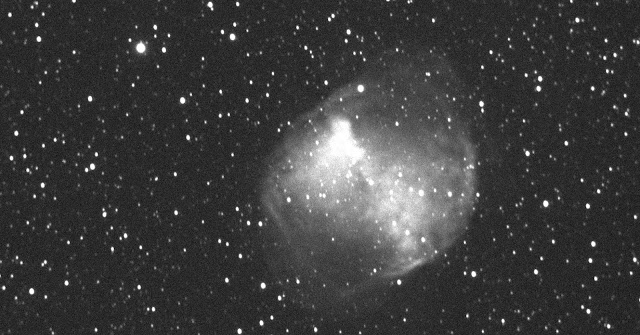 I also tried just not guiding, but that one looked a little worse on a 2-minute frame.  I tried re-calibrating, but there was still some serious backlash in RA when it switched from moving the star east to moving it west.  So I'll need to open up the RA axis here soon and apply the same fix as I did for dec this weekend.

Since that wasn't working, at around 10 PM, I pulled off the C8 and put the Borg on instead.  That took about 35 minutes to do, including re-balancing and re-aligning.  But it was worth it because the calibration looked mountains better. 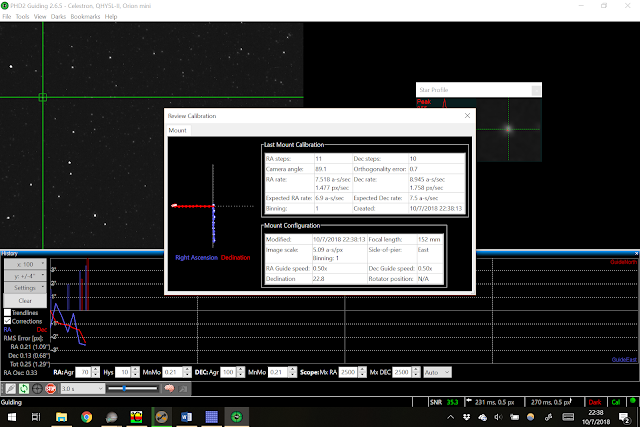 I met someone at Hidden Hollow who got their 9.25-inch Schmidt-Cassegrain to take multiple-minute unguided exposures on his AVX, so either I'm unlucky and got a crappy one, or he was very lucky and got an unusually well-machined one!  Very frustrating for me!

In any case, I decided to image the Dumbbell on the Borg anyway, even though it's a much smaller target for that configuration, since it was up high in the Milky Way and the sky was kind of hazy still.

Finally, at 11 PM, everything was up and running and ready to go, and I was acquiring my red data.  Guiding was a little messy due to the atmospheric conditions, but with the generous 2x1.5-degree field of view that my ZWO ASI1600MM Pro + Borg 76mm apochromatic f/6.6 refractor provides, those errors didn't show up, and I got nice round stars and nice detail inside the nebula. 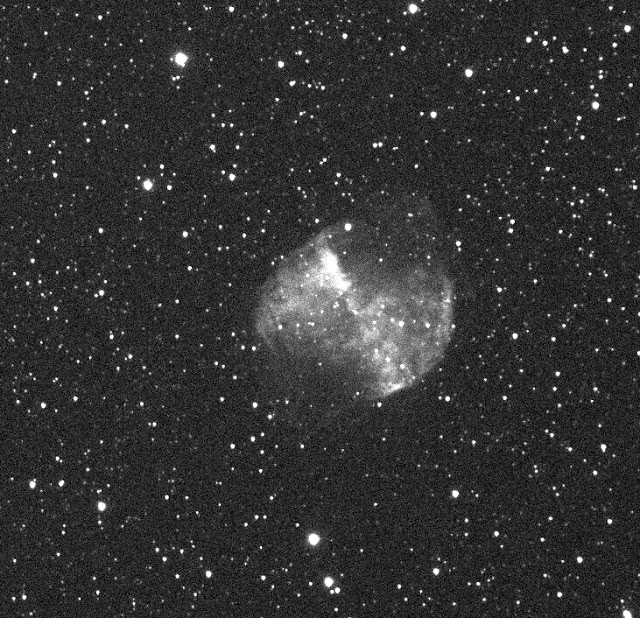 The rest of the night went swimmingly, although the swimmingly icky atmosphere just got worse and worse as the Dumbbell sank closer to the western horizon.  I completed getting 15x3-minute frames per color channel by 1:20 AM, and I packed up and headed home.

While I was processing my Hidden Hollow data on Monday, I also processed this dataset, and it came out pretty decently!  I didn't take luminance, so I created a synthetic luminance frame the same way I did here for the Eastern Veil Nebula. 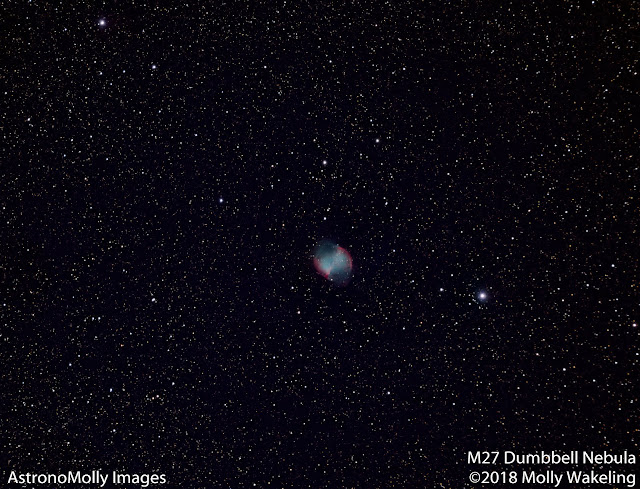 Not mind-blowingly awesome, but really good considering the atmospheric conditions!  Now I just need to get everything optimized for trying again with the 8-inch.  I am bound and determined to have a lightweight, small-FOV imaging rig!  I know it can be done!!