With the increasingly complex deep sky imaging rigs I have, and all of the gear that is necessary to make it work, it was nice on Thursday night just to throw my 8-inch Schmidt-Cassegrain, its simple alt-az mount, a battery, tablet, camera bag, table and chair into the car, like old times.  Three trips got all the gear in the car instead of nine.  It reminded me of when I first got started, and we get fit everything into the trunk of my then-boyfriend's Corvette.  Now it usually takes the entire back of my compact SUV!

Before that, though, I helped mow the lawn at the observatory earlier in the evening, and I had brought along my camera bag in the hopes of having time to image the sun before it went below the trees.  I got there late from work, so they were already mostly done.  So I pulled out the club's Lunt solar scope, set it up on the club's Celestron NexStar SE mount (the exact same one I have), and first put an eyepiece on it to see how things looked.

The sun was so.  Boring.  Like, the most boring sun I've ever seen!  No sunspots, no plages, not even any prominences.  At first, I thought I saw a tiny sunspot, but it turned out to just be a dust mote on the eyepiece (it didn't stay with the sun when I tapped the telescope).  As it turns out though, there was a sunspot there!  It's about a third of the way up from the bottom, near the center. 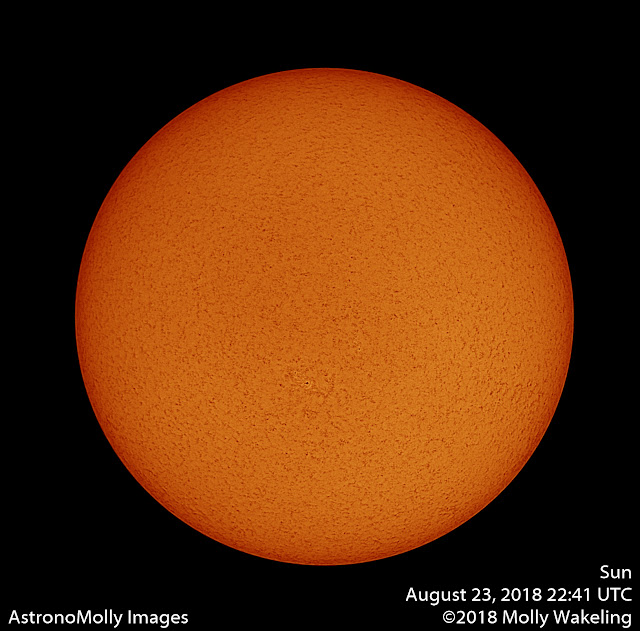 After getting dinner with one of my friends, I went back to my house and loaded up my gear into the car.  Since the moon is large and bright this time of the month, it was a planetary imaging night rather than a deep-sky night.  Usually I do planets from my front yard, but the apartment building blocked where Jupiter and Venus were, so I drove to a nearby empty cul-de-sac on top of a hill.  Venus was rapidly dipping toward the horizon, so I rushed to get everything setup, and was ready to go in about 10 minutes.  Once I trained the camera on Venus, however, I could see right away that it wasn't going to work - the atmosphere was boiling like crazy that low, and Venus was a blobby, crescent-shaped mess.  Oh well, next time.

This year is excellent for planet-lovers - literally everything is up right now if you stay out late enough (and Mercury rises before the sun in the morning - not by much though!).  If you don't want to stay up late, you still get the best of show - Jupiter, Saturn, and Mars, plus Neptune if you so desire.  I worked my way across the sky from west to east.

Jupiter was my first target, and after using my Bahtinov mask  to focus on Arcturus, I centered Jupiter, and then cut the ZWO ASI1600MM Pro's frame size from its native 4656x3520 down to 640x480.  The primary reason for this is faster frame rate.  The atmosphere is always moving and swirling, and every once in a while, you get a clear column of air.  A high frame rate will get you more frames in those moments of "good seeing."  In addition, planets rotate, and Jupiter rotates fast - you need to collect your data within a 3-minute window to minimize the rotation.  With a monochrome camera, that means collecting a few thousand frames on all four channels - luminance, red, green, and blue - in that time frame.  I usually collect 2,000.  When I run at a small cropped frame, and the planet is bright enough to have fast exposure times, I can get 100 fps or more.  It only took about 20 seconds to get each color channel!  However, I could see on the screen that Jupiter wasn't looking very good - it was pretty fuzzy, and I couldn't make out much detail.  I could also see the edges undulating.  This meant that the seeing was still pretty bad, even though Clear Sky promised 4/5 seeing conditions.  It was only about an hour after sunset, though, so there was still ground heating and other sources of turbulence.  If I came back later, then it might be better.  But sometimes, the data can surprise you - and I was very surprised with this data set!  The videos looked bad, but the RegiStax image quality ranking plot actually looked pretty promising, and then each color channel, once I stacked and applied wavelet deconvoution, looked great!  It just goes to show, don't decide that your data is junk until you've given it a fair shake...

All my data that night also turned out weirdly dim, so I'm not sure what's up with that, but punching up the brightness in RegiStax helped.
Here's the final product! 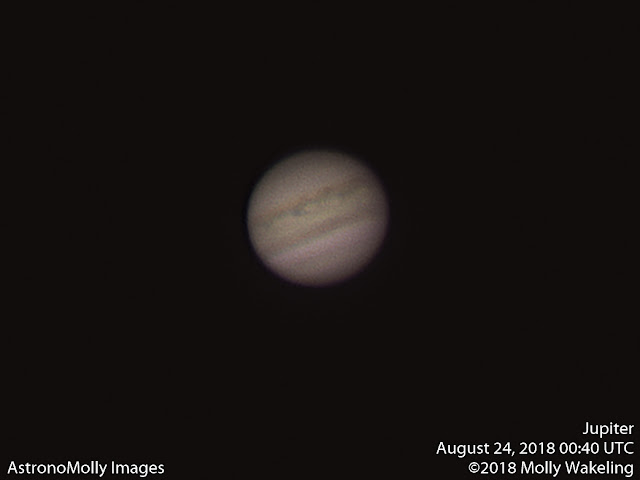 Not too bad!  Not my best, but way better than I thought it would be based on the videos I took!

Next was Saturn!  I decided to try something I haven't tried with this camera yet - adding a 2x Barlow.  This is a lens that you can screw onto the nosepiece, and it doubles your magnification.  It also doubles your effective focal ratio (so on my C8, from f/10 to f/20), which makes the image dimmer (this is a result of the light being more spread out among the pixels).  So my frame rate was a tad slower due to the longer exposure time, but Saturn's rotation is much less obvious than Jupiter's anyway (and slower).  The seeing was starting to settle by this point, but I still didn't get quite the sharpest image of Saturn. 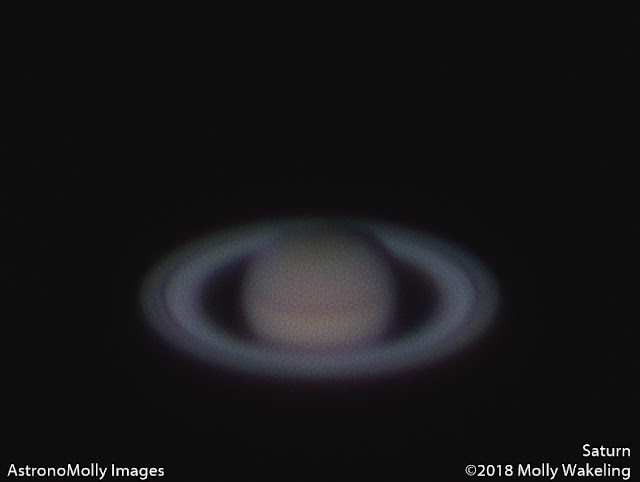 Next was Mars!  Now that the dust storm as abated, there's a lot more surface detail to see.  If the atmosphere cooperates, that is.  I tried with the Barlow on, but they all came out too fuzzy from RegiStax - I didn't even bother combining the color channels.  The un-Barlowed one looks better, although I did get some artifacts near the left edge. 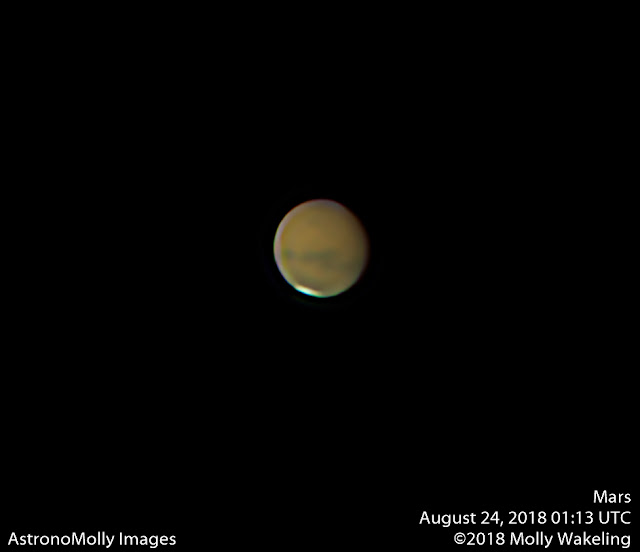 Last week, the venerable lunar imager Robert Reeves gave me a tip on using the Shake Reduction filter in Photoshop to tease out a little additional sharpness.  Sometimes it works, and sometimes it doesn't, but it did all right with this image.

Next was the moon, with the Barlow still on (I imaged the moon between the zoomed-in and zoomed-out sets on Mars).  It's nearing full, but there were still some gorgeous shadows in the craters near the unlit edge.  These take forever to register in RegiStax due to the large number of align points.  I took the images with the red filter, since red light is scattered less in the atmosphere, and I find my images always come out sharper with that filter than with luminance, green, or blue. 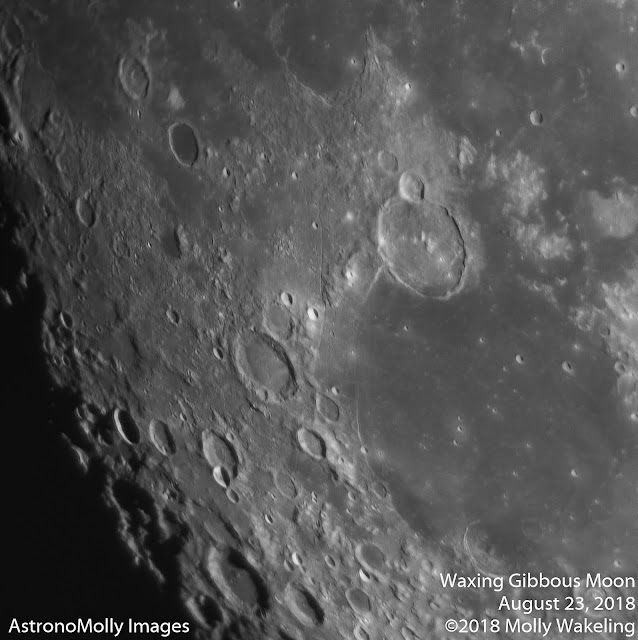 I took a second set of images as well in a different area, but my mount is not the best at tracking, and the image shifts frame-to-frame ended up being too much, and it didn't come out well.

I swung back my Saturn after I re-did Mars without the Barlow, and got this much-better image. 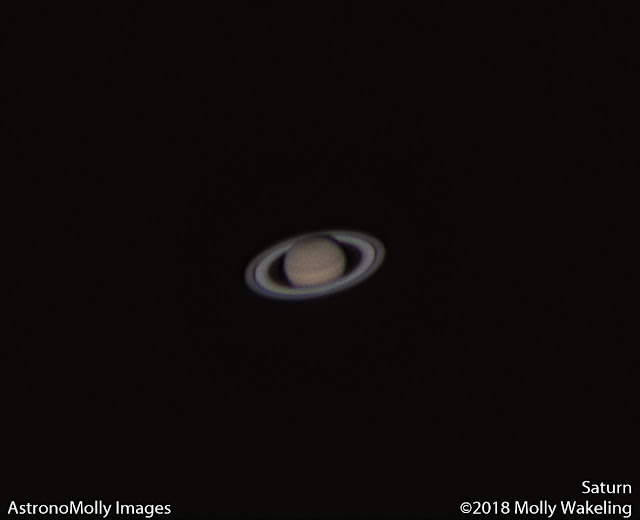 Also, it's not just the camera that was seeing less-colorful images than usual - I looked at Saturn, and it seemed almost de-saturated in color.  Mars even naked-eye looked less red.  I'm wondering if that is a result of the moonlight washing things out, or maybe some aerosol or smoke in the atmosphere, or something like that.  My Jupiter image came out rather colorless indeed.

I only reluctantly packed up and went home at 11:15 PM - the atmosphere was getting more steady, and I wanted to try some different things.  But I had to be at work the next morning, so off to bed!  I really miss imaging DSOs - my last one was over a month ago - but planets are fun too.  And you can actually see them in the telescope - sometimes better than the camera can!

Posted by AstronoMolly at 9:40 AM