I've still got my hands on the Lumicon off-axis guider, and I am determined to get longer than a few minutes of guiding on it with my Celestron 8-inch Schmidt-Cassegrain riding atop my Celestron Advanced VX mount!  This setup is of vital importance to get working.  It is both lightweight and has a small field-of-view, which is a hard combination to get.  Currently, I have two "easy" setups - the club's memorial telescope, which is a 5-inch refractor that lives under a backyard dome out at our observatory and requires no setup besides slapping my cameras on it; and my AVX mount with my 3-inch Borg refractor, which requires a little more effort, but the large field-of-view is very forgiving of tracking and guiding errors.  Both of these setups are refractors, which are great for big targets like nebulae and some of the larger galaxies, but not so great for small targets like planetary nebulae, most galaxies, and planets.  The easiest setup, the club's memorial telescope, has the additional drawback of not being an apochromatic refractor, meaning that my stars have these blue halos around them - which are far more pronounced in my awesome ZWO ASI1600MM Pro astrophotography camera than in my Nikon D5300 DSLR.  My 3-inch Borg refractor is an apo, but does require setup and me hauling gear in and out of my apartment. 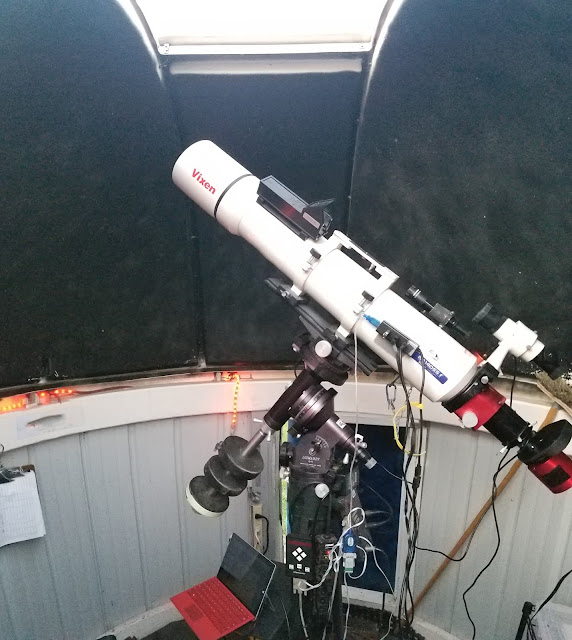 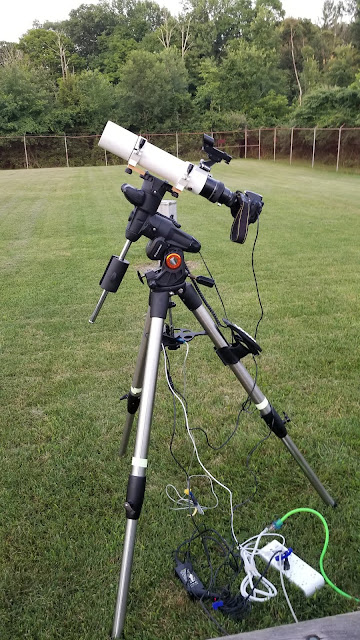 My 76mm Borg aprochromatic refractor on my Celestron Advanced VX mount.  Shown here with my DSLR.

In addition to the two "easy" setups, I have one "hard" setup - my Celestron 11-inch Scmidt-Cassegrain on my Celestron CGE Pro mount.  But there are a few problems with this setup: it's heavy, it takes forever to put together, and the mount is actually having a few problems at the moment.  However, the 11-inch SCT is excellent for small targets, having a field-of-view of less than half a degree (compared to 2-3 degrees for the refractors), making it perfect for those itty bitty planetary nebulae and the more distant galaxies.  I call this one "The Beast." 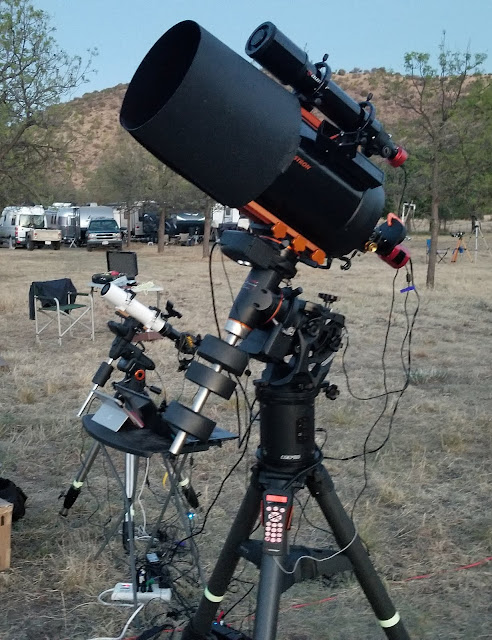 My 11-inch Schmidt-Cassegrain on my Celestron CGE Pro mount down at the Texas Star Party this year.

Now, I primarily use my 8-inch as either my outreach telescope or a planetary imaging scope aboard my Celestron NexStar SE alt-az mount, which is not good for photography but is super easy to use (and the very short exposure times for planets make it fine to use for that application as well), but I wanted to try to utilize it for another purpose: lightweight deep sky imaging.  I say "lightweight" because my 11-inch weighs 28 lbs, while the 8-inch only weighs 13 lbs.  So I decided to pair it with my Celestron AVX mount, and I got to start trying that out last month.

One tool will make this idea much more possible: an off-axis guider.  Rather than attaching my 4-lb Borg to the top of the C8 and cause further complication with the weight distribution, I can attach a tiny addition to the back of the tube and autoguide using that!  However, my testing so far revealed two problems: a lack of bright-enough stars to guide on in the small pick-off mirror, and some serious backlash in the declination axis.

Saturday night, I got to try out a possible solution to one of those problems: the QHY5L-II camera.  Currently, I guide with the QHY5 red hockey puck, which is fairly old and not nearly as sensitive as newer guide cameras.  Fellow astrophotographer John let me try his camera that evening. 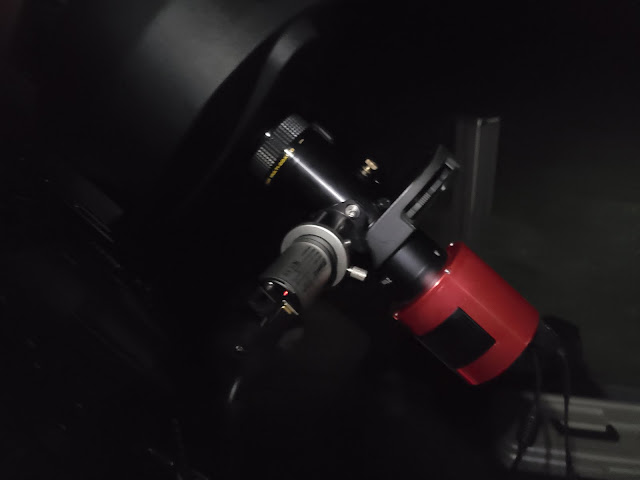 Back of my C8 with my ZWO ASI1600MM Pro camera attached (red) and John's QHY5L-II guide camera (silver).

Now, all of the forecasts promised it was going to clear right about 9 PM - all of them!  Even my two astronomy forecasts, which show high-altitude clouds (most regular forecasts don't include these, since it will still seem "clear" to the casual person).  But nope!  'Twas not to be.  There were slow-moving high cloud banks rolling through until 11, and there was a haze that did not dissipate.  However, up at zenith, I was able to see stars at least, so I slewed to the Dumbbell Nebula so I could at least test the guide camera.  In addition to the camera, I also borrowed a small front counterweight from John, which I taped to one of my Vixen dovetail clamps for my Borg scope and slid onto the front of the dovetail of my C8 to help with balance.  We were able to find a pretty good balance point.  It's hard to tell with the AVX, though, since the axes are pretty tight and it doesn't swing freely like other mounts do.

Results were good!  After taking dark frames to beat down the background noise on the sensor, I was able to see several potential guide stars in the image with minimal noise!  Finally, some progress. 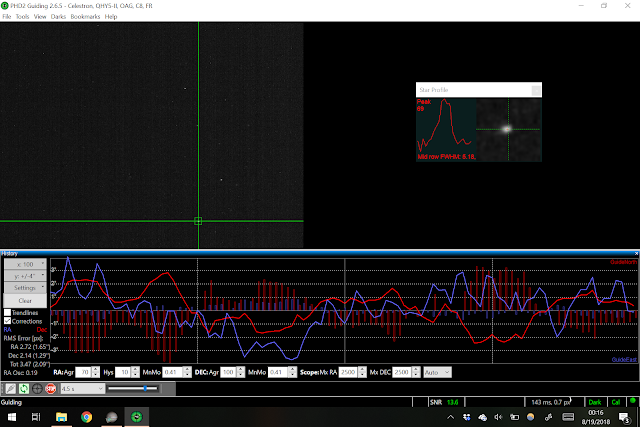 Unfortunately, the backlash in the declination axis was still, present, despite the careful balance.  My polar alignment was good, and the way that it flips around the axis would seem to indicate that it's not polar alignment.  In addition, I could see the pause when changing directions in dec when I was looking at stars in the main camera.  *sigh*  So I'm not entirely sure what to try next on that front.

I tried taking images anyway, but they all were streaky in dec, even at only 60 seconds.  Now, the seeing wasn't great either with all the clouds and haze, so it still wasn't a true test, but I think I'm still going to have to figure out this backlash issue.

It's been over a month since my last deep-sky image - it's summer time, with all of these fantastic targets to image, and I'm dying! 😭😭  Cloudy and moonlit weekend nights don't help!  The next new moon (or even third quarter), I'm just going to bring my refractor out and image on that instead!  And keep brainstorming ways to get the C8 to work.