I am a Girl Scout troop leader, and I've been a Girl Scout continuously since 1998 when I was a Brownie.  It's really interesting to see how different the boy's and girl's programs are.  The two Boy Scout merit badges I've taught are very rigid, knowledge-based recitations of facts.  After the last STEM merit badge I taught, their troop leaders were quizzing them on questions in the requirements list.  The Girl Scout program, on the other hand, encourages exploration of a topic, and looks at multiple aspects on the theme of the badge.  They often include options to speak to people in a related career field about what they do.

For example, here is one of the requirements of the Boy Scout Astronomy badge:


3.    With the aid of diagrams (or real telescopes if available), do each of the following:
a. Explain why binoculars and telescopes are important astronomical tools. Demonstrate or explain how these tools are used.
b. Describe the similarities and differences of several types of astronomical telescopes, including at least one that observes light beyond the visible part of the spectrum (i.e., radio, X-ray, ultraviolet, or infrared).
c. Explain the purposes of at least three instruments used with astronomical telescopes.
d. Describe the proper care and storage of telescopes and binoculars both at home and in the field.


And here's one of the requirements for the Girl Scout "Sky" badge, which is a Senior-level badge (9th-10th grade): 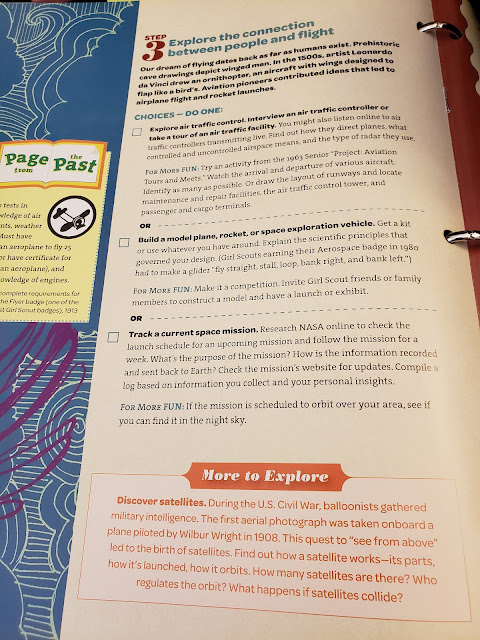 It was a bit of a struggle to come up with some ways to make teaching the Boy Scout badge requirements interesting - but I made a powerpoint of just pictures, and let the force of my science enthusiasm make the interest.  I made a point of mentioning my Girl Scout experience, my occupation, and my physics degrees :)

I only had an hour and a half to cover both the requirements that are very much "let me tell you about this thing" and to show off some sights in the telescope.  I brought my 8-inch Schmidt-Cassegrain along on its Celestron NexStar SE mount, as well as my Oberwerk binoculars that I won at an astronomy symposium in 2016 so that I could show the difference between refractor and reflector, and between binoculars and a telescope, in one swoop.

Their meeting ended at 9, but the sun set at 8:30, so the planets popped out one by one as soon as we got outside toward the end of the meeting.  The parking lot of the church they met at was brightly lit, but the sky was fairly open, so planets made easy targets.  First was the Moon, which always surprises and delights people because it's something you see all the time, but seeing the amazing detail of the craters in a big telescope is really something else.  I trained both instruments on it so that they could compare.  Next was Venus, which was a beautiful crescent, slightly less than half-lit.  This was perfect, since I'd spent a little time in the talking portion on why Mercury and Venus have phases, but the others don't.  After Venus I worked across the sky from west to east, hitting up Jupiter next, which was peaking out its red spot low and to the right, and had all four of its Galilean moons on brilliant display off to the right (SCTs flip images left-right).  Next was Saturn, which is also a real crowd-pleaser, since it looks very much like you just hung a picture of it in front of the telescope.  It's always so sharp and unreal-looking.  It's my personal favorite at the eyepiece.  And, finally, Mars, which was brilliant.  It's so big right now!

The meeting ended too soon, and the boys took off home.  We took a group photo, but there are rules, especially in Scouts, about posting images of minors on social media.  So I blurred the boy's faces, since I don't know who all has given consent, but also wanted to share the image! 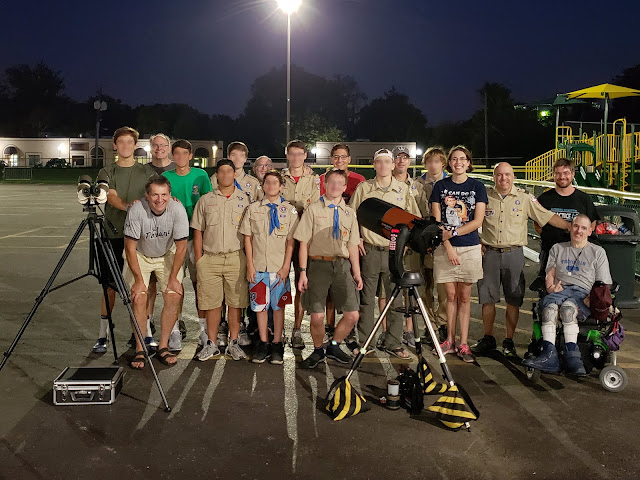 It was a fun night of outreach!

Table of Contents
Posted by AstronoMolly at 4:47 PM