Unbelievably, another clear night lay ahead!  Let's see, so that's Friday, Saturday, Sunday, Monday, and Wednesday...I am losing track of the day of the week!  Soooo many late nights.

For the last two years, I have averaged 50 nights per year, or nearly one night a week!  My first night out with my telescope was July 10, 2015.  I hit night #50 on July 9, 2016.  Night #100 was July 28, 2017, although I might have hit it earlier if not for the jaw surgery I had last May!  Now night #150 is tonight.  I include nights that are unsuccessful and outreach nights - the requirement is that I pull out a telescope or binoculars and at least try.  I personally think that that is pretty amazing, especially considering that I hold down a full-time job too!  But the joy I get from the challenge of astrophotography and from sharing the wonders of the night sky with as many people as possible heavily outweighs the sleepiness of being out on week nights and the hours spent at my desk getting these images processed (which is also part of the fun challenge).  My first year was definitely Getting My Feet Wet.  The second year was Entering the Big Leagues.  The third year was The Year of Borrowed Equipment.  This year will be getting more out of my own gear!  Bring it on!

I had a sore throat on Wednesday, which disappeared and turned into a cough on Thursday.  Many of my colds are like this; I'll have a different symptom each day, but not usually feel very sick at all.  It's what I would term a "head cold," I guess, where I feel like I could go for a run, except that it might be hard to breathe.  Despite the cold, I went back out again anyway!

Since Friday night was looking good too according to the forecast, and even Saturday night showed potential (and because the club's memorial scope was out of commission), I decided to bring out my 8-inch Schmidt-Cassegrain, the Borg refractor to guide it, and put it all on my Celestron Advanced VX mount, the experimental setup I just got working on Friday.  It was grass cutting night at the observatory, so there was plenty of time between when we finished cutting the grass until sunset, so I took my time getting my rig set up.  My minion Miqaela brought out her Celestron AVX, along with an Explore Scientific 80ED that she was borrowing from club member Steve.  It's an apochromatic scope, which promised much better images than the achromatic Orion ST-80 she's been imaging on.  The Explore Scientific scope is physically very short, so you have to add extension tubes to actually get to its focal length of 480mm.  We had to slide her DSLR a little ways out of the second and last extension tube in order to achieve focus!  Her target for the evening was M8 and M20, the Lagoon and Trifid Nebulae.  She kept on that target and got 20x300s frames on it, and came out with a rather nice image! 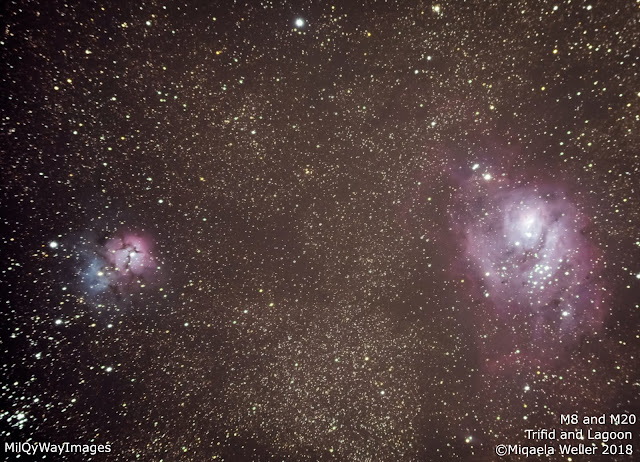 A little bit of curvature around the edges due to the lack of a field flattener, but I'll let her borrow mine next time...
She's definitely starting to get the hang of this!

I got my gear rolling, and guiding was working pretty decently again.  You know, I've been so excited to finally get my 8-inch working on the AVX so I can image smaller targets, and now that it's summer, all of the big juicy nebulae that make perfect refractor targets are up!  Go figure!  The sky was also a bit hazy - not as bad as Wednesday night, but still not good enough for the tougher targets.  So I decided to get RGB color data on the Trifid Nebula, and then get the luminance on a clearer night.  I aimed for 10 each of RGB, or a half hour at 3-minute exposure times, but I lost a few to tracking error. 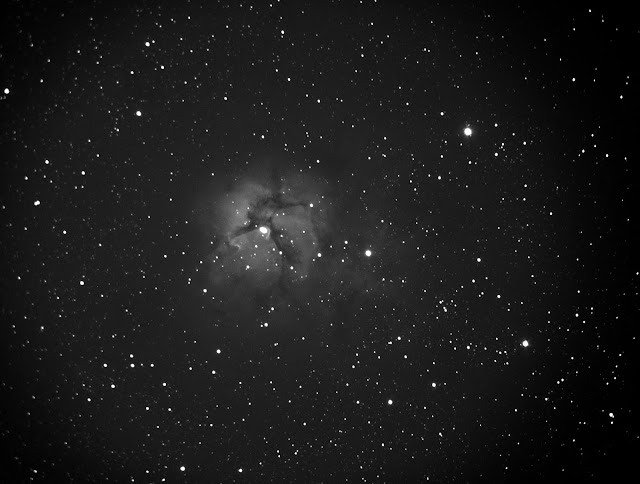 One of the 3-minute raw red subframes.  Looking nice!

Once I had collected a sufficient number of color frames, I decided to try a new type of object that I had not yet imaged or even tried to look at: an asteroid!  Well, I'm not really counting the time I trusted the goto on my Celestron NexStar mount to plant an asteroid right in my field of view back in the early days.  One of the club's board members put forth a challenge to the club to either see the asteroid (minor planet) Vesta over multiple nights move across your telescope's field of view, or to image it.  So I decided to image it!  Since it looked like it was going to be clear Friday night too, my plan was to image it tonight, and then image it again Friday night, and see how far it moved.  But first, I had to actually find it.

Since my mount has goto, I put in the right ascension and declination coordinates that my cell phone app SkySafari told me Vesta would be located at, and I did a Precise Goto, which uses the location of a nearby star to more accurately figure out where the object you are actually trying to get to is.  There was definitely something bright in the field of view, but there were several other stars as well, and sometimes differences in brightness can be harder to gauge on camera images, since cameras don't have the dynamic range our eyes do.  So to be absolutely sure that the bright dot in the field was indeed Vesta, I uploaded a jpeg screenshot to astrometry.net.  This is a plate-solving website that will ingest your image and come back a few minutes later with where exactly in the sky your image is and what stars and deep sky objects are located in it. 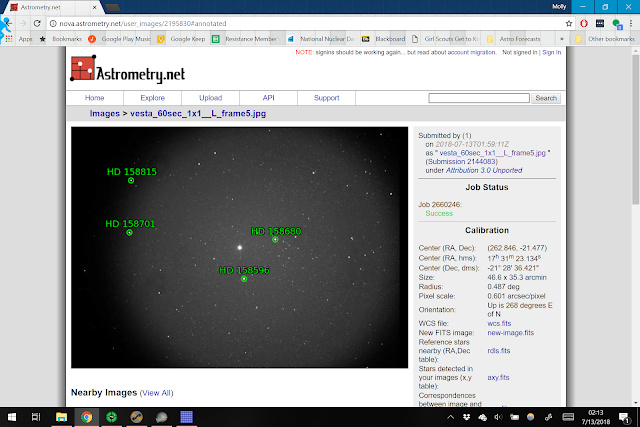 It successfully plate-solved the image, and it showed four of the fainter stars in a trapezoid around the bright object I thought might be Vesta.  Now, since it was so bright (mag 5.9), if it were a star, it would definitely be in the catalog.  But since it's not, it had to be Vesta!  I checked by putting one of the HD stars shown in the labeled image into SkySafari, and yes, it was indeed right next to where it said Vesta would be.  Cool, I found it!  Well, the mount found it :P Yay modern technology!

After Vesta, I slewed over to Mars and took off the focal reducer so I could get a little more resolution.  I wasn't expecting much with the thin haze, but it had cleared off some, and I figured I might as well try. 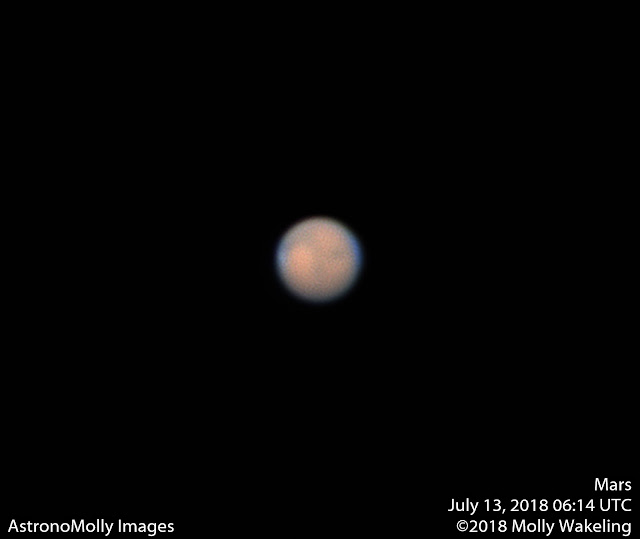 I could tell by how many frames I had to cut out of the stack that it was pretty messy data, but you can still see some vague color differences between the brighter and darker regions!

Since I had an unlimited amount of time to sleep in in the morning, and since I was going to leave my equipment set up, I was able to stay out later to capture all of this.  I got to bed around 3:45 AM!  And still feeling pretty good :D Getting some sleep in the morning hours helps!


Table of Contents
Posted by AstronoMolly at 7:20 PM