Two spectacularly clear nights at the National Youth Science Camp near Green Bank, WV!  I had another group of 20 or so delegates the second night, all equally eager to find out what this astrophotography thing was.  After spending some time talking about the parts and pieces of my setup, how a German equatorial mount works, and the type of monochrome cooled camera attached to it and why it was awesome, I showed them some of my images as well.  Lots of ooh's and ah's.  :)

Even though I was aligned from the previous night, I have found that there's usually a small adjustment that needs to be made to the polar alignment from night to night for non-permanent setups, most likely because they get bumped slightly when taking gear on and off, covering and uncovering them with the thermal cover, etc.  I decided to use SharpCap's polar alignment routine instead of Celestron's All-Star polar alignment because I think it's a little more precise, plus it tells you exactly which way to move the mount and how much.  It's a really neat procedure, and the bonus is that you don't have to be aligned first like you do with Celestron's routine, so it saves some time. 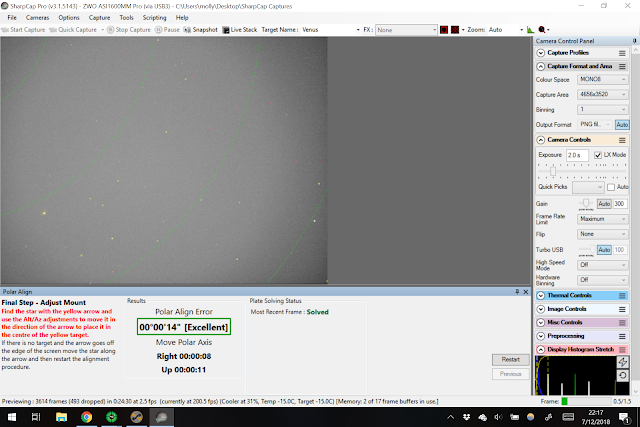 First, you put your scope in the "home" position, where it's upright and looking north.  Start the routine, and set your exposure time to 1-3 seconds, and I usually bump up the gain so that it has an easier time seeing the stars.  It will start taking images until it can detect at least 10 stars or so, and then it plate solves and tells you to go to the next step.  Next, you rotate the mount 90 degrees (either by slewing or by releasing the clutches, it doesn't matter), and it will keep taking images until it can plate solve the image.  Plate solving means that it compares the stars seen in the image to a database, and it uses the distances between the stars to determine which stars they are, and thus where you are looking.  Finally, it tells you how far and which way you need to move the altitude and azimuth adjustment knobs on your mount in order to be polar aligned.  The readings are in degrees:arminutes:arcseconds.  It also gives you a score of "poor," "fair," "good," or "excellent," depending on how close you are, and it shows a line on one of the stars on the screen to show you which direction to move it as well.  Once you are there, then you restart the scope (if you had a previous alignment saved) and start your alignment routine.  Easy peasy!

I again had the students help with the alignment routine, and they were fighting to get a chance to align one of the stars!  I had them align the 8-inch Schmidt-Cassegrain I had set up on my Celestron NexStar SE mount off to the side for visual observing as well.  Gotos were not spectacular on my imaging rig, unfortunately, so getting it aligned was a bit more of a challenge.  Also, sometimes the heavy USB 3.0 cable going from the hub to my Surface 3's lone USB port tugs on the port a bit, which pushes on the screen, and it gets all kinds of erratic input, pushing buttons and opening and closing programs and all kinds of stuff.  Then I just have to yank it, close everything, re-position the cable, and start everything back up.  This happened, so I had them go look at the Whirlpool Galaxy and the Ring Nebula.  After that, I got PHD calibrated, showed them what the guiding looked like, and then finally started acquiring images around 11:15 PM.  I continued on the target we started the first night: M51, the Whirlpool Galaxy.  I had acquired 10 luminance frames the first night, so it was time to start the color images.

I lost a frame or two from accidentally leaving the Bahtinov mask on (used for focusing).  Boy was I getting sleep-deprived! 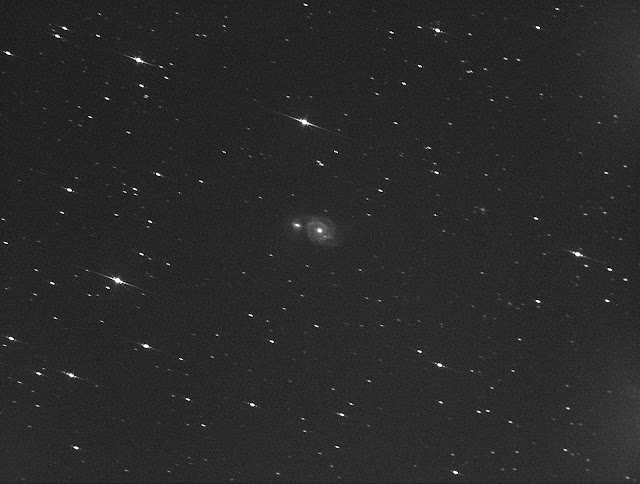 What happens when you leave the Bahtinov focusing mask on when you image!

Four nights in a row (Friday, Saturday, Sunday, and Monday) of staying out late doing astrophotography and then getting up at 7 AM either for somewhere I had to be or from early camp wake-up call was starting to get to me.  The body and mind can only take so much!  But the students were excited, and I was excited as usual, especially because of how fantastically dark and clear the skies were.  Unfortunately, not only did I make that mistake, but when I went to go rotate the filter wheel to collect the blue frames after collecting the green ones, I noticed that I actually landed on the red filter - I had rotated backwards instead of forwards after the red images!  Luckily, backwards from red is luminance, so I got 7 more luminance frames, which would make my image even better.  The downside though was that I was going to have to stay out a little later to finish.  I really wanted a complete image to give to the delegates who participated in the demo.  So I rotated it to the green filter, collected 7 green frames, and then 7 blue.

While the images were going, I had lots of time to go look at a variety of things in the 8-inch, shoot some Milky Way widefield shots on my DSLR, and just enjoy the dark skies.  Unfortunately, I didn't bring enough handwarmers since I had to use two on my Borg for de-dewing, so I didn't get much of anything good on my DSLR.  I did get his mosaic of 6 1-minute panels, however.  It took Photoshop's Photomerge tool over an hour to stitch it together! 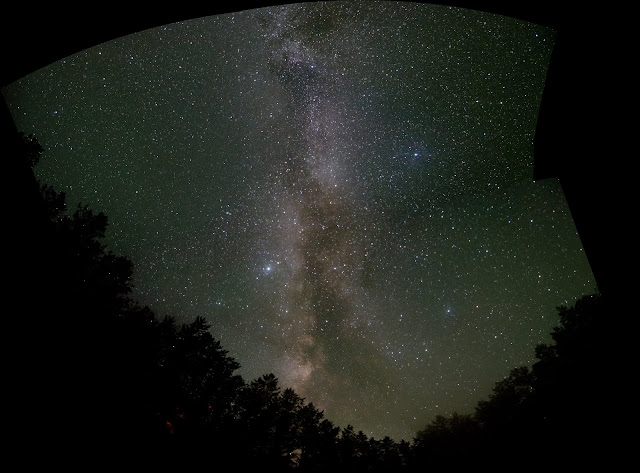 While I was looking around, I kept seeing faint fuzzies just about everywhere I looked.  I looked up at the handle of the Big Dipper, and I swear to you, I saw a fuzzy splotch down and to the slight right of Alkaid, the star at the end of the handle, as well as two splotches above and slightly to the right.  One of the students noticed this too.  I am like 95% sure that I was seeing M51 and M101 naked eye!  It was that dark.

Once the capture of all of those was complete, it was about quarter till 2 AM, and I decided it was time for bed!  I wished I could have gotten the color data for the North America Nebula while I was there, but I had to sleep.  Between the early wake-up call and the fact that I was driving back home the next day, I had no choice.  Plus, it was pretty chilly and damp!

After I got home, I quickly got to work on processing, since I was really excited to see how this was going to come out.  After all, the subframes looked fantastic in themselves.  Due to the low numbers of color frames I collected though, the noise level was relatively high in the RGB channels.  But since the sharpness comes from luminance, not chrominance, I clipped the black end of the histogram pretty deeply, and cranked up the denoising, on each of the color channels before combination into a single color image. 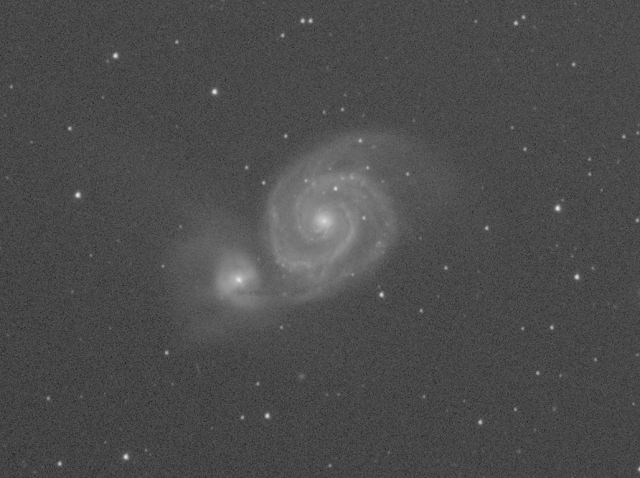 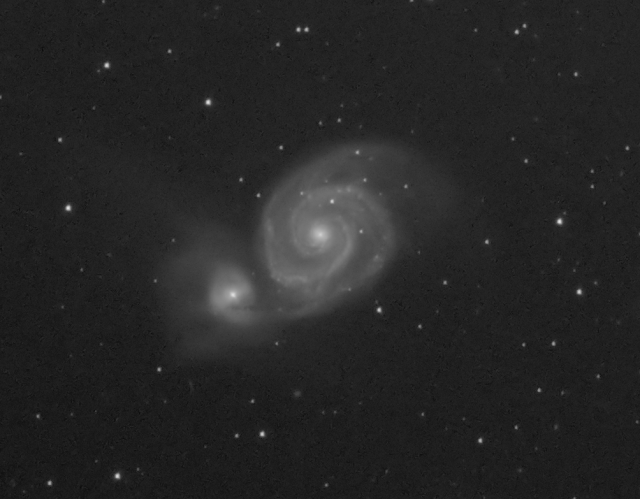 You lose some detail when you really crank up the denoising in Camera Raw Filter, but you'll get it back with the sharper luminance channel, which will have a higher signal-to-noise ratio since it's collecting the whole visible spectrum of photons and not just a fraction.  I also have more luminance frames than each RGB channel.

After figuring out that trick, my M51 image came out spectacularly!  It's amazing what some dark skies will do for your signal-to-noise. :D 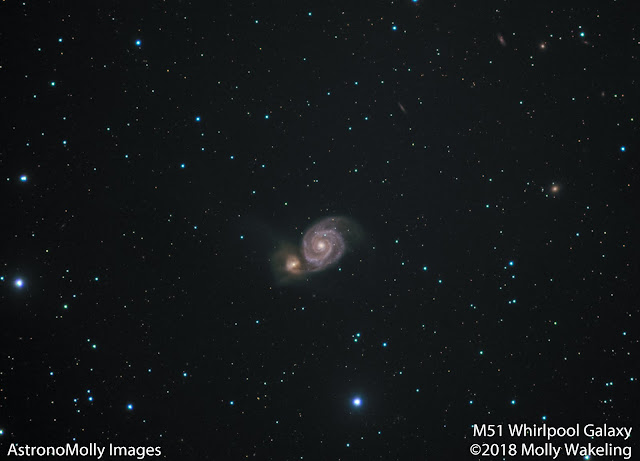 Woweeeeeee!!  Not only is M51 gorgeous, but you can see several smaller galaxies in the upper right.  Hover your mouse over the image on AstroBin to see what they all are.

The next morning, that 7 AM musical wake-up call was pretty rough.  But a few cups of coffee helped make it better, plus the fact that I knew I had acquired some awesome data that I could not wait to process.  Not only that, but I got to show over 40 bright, talented high school seniors some of the wonders of the night sky, and how it is possible to capture even more incredible views with consumer equipment rather than the Hubble Space Telescope.

In addition, I tagged along on an out trip to the National Radio Astronomy Observatory (the Green Bank Telescope), which was the second time I got to see it (also at last year's Green Bank Star Quest).  But this year, I was prepared - last year, they told us to turn off our phones when we got close to the big scope because of how sensitive it was to electronic signals.  Even having it on airplane mode wasn't enough, so I didn't get to take any pictures up close.  This year, I bought a disposable camera (remember those??) from the gift shop, and I advised the students to do the same (they bought a couple and shared, since each had 27 exposures).  I finally got my selfie!  But I still have a few more exposures to take before I bring it over to Walgreens to get it developed.

I'm so glad I got the opportunity to present at the National Youth Science Camp, and I hope I can make it back next year!


Table of Contents
Posted by AstronoMolly at 2:40 PM