Saturday night was our monthly Members Night for the astronomy club, where many of us gather at the observatory to share potluck dinner, good conversation, and telescopic views.  The sky was clear, which was the first clear Members Night since September!  And boy what a clear night it was.  Crystal clear, decent seeing, not a single little cloudlet.  It was going to be a good night.  We had at least 20 members present, if not more, including several new members.

Before dinner, I pulled out the club's 60mm Lunt hydrogen-alpha scope to check out the sun.  No sunspots, but once the etalon warmed up, I could see a few prominences rising up off the surface.  I found a pressure tube setting where I could see the granularity and the prominences at the same time, which was awesome.  I connected my ZWO ASI1600MM Pro camera to it next, and first I imaged the granularity at a short exposure time, and then I did two longer exposures to see the prominences. 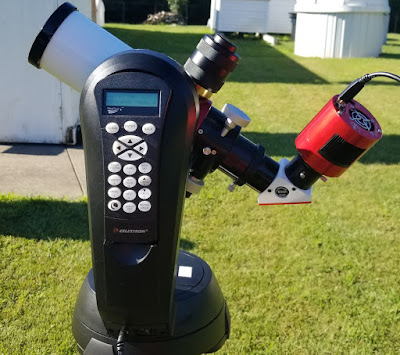 To composite the short and long exposures together after I averaged & sharpened the video sequences in RegiStax (click here for a tutorial), I followed this tutorial, which was pretty easy.  Now, the resulting image is monochrome, since I'm using a monochrome camera, and the hydrogen alpha filter only passes a single wavelength of light: a deep red centered on 656.3 nm. 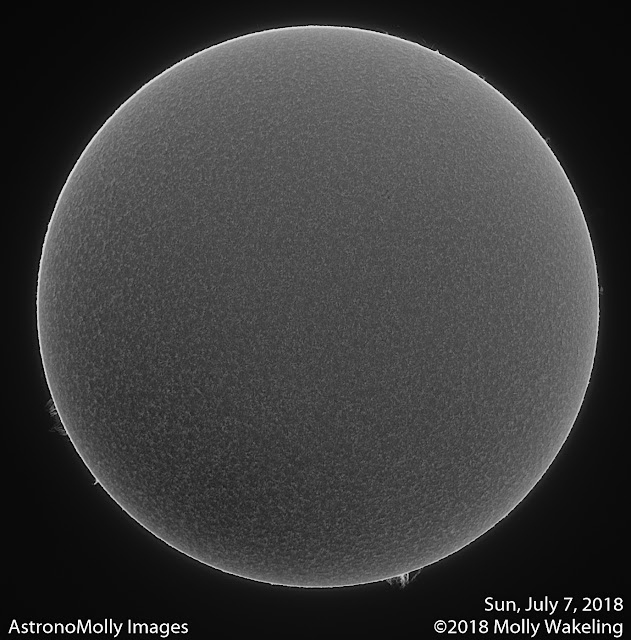 So this is actually one of the earlier steps in the combination process, where you take the difference image between the short-exposure and long-exposure images in order to line them up.  But it looked so cool, I had to save it!

In order to make a color image that is pleasing to look at, however, many solar astrophotographers color the grayscale image to be the color we expect the sun to be: sort of an orangish-yellowish ball.  In fact, the sun's light peaks in the green part of the spectrum (why the grass is green and our eyes are most sensitive to green), but the sun won't look green.  The first time I imaged with the H-alpha scope, I found a color balance that produces this pleasing color. 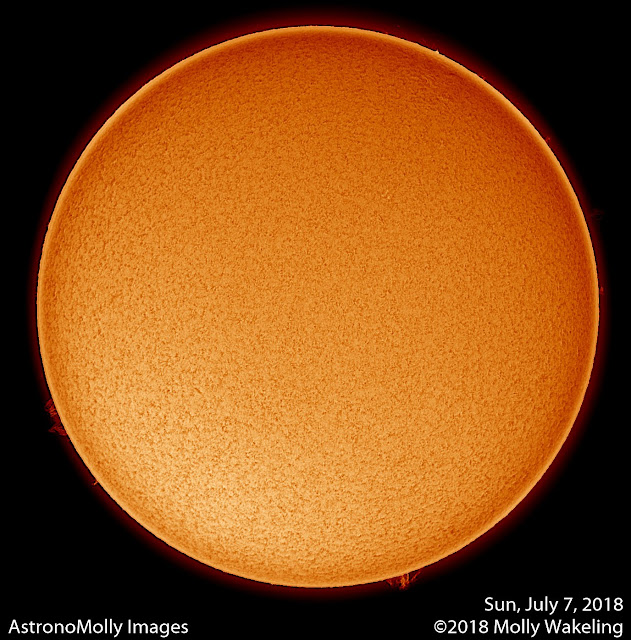 The color balance settings I use in Photoshop, under Image -> Adjustments -> Color Balance

The glow around the edges is from the fact that at the longer exposure time, the bright light from the edges of the sun's disk will bleed over into neighboring pixels because they are saturated.  Those prominences came out really nice!  This was a fun experiment.  But only the first experiment of the day.

The club's 5-inch Vixen refractor that I've been using so much in the last year was set to be used by club members for training on it that night, so I decided to do the experiment I've been wanting to do since I got the Celestron Advanced VX last fall: attempting to image on my 8-inch Schmidt-Cassegrain, using my Borg 76mm refractor to guide.  I wasn't sure if it was going to work because the weight was pushing it for an astrophotography setup - 13 lbs for the C8, 4 lbs for the Borg, and about 2 lbs for the camera, guide camera, filter wheel, and field flattener all together.  This makes for a total of about 19 lbs, and the payload capacity of the AVX (not including the counterweights) is 30 lbs.  The rule of thumb for astrophotography is you don't want to exceed about half of the payloard capacity of your mount.  Plus, since the Borg rides atop the C8, I was worried about it sagging, as well as flexure.  But I wanted to test it out! 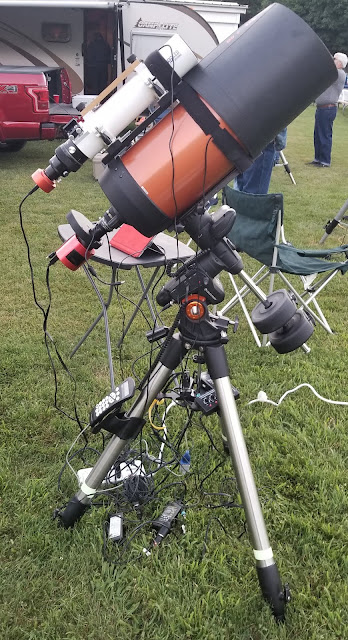 Please ignore the disaster of cables.

Once it finally did get dark, one of my fellow club members, John, had offered to show me how polar alignment with the QHYCCD Polemaster worked.  He brought his laptop over and we got it attached to the polar scope port of my AVX using the same adapter he has for his own AVX.  We went through the procedure with a small crowd of other interested people watching, and it went smoothly.  It was pretty easy, and it can be used on all sorts of mounts, including those little sky trackers you throw a DSLR with a lens onto.  I still think the SharpCap program's method is faster, but this is great too.

Once that was done, I aligned, calibrated the autoguiding program PHD, and started taking test images (see this tutorial on guiding).  It was already 11 PM by this point, since it doesn't really get dark until after 10 PM at least, so I picked a target that was bright enough to do short exposures on, but was also small enough to take advantage of the fact that I was using my C8: M57, the Ring Nebula.  Now, I did have a focal reducer on the C8 - I wanted the best chance of success, and a shorter focal length takes longer to show tracking errors.  The Ring ended up a little small, since with the f/6.3 focal reducer the effective focal length shrinks from 2032mm to 1280mm, which thus reduces magnification.  But it was still a good size, with some cropping.  I took a 2-minute subframe, and then a 5-minute - and the stars didn't look too bad!  Very exciting. 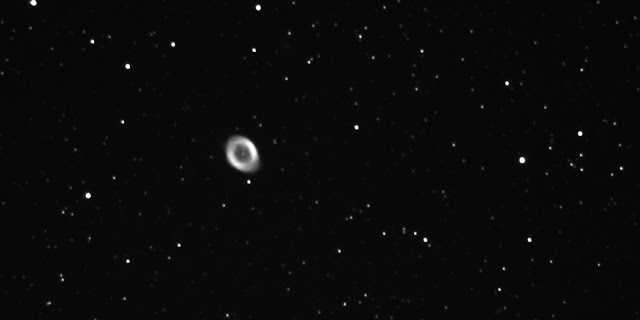 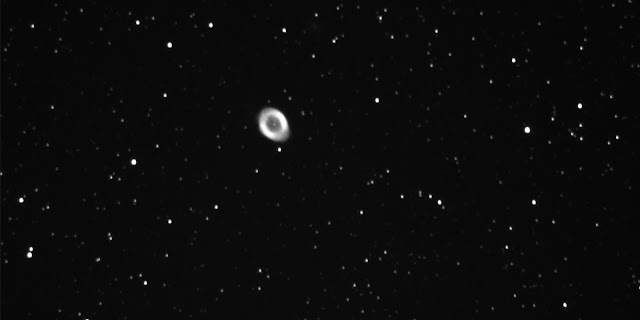 The stars aren't perfectly round, but there may be some settings I can tweak in PHD to make the guiding better.  The seeing also wasn't spectacular that night, which affects guiding.  But I would still call this experiment a success - the guiding looked a lot better than I thought it might!  My fellow club members were amused by my shouts of joy at how well this was working. 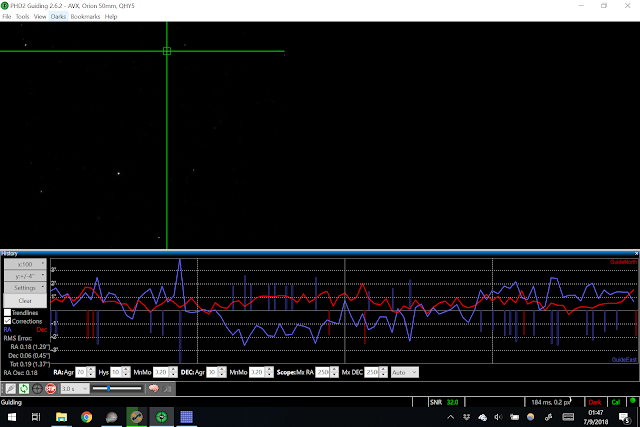 Since it was getting later in the evening and I had to be up at 7 AM the next morning, I only had about half an hour if I wanted to get any images that night.  It's been a long time since I've had a long-focal-length telescope I could use reliably - since I got my CGE Pro mount last May, it's too hard to set up my 11-inch for just a single night, and I've been having problems with it anyway.  Having the 8-inch SCT work on my AVX mount is a huge boon - it means I'll be able to do long-exposure, high magnification imaging on a mount that doesn't suck to set up and tear down.  I miss imaging galaxies and planetary nebula!  I decided to conduct a third experiment that night then - super-short exposure astrophotography.  The ZWO ASI1600MM Pro is well-suited for this endeavor with its high sensitivity and low read noise.  So I set the gain to the "lowest read noise" setting (which is its highest setting of 300 - you get low read noise at the cost of higher dark current and reduced dynamic range), and chose 10-second exposure times.  Now, normally when people do this (and I have seen some incredible images of planetary nebula using this method), they take many hundreds of subframes, and do an image-quality ranking to take the best so much percent, just like the "lucky shot" technique of planetary imaging, as a way to beat atmospheric turbulence.  I didn't have time for hundreds, but I did get a total of 111 frames (one downside of Sequence Generator Pro is that it takes several seconds to download an image, as opposed to SharpCap's ability to display images in a fraction of a second).  The result isn't too bad! 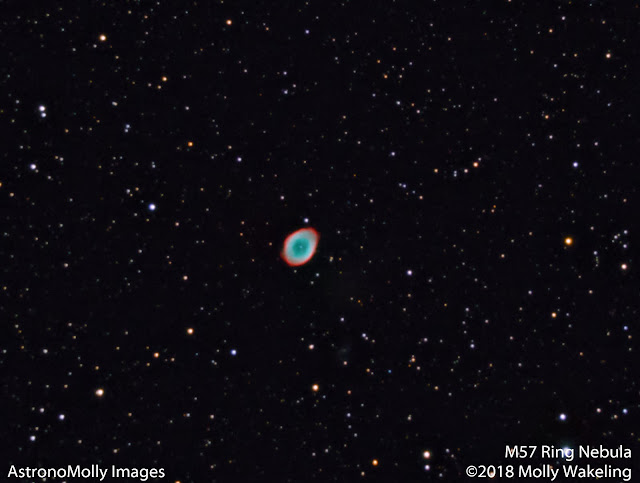 Now, keep in mind that I was using my 0.63x focal reducer, which makes the field-of-view much larger, so the nebula was actually fairly small in the full-size image.  But with 16 megapixels to throw around, you can afford to crop images.  This is because the pixel resolution is a lot smaller than the real resolution you'll get with atmosphere - my ZWO on the 8-inch with the focal reducer yields a resolution of 0.61 arcsecs/pixel (calculated with my favorite calculator here), and the seeing is usually 2-3 arcsecs of blurring where I live.

I would like to point out a few really exciting things about this image that make me love my ZWO ASI1600MM Pro even more.  The first is the white dwarf star at the center of the nebula.  It has a magnitude of 14.8, which is quite dim, making the star difficult to see visually in many telescopes.  This camera is sensitive enough that you could see it in the single 10-second frames!  Not only that, but in the stacked images, you can make out magnitude 15.4 galaxy IC 1296 down and to the right of the Ring Nebula, and this is only 18 minutes of total exposure!

Another thing I'd like to show here is how easily you can see the differences in the color filters.  Since every image is monochrome on this camera, I have to label my images carefully to make sure I know which filter I used for it.  For some targets, it's hard to tell the difference between one filter and another, since the target might glow about the same in each of the colors (white light).  But the Ring Nebula exhibits interesting structure with where the colors are. 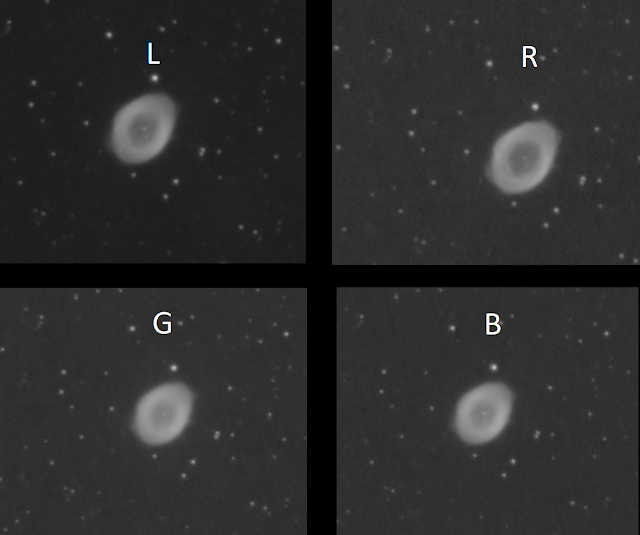 Stacked, stretched, and de-noised images for each of the filters.

Especially in the red frame, you can see very different parts of the nebula than the green and blue components, and even a little bit higher level of detail in the ring structure.

All in all, I call this night successful!  Three experiments were accomplished with awesome results: compositing solar images, guiding my 8-inch SCT on my AVX mount, and doing super-short exposure imaging.  What an exciting night!

Table of Contents
Posted by AstronoMolly at 1:03 PM