It was one of the most-talked-about astronomical events of the year -- the Great Conjunction of Jupiter and Saturn!  The two heavenly bodies appear close to each other from our perspective about every 20 years, but are not usually close enough to be a big deal.  The last time, in May 2000, they were 68.9 acrmins apart, or a bit more than two full Moons side-by-side.  This year, however, they would draw as near as 6 arcminutes apart -- nearly on top of each other.  The last time they were this close was back in 1623, in the days of Galileo; however, the two planets were close to the Sun, so it is likely that nobody witnessed it.  Before that, there was the Great Conjunction of 1226, in the time of Genghis Khan, which was visible at night.  Luckily for us young folk, the next close pass of Jupiter and Saturn will occur in only 2080, which some of us may live to see.  (For more info, see this article in Scientific American).

I had put the event on my calendar some time ago, probably back in 2019, and set reminders for myself so I could prep.  Of course, with all the chatter on the Internet, how could I forget?  I started working up a plan back in the fall, and in the days leading up to closest approach, I did some test runs.

About a week before the actual night of closest approach, I saw on SkySafari that the two planets were close enough to catch in my refractor, and since it's positioned in such a way that I could see the two shortly after sunset before they disappeared behind the tree, I nabbed a video on my one-shot color ZWO ASI294MC Pro camera and produced an image. 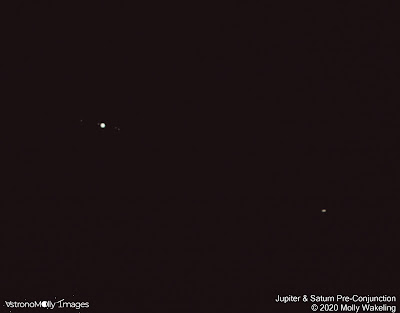 I couldn't get AutoStakkert to align the frames because of the two separated targets, so I just had PIPP (Planetary Image Pre-Processor) sort them by goodness and I pulled the best frame from each of the two videos (one for Jupiter and one for Saturn, because of the two different exposure times needed) and combined them in Photoshop.  So it's a little blurry, but still cool to see them so close!

Because they were only going to be six arcminutes apart, I was going to be able to throw a lot of magnification at them and get a nice shot.  I decided to use my Celestron 8-inch Schmidt-Cassegrain, which has excellent performance on planets.  It currently is seated on my Paramount MyT, and I've been using it for deep-sky imaging all year.  Unfortunately, the Paramount was on the wrong side of my backyard to be able to see the conjunction, which was low in the western sky -- my enormous lemon tree blocks the view.  So I went old-school and pulled my Celestron NexStar SE alt-az mount out of the garage, which I primarily use for outreach (back when we could do that in-person) and for planetary imaging that I can't reach from my backyard.  The nice thing with using an alt-az mount for this transient events is that I don't have to polar align it or even have a decent alignment model -- I can just plop it down, point it at a planet, and say "track this," and it does a decent-enough job for the short exposures of planetary imaging.
For the camera, I decided to use my monochrome CMOS camera, my ZWO ASI1600MM Pro.  I always get better results on it, and I can get higher-resolution images from it because a) the pixels are smaller and b) every pixel is used instead of interpolating 2x2 quads of pixels to produce color images the way one-shot cameras do.  The downside is that I have to be quick on the draw, changing filters and nabbing frames as fast as possible to get all three colors before Jupiter rotates appreciably, which is a timespan of about 90 seconds.  Luckily, I'm quite practiced at it.  I used my Astronomik RGB filters in my ZWO electronic filter wheel, and I removed the focal reducer for maximum resolution and magnification.
The laptop I typically use with my primary rig is an old Lenovo from 2012, named Feynman, that I refurbed with a solid-state hard drive.  It performs quite well, but only has USB 2.0, which limits my frame rate to about 1 fps full-frame.  My other data acquisition machine is my Microsoft Surface 3 tablet, named Messier, which is also getting on in years and has been slowing down significantly, even after an operating system clean re-install.  It has USB 3.0, but I knew I wouldn't be able to livestream from it, which I was planning to do with Explore Alliance.  So I decided to spin up my performance laptop, named Cherenkov, which is an MSI I bought myself for Christmas in 2018 for grad school use and star party on-site image processing use.  I moved my table over, and brought out a light so I could be seen on camera, as well as my webcam and mic (the built-in ones on this laptop are terrible).  I got SharpCap Pro and all my camera and filter wheel drivers installed. 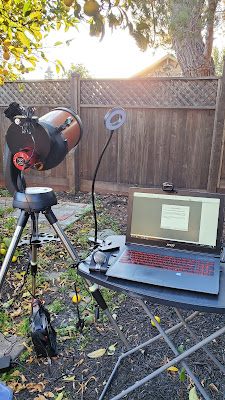 I tested out the whole setup on December 18th.  After a couple of issues with not having all the drivers I needed installed, I got everything rolling, and got my Streamlabs OBS settings set up how I wanted.  Once it finally got dark enough to spot them, I got the mount aligned on them and started imaging.  Everything went pretty smoothly -- I have a lot of experience in getting set up now!
Jupiter and Saturn were already close enough to image at prime focus, without the focal reducer!  I had some trouble processing the images though still.  I even used PIPP to do some pre-alignment, but still couldn't quite get it to go.  I hoped that it would be easier once they were closer together.

The night finally arrived!  I had actually delayed by travel home for Christmas when I bought my plane ticket back in October so I could be at my house for the conjunction.  Dedication :D
There were some clouds in the west before sunset, and I was getting worried.  But they were kind of patchy, so I hoped to at least manage some shots through them.  Fortunately, they cleared out after sunset!  Then it was just a waiting game for Jupiter to become visible so I could align the mount.  I had moved it around since the test drive, so I had to re-align it.
Since I had put the C8 back on my Paramount for deep-sky imaging, it was out of focus, which would make landing on the planets more difficult and waste precious time.  So I picked up an moved the mount so that I could see the Moon and use it for focusing.  Then I moved it back over to the spot for the conjunction.
Finally, after peeling my eyes, Jupiter finally appeared a half hour after sunset.  Showtime!  I got the scope pointed at it and aligned, got them on the screen, and did some fine focusing.  I immediately started taking videos as soon as everything was ready -- I wasn't going to have much time before they sank below the fence line.  I also streamed the camera's view live on the Explore Alliance show for the conjunction.
I had to move the mount back a few times to keep the planets in the scope's view -- one downside of such a large aperture is that even though the finderscope was still well above the fence, half the telescope aperture was below it, and the planets were dimming significantly.  After getting a good round of RGB exposures, I took a luminance exposure to get Jupiter's moons, and then removed the camera.  I had promised myself that I would look at them visually, and I am so glad I did!  I threw on the star diagonal and 25mm Plossl eyepiece, and the two planets looked awesome side-by-side. It was super cool to see them so close together.

I finally managed to get AutoStakkert to play ball by having it only worry about the planet that had the right exposure (since I had to take two different exposure times for their large difference in brightness), and I got the red, green, and blue channels stacked for both Jupiter and Saturn.  I used RegiStax to apply the wavelet deconvolution to sharpen them up, and then I used PixInsight's FFTRegistration script to align each set of RGB frames and combine them into color images.  Then I brought them over to Photoshop to manually composite the Jupiter, Saturn, and Jupiter's moons exposures into a single image, and did some color correction and adjustments.  The final result came out quite nicely, despite how low they were in the sky! 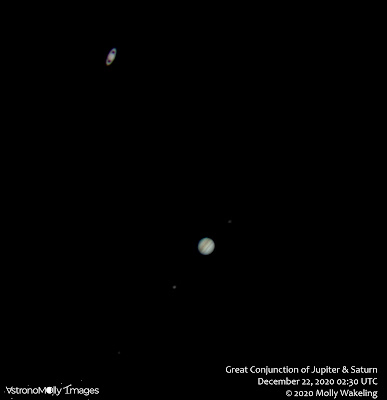 Not only was December 21st the night of the Great Conjunction, it was also the night of the first-quarter Moon, and only an hour or two after the conjunction, the Lunar X and Lunar V would both be visible!  The last time I shot the Lunar X was accidentally when I took my very first videos of the Moon using my DSLR on the very same C8 back in May 2016, and I had never imaged the Lunar V.  So I took advantage of not having the focal reducer in place and took some nice Moon shots.  I did move the telescope back over to the Paramount though, since it was going to be a clear night and I wanted to squeeze in another night of deep-sky imaging.  The seeing wasn't great, but they came out all right. 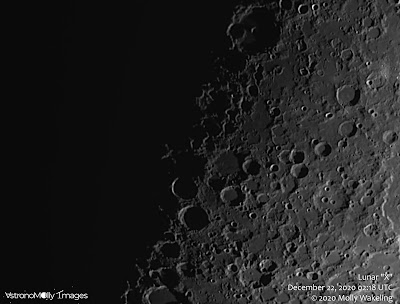 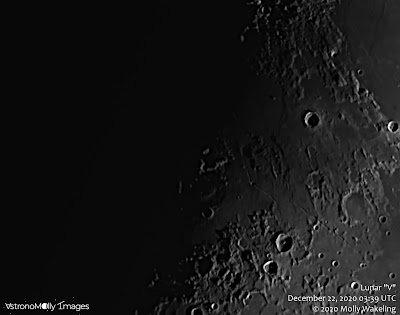