We haven't had a whole lot of clear nights here lately, so I have been trying to squeeze in some partial-nights of imaging when I can.  Unfortunately, the right ascension motor on my Celestron CGE Pro mount, the one I use for my science rig (for taking variable star and exoplanet transit data), has died.  So there will be a bit of a break in the science-data-taking while I get another rig set up.  After a talk I gave recently for the AAVSO 2020 webinar series, member Gary Walker, one of the leaders of the Instrumentation & Equipment section, offered to pass along to me a Celestron AVX mount as well as an older QSI 583 CCD camera.  I'm very excited to receive both!  The QSI camera should perform much better than the Orion Deep Space Monochrome Imager II I've been using on the science rig.  My Celestron AVX can't quite handle the 8" Newtonian I use on the science rig, but I think I got one that's on the lower end of their manufacturing tolerance -- I've seen people do better with their AVX's.  So I'm hoping perhaps his will perform better and I can use the Newt with it.  Regardless, it will be put to good use -- I've always got some kind of plan rolling around in my mind. :D

Meanwhile, the plethora of planets in the evening sky has been taunting me for weeks!  Normally I would set up my outreach rig and do some planetary imaging -- my 8" Celestron Schmidt-Cassegrain on my Celestron NexStar SE mount.  However, since I gave up on using my 11" SCT, I've been using the 8" all summer, and plan to keep it on my main imaging rig throughout the winter.  So I decided to spend a few evenings on the planets, and I swapped out my deep sky optics train for the planetary one.

For deep sky imaging, I use a 0.63x focal reducer/field flattener on the C8 to decrease the focal ratio from f/10 to f/6.3 (making the scope "faster") while widening the field of view.  The reducer puts me at an effective focal length of 1280mm, which gives me a large enough field of view to image most nebulae (except for the very largest ones), but not so large that I can't do galaxies and planetary nebulae.  However, for getting the best resolution on solar system objects, you want a looooooong focal length -- as much magnification as you can get away with given the aperture of your scope and the seeing conditions.  I previously used a Celestron 2x Barlow, but always got a bit of chromatic aberration from it, so I finally upgraded to a Baader Hyperion 2.25x earlier this year, and finally gave myself a chance to use it.  So I swapped out the focal reducer for the Barlow, and I also took off my PrimaLuce Esatto focuser because the last time I tried this, I had some trouble with it being too close to the scope and hitting the focuser knob. 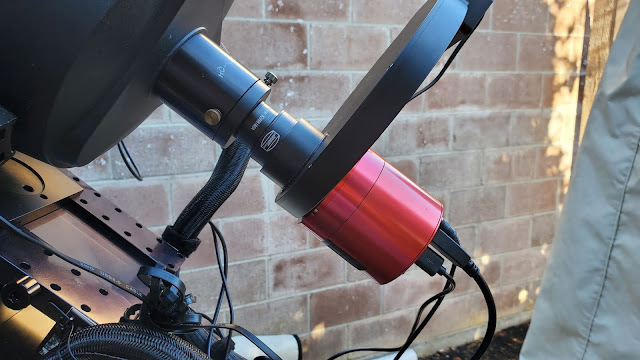 After weeks of wildfire smoke, the air quality app on my phone reported an AQI (air quality index) of less than 10 -- a huge change from the 100-200 we've been having!  And on the few nights it hasn't been smoky, there's been clouds and haze.  But it was crystal clear, finally!  Now I just had to hope that the seeing was good.
The westernmost planet in the lineup is Jupiter, so I started there.  I got several videos on it using SharpCap and rotating through my red, green, and blue filters before it slipped behind my lemon tree, and the seeing was decent, and the image came out all right!  Bonus points: the Great Red Spot was prominently featured, and Europa was just to the side, about to pass behind the planet. 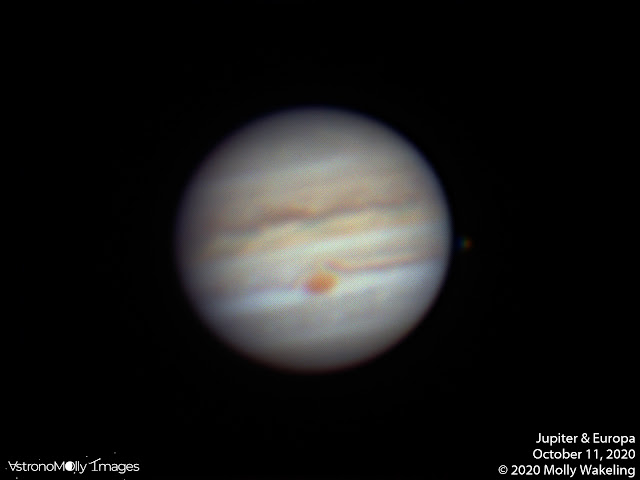 Date: 11 October 2020
UTC: 12 October 2020 02:14
Location: East Bay area backyard, CA
Object: Jupiter (and Europa)
Attempt: 26
Camera: ZWO ASI1600MM Pro
Telescope: Celestron C8
Accessories: Baader Hyperion 2.25x Barlow, ZWO 2-inch 7-position EFW, Astronomik RGB Type 2c 2-inch filters
Mount: Paramount MyT
Frames: Best 20% of 1-2,000
FPS: 13-16
Exposure: R: 60 ms
G: 60 ms
B: 75 ms
ISO/Gain: 200
Acquisition method: SharpCap Pro
Stacking program: AutoStakkert 3.0.14
Processing program: RegiStax 6, PixInsight 1.8.8-6
I am so happy that I took the time to swap out the focal reducer for the Barlow.  Having the extra magnification is making this awesome!
One of 79 known Jovian moons, Europa was discovered in 1610 by Galileo and is one of the four moons easily visible with binoculars and small telescopes. It's a little smaller than our own Moon, but it has a water ice crust and thin oxygen atmosphere. Due to its very smooth surface, it is thought that a water ocean exists beneath the surface, which could harbor life. Future NASA missions are planned to explore that possibility.
We also have a nice view of the Great Read Spot here. The GRS is a massive storm that has existed for at least the past 360 years, when it was first observed. Within the cyclone, windspeeds can reach 268 miles per hour -- much higher than Earth's hurricanes. The storm is 1.3 times the diameter of the Earth!

Saturn has got to be my favorite to observe visually.  In my C8, it comes in sharp and clear, and it really looks like someone is holding a picture up instead!  I've only come close to imaging it as well as I can see it visually once or twice.
Unfortunately, I spent too long on Jupiter, and Saturn didn't stick around long enough for me to get all three color channels on it, unfortunately.  However, I originally set the scope up for planetary imaging on Friday night, although I only got Saturn before clouds rolled in.  So here's the one from Friday: 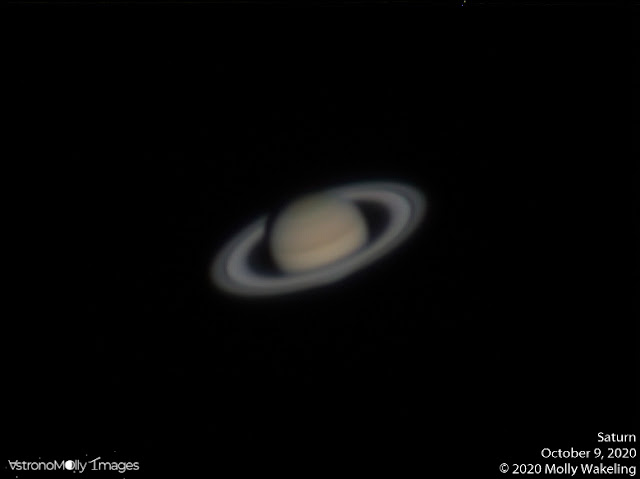 While I was waiting for Mars to peek out from behind my neighbor's garage, I went and nabbed a more difficult target: Neptune.  I've only imaged it a few times in the past, but it's a lot easier to get into my camera's crosshairs on the Paramount MyT than on my Celestron NexStar SE.  However, I need to make a better pointing model for the MyT; its slews are off by a decent bit, and I wound up having to sync on a nearby star to get Neptune in the image, which required me to go outside and actually look through my red-dot finder because the field-of-view was so small with the Barlow attached (only 13x10 arcsec).  But I finally did get it in my sights. 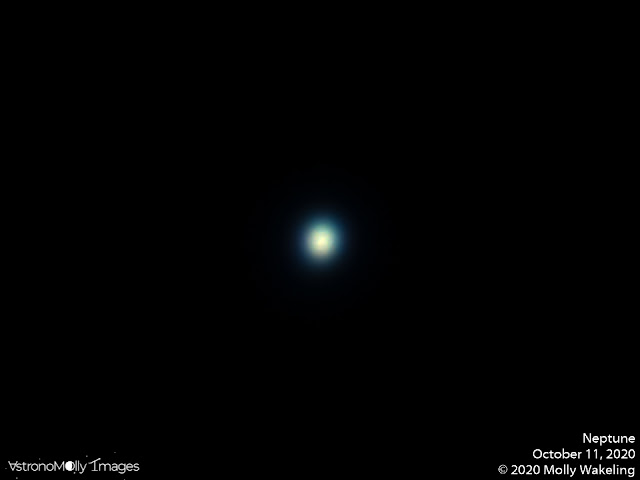 Mars reaches opposition in October 13th, which is why it is so big and bright in the sky!  Now is the best time to image it.  Luckily for us this year, it's reaching opposition at a time of the year and time of the night when the ecliptic is also quite high in the sky -- it culminates at nearly 58 degrees high for me right now!  Higher altitude = better atmosphere, since you're looking through less of it.
I spent a good chunk of time on Mars, and waited around for times of better seeing.  Of the 5 datasets I collected, #3 came out the best for me. 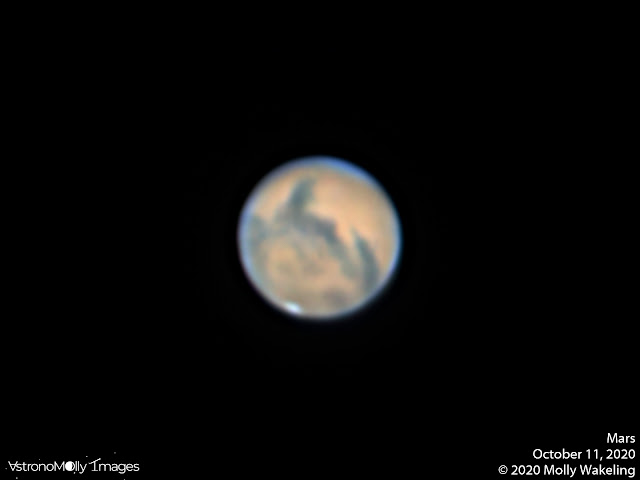 Date: 11 October 2020
UTC: 12 October 2020 05:22
Location: East Bay area backyard, CA
Object: Mars
Attempt: 19
Camera: ZWO ASI1600MM Pro
Telescope: Celestron C8
Accessories: Baader Hyperion 2.25x Barlow, ZWO 2-inch 7-position EFW, Astronomik RGB Type 2c 2-inch filters
Mount: Paramount MyT
Frames: R: 50 ms
G: 50 ms
B: 80 ms
FPS: 20
Exposure: R: Best 20% of 2,004
G: Best 20% of 2,001
B: Best 20% of 2,001
ISO/Gain: 139
Acquisition method: SharpCap Pro
Stacking program: AutoStakkert 3.0.14
Processing program: RegiStax, PixInsight 1.8.8-6
The reddish hue of Mars' surface is a result of the iron oxide that resides in the dust on the surface. Mars has a thin atmosphere, which you can see at the edges of the planet as we look through it edge-wise. It is believed to have had a much more substantial atmosphere, but since the planet lost its protective magnetosphere 4 billion years ago, the solar wind has been stripping it away. The pressure on the surface is about the same as being at 22 miles above the Earth's surface, and it contains only traces of oxygen.
Visible at the bottom of the planet is the southern polar ice cap, which is a combination of carbon dioxide ice and water ice. The darker areas have less of the red dust, which is why they appear darker.
I managed to get a fair amount of detail -- not the most I've seen from other imagers, but still cool!  I'll need to keep an eye on the seeing forecasts and give it another go here in the near future.

Wrapping up our solar system tour for the evening (very late evening) is Uranus.  By the time I finished Mars, I figured I'd take one dataset on Uranus, and then finally get to bed.  I've also only imaged Uranus twice. 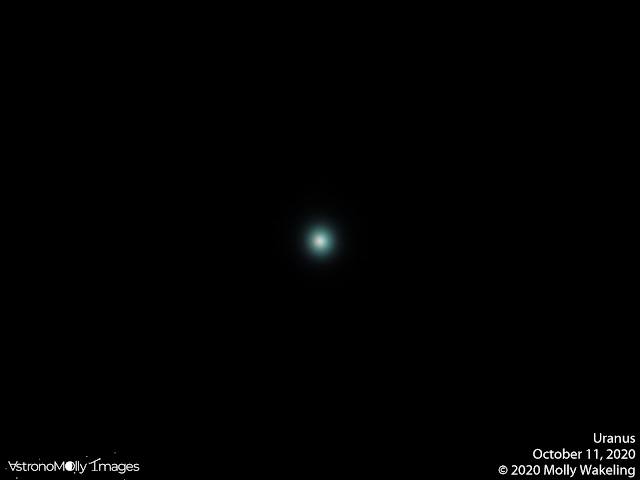 I need to update my planetary processing tutorial with my new methods, but until I finally have time to do that, here's the rundown.
Planetary processing is much quicker than deep sky.  I can crank through a dataset in about 10 minutes, including the documentation.  There are probably some more techniques I need to learn to get the most out of the wavelet deconvolution, though.
Planets are a fun diversion from deep-sky imaging, and they provide some quick satisfaction!
Next post: #457 - Monday, December 21, 2020 - Conjunction Junction
Previous post: #379 & #380 - Saturday & Sunday, July 18-19, 2020 - Family camping, auto-guiding the Star Adventurer, and my new trailer!!
Table of Contents
Posted by AstronoMolly at 9:55 PM